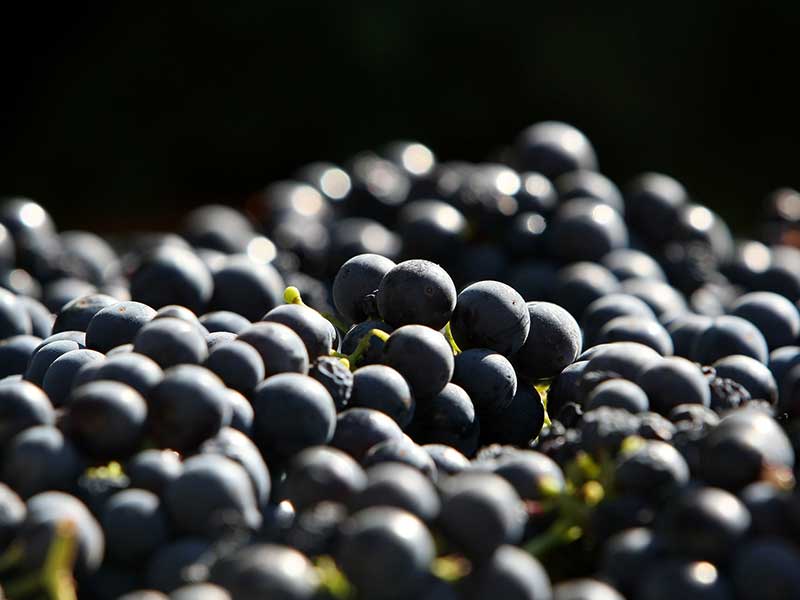 Located in northern California, Napa Valley is the heartland of West Coast wine. Its flowing, textured landscape is freckled with 43,000 acres of planted vineyards that are hydrated by the meandering Napa River. To the east, the Vaca Mountains shield the valley from the blazing Sacramento sun, while the rolling Mayacamas in the west protect it from the coastal breeze of Sonoma.

With its temperate climate, expert growers and diverse volcanic soils, Napa has won a formidable reputation for producing some of the world’s finest Cabernet Sauvignons, attracting more than 3.5 million tourists to the valley’s wineries last year.

Bursick has been dealing with vineyards for almost 40 years and is part of the generation that turned Californian winemaking into a global phenomenon. Yet, while he and his contemporaries have traditionally developed wine in the north, Bursick has recently turned his attention 500 miles south, to a new phenomenon that is sweeping Temecula Valley.

Acquiring a taste
The development of Temecula is an underdog story. A decade ago, its vintners undertook an ambitious plan to revitalise the region by 2020, transforming it from a local winery hotspot into a destination “known and respected worldwide”. Since then, the quality of its produce has improved considerably, and various steps have been taken to protect the countryside.

With critics ruling the roost, the stigma surrounding Temecula’s wines has endured and even become entrenched in most people’s minds

Today, this process is being met with a wave of tourism and investment from China, which could see the 2020 project come to fruition – albeit later than scheduled. For the first time, Temecula could be about to find its place ‘on the map’, competing for tourist dollars with the likes of Paso Robles and even Napa Valley.

In the 1980s, Temecula’s wine growers were generally retirees who, after years of sweating in city jobs, decided to live the dream of owning their own vineyards. Unfortunately, their lax approach to winegrowing meant the quality suffered. “They just didn’t understand what to plant where,” Bursick said. “It’s a Mediterranean climate there. The Spanish varieties do well, some of the Portuguese varieties do well. You can’t grow Pinot Noir there but people try! Still, why not stick with Grenache or things like that?”

As such, many critics who had tasted the region’s produce in the late 20th century still consider it substandard to this day. For example, Terence Clancy, a wine industry executive, once described Temecula’s wines as “smelling like burned tires and rotten vegetables”, while others have suggested they are too sweet, too basic and generally out of balance. Worse still, with such critics ruling the roost, this stigma has endured and even become entrenched in most people’s minds.

Given its lagging reputation, the majority of the region’s tourists continue to be novice wine drinkers from nearby Los Angeles or San Diego. Meanwhile, hardcore oenophiles – particularly those from overseas – prefer to visit California’s other vineyards, such as Sonoma or, better still, Napa.

No more sour grapes
But things soon changed for the better in the late-1990s, when Temecula got a blessing in disguise as a wave of Pierce’s disease wiped out roughly half of the valley’s wine crops. It would be another year before yields were stable again, but the destruction allowed for a fundamental overhaul of the area’s struggling vineyards.

“It gave us an opportunity to reinvest in the land and the product,” said Devin Parr of the Temecula Valley Winegrowers Association. “There has been increased investment from owners in the area giving their winemakers the tools, equipment and technology both in the vineyard and in the winery to make the best possible wines.”

This new, pro-investment approach was also driven by a change in management; when their crops died, the old breed of retirees had the choice of either spending time, money and energy on resurrecting their vineyards, or cutting their losses and selling their land to younger, more serious business investors.

“Nowadays, it’s true professionals – ‘big money’ – coming out, investing and competing with the old school, using modern technology, root stocks, modern winemaking and spending the money to make quality products,” explained Bill Wilson, a Temecula winery owner and Chair of the committee for the 2020 rejuvenation plan. “That’s been the revolution and the change.”

Chinese hedge funds and investment companies have moved into the region, harbouring the ambitious goal of attracting Chinese
tourists to Temecula

After more than a decade of reform, there is plenty of evidence to suggest the region’s new approach has started to work: in 2015 and 2016, Wine Enthusiast reviewed more than 80 of the valley’s wines and gave roughly half of them scores of 90 percent or higher – an admirable score for any region.

“It has [improved], but Temecula is a mixed bag,” said Robert Whitley, a journalist and wine critic based in San Diego. “You can find extraordinary wines there and you can find just passable fine wines… the real big change in Temecula in the past few years is the move towards planting more Mediterranean varietals. That’s where I see exciting things going on.”

Through the grapevine
This upsurge in quality has already put Temecula on the map for wine-lovers. “Most of the everyday, base business is coming from southern California,” Wilson told Business Destinations. “But Canadians, people from England, from all over the world are coming here, and recently I’ve seen that more.”

Another factor helping Temecula Valley’s development is the specific type of new investment that emerged during the mid-2000s. Although US investors had traditionally been eager to buy Californian wine properties, the financial crisis caused reluctance and uncertainty. “At a time when the US was scared to spend a nickel, the Chinese had millions and they were just gobbling up real estate,” Wilson said. “Money has been flowing into these winery owners that are tired and selling at ridiculous prices.”

Early Chinese investors tended to be individuals who had moved to California hoping to sell wine back to China as a retirement hobby. More recently, Chinese hedge funds and investment companies have also moved in, harbouring the more ambitious goal of attracting Chinese tourists to the region. This has partly been spurred by President Xi Jinping’s crackdown on corruption, which has encouraged people to spend their money abroad.

The best of many examples is the Twelve Oaks Resort, a 700-acre plot of land currently being developed into a vast winery. The finished resort, which is expected to complete in 2019, will include a Marriot hotel, an event space and several high-value properties. The project is being led by David Liu, a millionaire and property developer whose company, Standard Portfolios, is underwritten by Chinese money. Meanwhile, one of Bursick’s new clients in the south is Europa Village, a similar development project hoping to raise around $70m from Chinese investors.

A bespoke bacchanal
Last year, tourism spending in California rose by 3.2 percent to $126bn. In Temecula Valley itself, tourism is trending towards becoming a $1bn industry: in 2015, tourists spent $696m and, in 2016, traveller revenues are estimated to have been over $700m. Chinese visitors make up a growing proportion of this total influx, with more than 1.3 million Chinese tourists visiting the state last year. “We anticipate China as being the number one international market in 2018,” said Walt Wang, China Marketing Manager at Visit California.

Chinese tourists are particularly drawn towards Chinese-owned developments like Twelve Oaks because the owners tend to understand the needs of Chinese guests. “Chinese people visiting vineyards might be more hesitant to drink as much as people from other countries,” explained Christopher Ledsham of the China Outbound Tourism Research Institute. “People with Chinese-owned businesses are much more in tune with these sorts of things. They also have great contacts with tour operators and tourism industry-based companies within China, so that’s a head start.”

Meanwhile, US-owned businesses are adapting to facilitate the growing demand from Chinese visitors. California’s China Ready scheme has been operating for several months and provides educational seminars for businesses throughout California. In the scheme, wineries are encouraged to hire Mandarin-speaking tour guides, hotels are advised to provide hot food alongside more traditional continental breakfasts and restaurants are being shown the benefits of putting images on their menus.

Wang said: “We want to teach them how to package Temecula and the southern winery region to their current itinerary. Most of the Chinese visitors will definitely go to LA, because LA is one of the gateways from China to California.

“We want to push these visitors a little bit beyond the gateway to Temecula. California not only has Napa Valley, we also have Temecula. So, even if you don’t go to northern California, you can still have great wine and beautiful wineries. I think it’s very promising.”

Defining El Dorado
People tend to take vineyard holidays for one of two reasons: either they’re oenophiles searching for excellent produce, or they are casual drinkers hoping to supplement a trip with a good quality wine tasting experience. The changes currently underway in Temecula are developing the region’s appeal on both fronts.

The rising quality of wine makes the region more prestigious, attracting more tourists from the US and the wider world. Moreover, since Temecula’s finest wines are Mediterranean, the region has a unique feature Napa lacks. Consequently, seasoned wine-drinkers may be tempted away from the north when planning a trip to the Golden State. Temecula’s proximity to the southern cities also makes it a good destination for more casual drinkers making the journey from further away, something neither Napa Valley nor Paso Robles can offer.

Meanwhile, the trend towards Chinese tourism is adding to the region’s economy and helping it to gain global recognition. This is also helped by Temecula’s proximity to Los Angeles, as well as the Chinese management of local projects and the state-funded training being provided to existing businesses through schemes such as China Ready.

As such, the original 2020 plan is advancing in a very convincing way. “Over the next five years, this place is really going to be booming in a positive direction,” Wilson said.

Temecula will never be Napa, Sonoma or Paso Robles, yet that is most likely a positive thing. If the region can carve out its own identity as a destination for people seeking Mediterranean wine and build a reputation for providing excellent service to Chinese tourists, Temecula stands a good chance of – like any fine wine – improving with age.