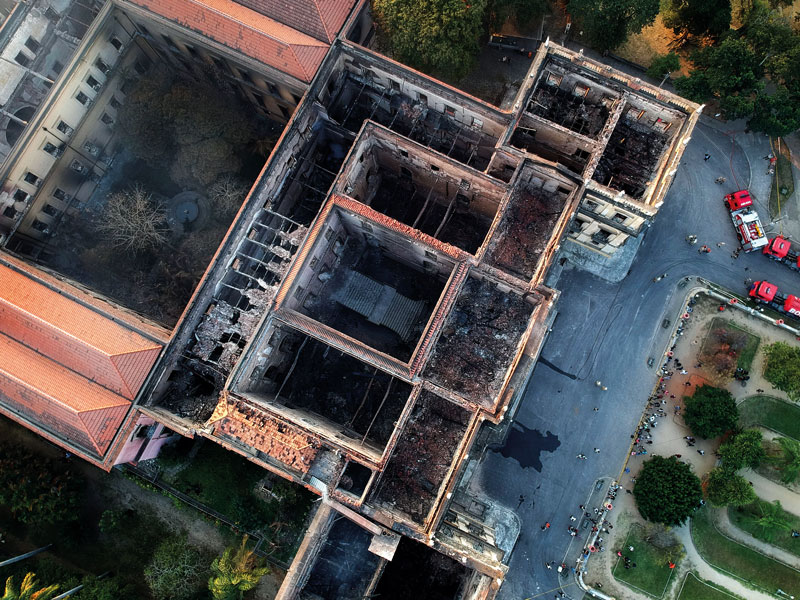 On the night of September 2, 2018, a fire ripped through the 200-year-old halls of Brazil’s Museu Nacional, or National Museum, in Rio de Janeiro. With no sprinkler system in place, there was nothing to stop the blaze from spreading, and when firefighters arrived on the scene they found that the nearby hydrants were dry.

The fire raged for hours, destroying around 90 percent of the 20 million items held in the museum and reducing much of the historic building – the former Imperial Palace – to an empty carcass. Researchers from the museum helped break down doors to salvage what they could of the work.

For more than a decade, experts had been warning that exposed electrical wires and a lack of modern equipment meant the National Museum was a serious fire risk

Out of the debris, some prized items were recovered, albeit damaged, including the 11,500-year-old remains of Luzia, the oldest human fossil found in the Americas. But for the most part, centuries of knowledge and decades of work were lost forever.

This destruction was not inevitable, but it was somewhat expected. For more than a decade, experts had been warning that exposed electrical wires and a lack of modern equipment meant the building was a serious fire risk. But the fire in Brazil was not an isolated incident. The International Council of Museums (ICOM) said in a statement following the disaster: “The ongoing trend of reduction in public expenditure on cultural heritage threatens the very existence of museums in many parts of the world.”

History of neglect
Brazil’s National Museum had long been underfunded. In fact, in 2018, the museum only received around BRL 98,000 ($25,400) from the government, and the year before it was forced to crowdfund in order to reopen a dinosaur exhibit that had been infested with termites. Meanwhile, the British Museum, which has a collection half the size, received a government grant-in-aid totalling £53.6m ($69m) for the year to March 2018.

Speaking on Canadian radio show As It Happens, Luiz Fernando Dias Duarte, the museum’s deputy director, claimed the museum would have survived the fire if it had received just a quarter of the funds the government put towards building a single stadium for the 2014 FIFA World Cup. “The loss is huge. It’s difficult to describe exactly the richness and the variety of the collections that were turned into ashes,” he said.

Marcus Guidoti, an entomologist who recently completed his PhD, studies lace bugs, or Tingidae, in Brazil. The National Museum held one of the most important collections of this insect family. When Guidoti spoke with Business Destinations, he said that, as far as he knew, essentially the entire insect collection in the main building of the museum had been lost.

Although one employee had saved a hard drive with some photos of the museum’s collection of Tingidae, photographs are a far cry from the actual specimens. “The loss remains irreplaceable,” he said. “The fact that this tragedy only happened because of the negligent behaviour of our authorities and the lack of interest and knowledge from the general public make everything even more hurtful.”

Burning anger
The fire at the National Museum has ignited a wave of anger from Brazilians who feel the situation reflects the larger political issues facing the country. The day after the fire, protesters gathered outside the museum and, as some fought to get inside the grounds, police in riot gear shot tear gas into the crowd. One person at the site was Rosana Hollanda, a 35-year-old high school history teacher who told the Associated Press (AP): “This fire is what Brazilian politicians are doing to the people. They’re burning our history, and they’re burning our dreams.”

In an article for CityLab, Tarcyla Fidalgo, a doctoral candidate at the Federal University of Rio de Janeiro, which owns the National Museum, wrote: “We may now be shocked at the destruction, but no Brazilian could truly claim to be surprised by this disaster… What was once a source of local and national pride has now become a symbol of Brazil’s failing infrastructure and ineffective local and national government.”

While mismanagement and corruption played a part in the loss of the museum, Fidalgo argued that blame also falls on a general carelessness the nation’s citizens and politicians have for their heritage: “In Brazil today, producing science and culture is increasingly a political act, and an act of resistance.”

For Guidoti, the loss was both personal and professional: crucial data for current and future research projects was destroyed, but he also lost a place where he could explore his connection to Brazil’s history. He told Business Destinations: “I remember being always happy to step [on] the wooden floors and walk around those old walls, thinking about all the history that took place in there. So watching the palace basically burning to the ground was very, very sad. It felt like part of the country was burning as well.”

Global concerns
In Brazil, the lack of government funding provided for the arts and sciences is a chronic problem. Gudioti said that from what he has seen when visiting the country’s most important biological collections, no one is really prepared for a disaster like the National Museum fire. In fact, another fire wiped out huge collections of biological specimens at the Instituto Butantan in São Paulo in 2010, and in 2015, the Museum of the Portuguese Language was also destroyed in a blaze.

Museums around the world are also dealing with similar issues. For instance, India’s National Museum of Natural History in New Delhi was engulfed in flames in 2016, leading to the loss of large collections of rare flora and fauna. At the start of 2018, about 60 percent of Indonesia’s Maritime Museum in Jakarta was lost to fire caused by a short circuit. In 2017, hundreds of artefacts were ruined at the Tatihou Maritime Museum in France, including three paintings on loan from the Louvre, after a lightning storm started a fire.

It is clear, therefore, that the problem is not unique to Brazil. “With some notable exceptions, the cultural sector globally is underfunded,” said Eric Dorfman, the president of ICOM’s subgroup for natural history museums (NATHIST) and director of the Carnegie Museum of Natural History in Pittsburgh, Pennsylvania. He added: “Looking after the safety of the collections from disasters like that has got to be a priority for funders.”

ICOM NATHIST released a statement in November that read: “ICOM NATHIST would like to express its deep concern regarding the preservation of natural history collections worldwide. These collections face unique and mounting risks regarding their preservation and care. ICOM NATHIST urges those entrusted with resourcing the stewardship of these treasures to recognise their value and ensure their ongoing protection”.

Canary in the coal mine
Soon after the fire at Brazil’s National Museum was extinguished, officials said the federal government would put BRL 15m ($4.03m) towards restoring it. But there are worries that the preservation of the country’s cultural heritage will not remain a priority, due in part to the 2018 election of Jair Bolsonaro, a far-right populist. While campaigning, Bolsonaro expressed little support for the museum after the fire, telling AP: “It caught fire already. What do you want me to do?”

“Museums really are vitally important,” Dorfman said, citing the well-known warning attributed to philosopher George Santayana: “Those who cannot remember the past are condemned to repeat it.” Like the canary in the coal mine, Dorfman said discoveries made from the artefacts of natural history museums act as warning signs that point us towards a better future: “These collections must be viewed as windows into the past and tools for the future, and while they’re beautiful, that’s not their sole purpose.” Consequently, the destruction of the National Museum was not only a significant loss to Brazil’s heritage, but to the world’s as well. Brazilian historian Gunter Axt told The New Yorker the fire was one of the “greatest cultural disasters of our age”.

But in an open letter to the museum’s staff on behalf of ICOM NATHIST, Dorfman struck a note of optimism, saying the museum’s remaining objects represent a “strong foundation” from which to rebuild. “The world is facing a significant biological crisis and never has your collection, and your expertise, been more relevant to the global community,” he wrote. About a million artefacts survived the fire, and the museum still has its world-class staff, Dorfman said. He also told Business Destinations: “I hope what is left can be considered important enough to start that process of rebuilding and launch them into something, once again, really special.”

Good museums do not exist in a vacuum; they are integral fixtures in the communities and cultures in which they operate. At a time when cultural institutions are doing more than ever for the public – from education to community outreach – the importance of protecting their mission cannot be overstated. Governments and funders need to understand what museums and other cultural organisations do and the value they provide, Dorfman said. For that to happen, institutions must get better at telling their own stories.

As devastating as the fire at Brazil’s National Museum was, there is a lot to learn from the disaster. Most obvious is the fact that, by undervaluing museums and art institutions, we run the risk of losing millennia of cultural heritage to preventable destruction. However, the fire also demonstrated just how hard those who do understand the true value of museums will fight for a better future.