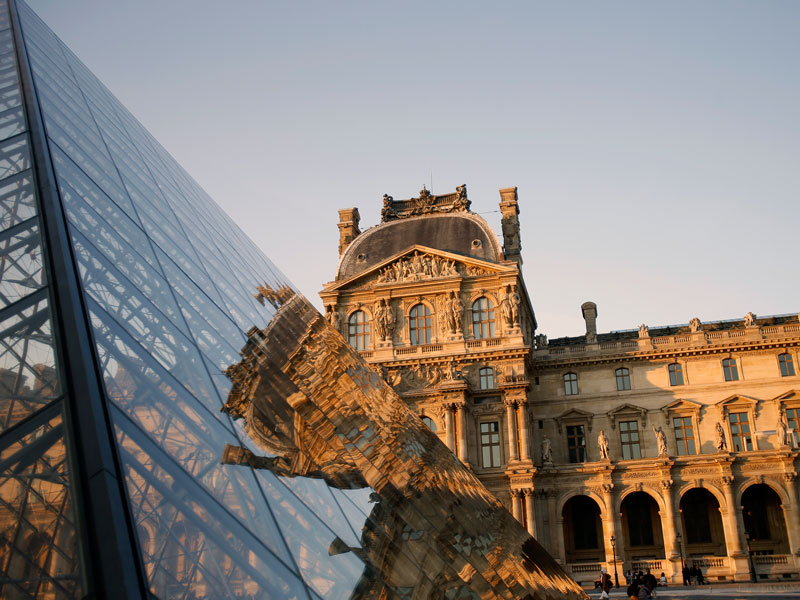 The Louvre Pyramid in the main courtyard of the Louvre Palace, Paris. The structure celebrated the 30th anniversary of its inauguration in March of this year

Europe has some of the most well-known and most visited galleries in the world, drawing in millions of visitors from across the globe each year. And while they house a plethora of priceless pieces, it’s not only the art itself that makes these spaces worth visiting; the architecture and history of the buildings add further appeal.

Galleries provide the perfect escape; for tourists and locals to relax, and as an educational platform for schoolchildren and students alike. As places of inspiration, the number of visitors continues to increase with each passing year.

Here, we list five of Europe’s most treasured galleries.

The Louvre, Paris
Located in the French capital, The Louvre is the biggest museum in the world. It was built in 1190 under the instruction of King Philippe Augustus, and first served as a defensive fortress for the city. By the 16thCentury, the building found a new purpose when it was reconstructed into a palace by Francis I. Another transformation then came in 1793 when it was established as the gallery we know today.

Today, the Louvre is associated with the iconic glass pyramid that sits in its courtyard. At night, the Pyramid is lit up, making it a beautiful place to take pictures. Inside, among numerous breathtaking pieces, visitors will find one of the most famous paintings ever created: The Mona Lisa, by Leonardo da Vinci. Other notable works include The Venus de Milo by Alexandros of Antioch, The Coronation of Napoleon by Jacques-Louis David and Théodore Géricault’s The Raft of Medusa. In 2018, the Louvre welcomed a record-breaking 10.2 million visitors, a whopping 25 increase from the previous year.

The Tate Modern, London
The Tate Modern is the most famous among a group of four Tate galleries spread around the UK. Designed by Pierre de Meuron, Giles Gilbert Scott and Jacques Herzog, the gallery was built in 2000, making it relatively young compared to others in the list. Located in Central London, it formerly served as Bankside Power Station, providing it with the modernist internal structure for which it is now known. Thanks to its considerable size, the building has abundant space for paintings and statues, as well as art installations and light projections.

Unsurprisingly, given its name, the gallery is mostly comprised of modern art, such as Marilyn Diptych by Andy Warhol, Mountain Lake by Salvador Dalí and Raoul Hausmann’s The Art Critic. Although mostly modern, there is a wide range of styles and artistic movements on display.

The Tate Modern receives around five million guests each year and is free to visit, though donations are gratefully accepted. It often puts on popular exhibitions, such as the first major exhibition of Pierre Bonnard’s work to be seen in the UK for two decades.

Rijksmuseum, Amsterdam
Set in the centre of Amsterdam, Rijksmuseum is filled with an array of Dutch art and historical artefacts – ranging from the Middle Ages to today. The national gem was first built in The Hague in 1800 before being moved to the Dutch capital in 1809. The museum’s expansive style is thanks to renowned architect Pierre Cuypers, who is also responsible for Amsterdam’s historic Central Station. In fact, Cuypers is credited for redesigning the city; the Rijksmuseum’s arch, for instance, acts as a gateway to the western, greener part of the city.

Among the treasures inside are The Milkmaid by Johannes Vermeer and Rembrandt’s magnum opus, The Night Watch. It also has many famous sculptures, such as Triton Blowing a Conch Shell by Adriaen de Vries and Artus Quellinus’ The Judgement of Junius Brutus.

Groeningemuseum, Bruges
The Groeningemuseum was designed by Joseph Viérin in 1930, making it one of the oldest museums in Belgium. Today it houses an impressive collection that spans six centuries of Flemish and Belgian artwork. Its highlights include pieces by Belgium’s Renaissance and Baroque masters, together with masterpieces in Flemish Expressionism and important milestones in the country’s modernism period.

Famous works include The Virgin and Child with Canon van der Paele by Jan van Eyck, Death of the Virgin by Hugo van der Goes and René Magritte’s L’Attentat.

Though relatively small inside, the gallery is known for its spectacular exhibitions. At this time, guests can enjoy De Sleutel Tot Alle Kunsten (the Key to all Arts), which is set to finish on August 18.

Van Gogh Museum, Amsterdam
The Van Gogh museum in Amsterdam houses the world’s largest collection of work by the iconic Dutch artist. With over 4,000 pieces on show, the collection includes some of his most famous paintings, alongside drawings and letters, as well as pieces painted by those who knew him. Among Van Gogh’s most famous paintings on display are Almond Blossom, Sunflowers and the much-loved Starry Night. With around 2.1 million visitors each year, the Van Gogh Museum is the most visited museum in the Netherlands and one of Amsterdam’s most popular attractions.

The museum itself is an impressive structure, split down the middle; half is constructed out of concrete, with the other made from glass. Designed by Gerrit Rietveld and Kisho Kurokawa, it first opened its doors in 1973, though its impressive glass entrance is a recent addition, having been completed in 2015. To celebrate the new entrance opening, 125,000 sunflowers were planted, forming an impressive labyrinth that covered almost half of Amsterdam’s Museum Square.