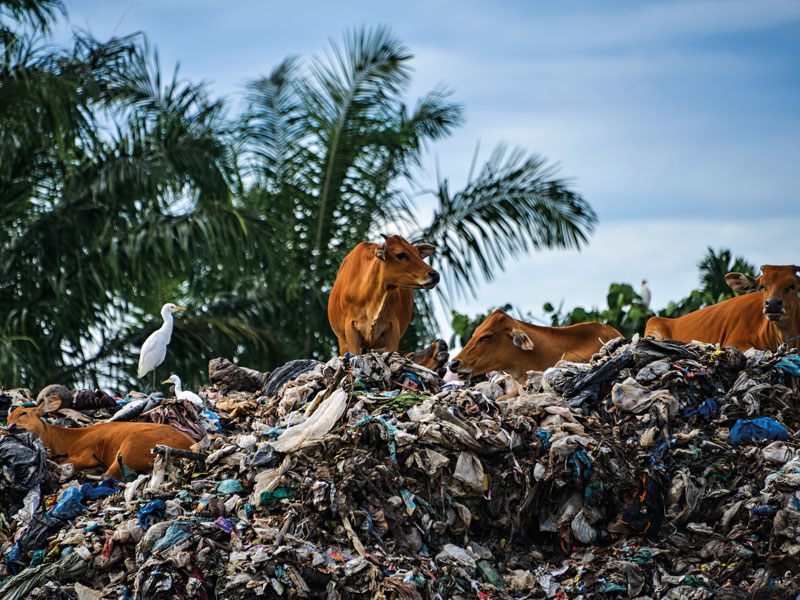 In February 2018, the national government in Beijing decided to prohibit the import of 24 types of waste as part of its National Sword policy

In the West, recycling has gone from a niche activity to a mainstream concern, with recycling stations emerging on streets, in workplaces and in homes. Still, few people consider what happens to waste once it’s been dropped in the bin – usually, its journey is just beginning.

Until last year, much of the rubbish produced in the developed world was shipped to China to be recycled cheaply and turned into new goods. Then, in February 2018, the national government in Beijing decided to prohibit the import of 24 types of waste (a figure that has since increased) as part of its National Sword policy. Some reports have suggested the importation of all recyclable materials could be outlawed by 2020.

Creating a circular economy that produces less waste requires a global system, not separate national ones

But as China’s doors closed, others opened. Data analysed by the Financial Times indicates that imports of plastic waste across the first six months of 2018 rose by 56 percent year-on-year in Indonesia, doubled in Vietnam and surged by 1,370 percent in Thailand. Malaysia, meanwhile, overtook China as the number one destination for the West’s carrier bags and throwaway packaging.

Now, it appears that South-East Asia no longer wants to be the planet’s dumping ground. The change of heart is understandable – the region has its own waste problems to deal with – but the decision is not necessarily in the planet’s best interests.

Bin there, done that
It is difficult to overstate just how much of a destabilising effect China’s National Sword policy has had on the global recycling ecosystem. According to National Geographic, the Asian country imported 45 percent of the world’s plastic waste between 1992 and 2018. If Hong Kong is included, this figure rises to 70 percent.

“The impact of the [National Sword] policy has been profound,” Adam Minter, author of Secondhand: Travels in the New Global Garage Sale, told Business Destinations. “Prior to the Chinese restrictions on imported recyclables, roughly one third of the recycling generated in the US, Europe, Japan and Australia was exported to China. Though the export restrictions are not bans (as they are typically depicted), they’ve severely restricted the potential destinations for developed-world recycling. As a result, significant volumes of plastic and paper are now headed to landfill and incinerators.”

A study conducted by the University of Georgia has estimated that the National Sword policy could displace 111 million tonnes of plastic waste by 2030. Where it will end up instead must be decided with both haste and care.

For a while, it seemed as if South-East Asia would be the new destination of choice, but the region has already started to push back: Thailand is no longer accepting discarded electronic materials from other markets; Vietnam has stopped issuing new waste-import licences, with a view to rejecting all foreign plastic by 2025; the Philippines sent approximately 1,500 tonnes of rubbish, falsely labelled as ‘recyclables’, back to Canada earlier this year; and in May, Malaysia’s Minister of Energy, Science, Technology, Environment and Climate Change, Yeo Bee Yin, railed against foreign states using her country as a dumping ground. “We will fight back,” Yeo said. “Even though we are a small country, we can’t be bullied by developed countries.”

But this defiance has come a little too late. Nearly a third of the waste sent to the Philippines from Canada could not be returned as it had already made its way into landfill. In Thailand, where trash imports have risen more than anywhere else, local health problems are a mounting concern, with reports emerging in Chachoengsao – the province to the east of Bangkok – that the water in its wells has become undrinkable after a rapid expansion of local recycling facilities. According to the country’s Pollution Control Department (PCD), plastic waste in Thailand is increasing at a rate
of 12 percent per year.

Cleaning house
The countries of South-East Asia may have – initially, at least – been willing to fill the China-shaped hole in the global recycling system, but it was immediately obvious that such a decision was short-sighted. Evidently, many of these states were already struggling to manage the volume of waste they produced domestically.

“The intense focus on imported recyclables has diverted attention from the fact that the South-East Asian region generates far more waste than the recyclables it imports,” Minter said. “There’s no comparison, really. And outside of Singapore, there’s no South-East Asian country that has a modern, environmentally sound waste management system. If countries could take care of their own waste management issues, the imported issues would fade to the background.”

Evidence of poorly managed waste is easy to find throughout South-East Asia. Indonesia’s Citarum River, for instance, is often recognised as being the most polluted in the world – in 2018, environmental activist Deni Riswandani told Reuters that 280 tonnes of chemical waste is dumped into the river each day. A 2014 study by Thailand’s PCD, meanwhile, found that just 466 of the country’s 2,490 waste management sites were properly managed. In 2017, Global Recycling magazine reported that more than 30 percent of Malaysia’s potentially recyclable material ends up in landfill. It’s easy to blame China’s National Sword policy for these issues, but South-East Asia’s waste management problems clearly have deeper roots.

Nevertheless, taking in more waste has created additional difficulties. The initial plan was to turn imported trash into raw materials that could then be sold to manufacturers at home and abroad for profit. In practice, though, recycling the West’s garbage has turned out to be a little more complicated: often, the waste that turns up on the shores of South-East Asia marked as recyclable turns out to be anything but.

Informal recycling plants have cropped up across South-East Asia in the wake of China’s ban, with unscrupulous operators keen to turn any usable waste into pellets that can be manufactured into new plastic products. But the processes used by these unlicensed plants often have harmful effects on the local environment, while any waste that can’t be utilised is simply buried or burned.

The growing trash problem has also proved damaging for tourism, an industry the region relies upon heavily for income. Last year, the Philippines was forced to close Boracay – an island that usually attracts two million visitors each year – for six months in order to clean up huge quantities of rubbish. The Tourism Authority of Thailand has also launched its own initiative to reduce plastic waste. The natural wonders found in this part of the world are a major draw for tourists; for local economies, it’s important that this remains the case for years to come.

Full circle
South-East Asia’s recent refusal to take the West’s rubbish has not been welcomed by all, especially those legitimate recycling firms that have lost access to an important resource. There’s also a view that the decision has economic and environmental drawbacks for all parties concerned.

On the surface, limiting the global trade of recyclable material may seem like a good way of encouraging developed nations to deal with their own waste. In practice, if recycling an object costs more than simply dumping it underground, businesses and governments are likely to choose the latter. What’s more, manufacturing firms that have a need for recyclables are often based in the developing world. Creating a circular economy that produces less waste requires a global system, not separate national ones.

As Minter told Business Destinations: “The key lies in investing in local recycling and waste management infrastructure.” If larger economies want South-East Asian nations to take their rubbish, they could provide financial and technical support to ensure that domestic waste management sites are up to scratch. And, of course, individuals have a role to play, too: if you are genuinely troubled by the current state of global recycling, the best thing to do is simply consume less.