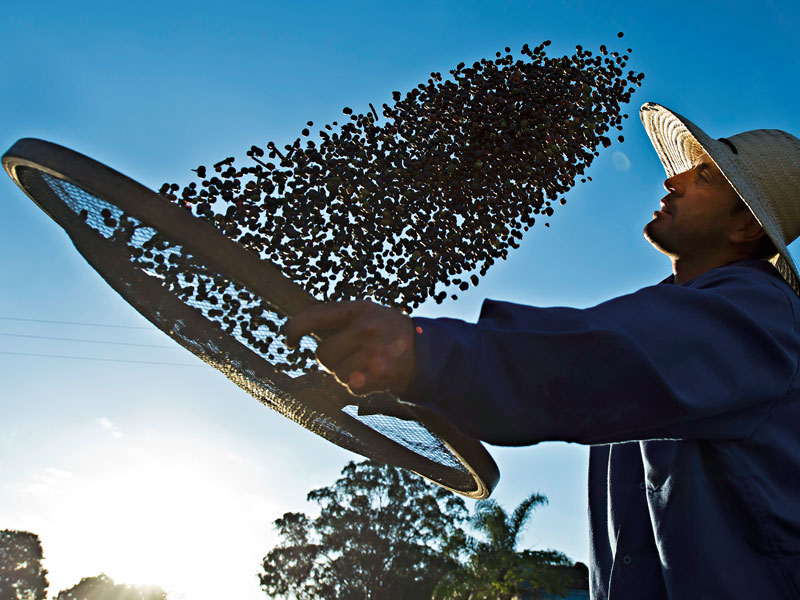 Life is not easy for the typical coffee farmer in South America. On a harvest day, work begins at around 6am and finishes more than 12 hours later. It’s always been difficult work, but lately it seems to have become a lot harder. In May, global coffee prices hit a 15-year low of just $0.87 per pound. Oversupply from Brazil is partly to blame, but so too is short selling by bearish speculators.

While farmers are struggling to keep their heads above water, global coffee brands are doing better than ever

The slump in prices – a downward trend that has been evident since late 2015 – has forced many farmers to give up coffee growing for more stable sources of income. Their cause has not been helped by the spread of coffee rust, a fungus that results in significantly reduced yields. In fact, according to NPR, some South American farms have witnessed a 50-to-80-percent loss of production over the past seven years as a result of the disease.

For many, though, such difficulties are very much out of sight, out of mind: while farmers are struggling to keep their heads above water, global coffee brands are doing better than ever, opening shop after shop to cater to our growing thirst for espressos, lattes and flat whites.

Leaving a bitter taste
Demand for coffee may be high, but it has been consistently outpaced by supply. In Brazil, which grows more coffee than anywhere else in the world, 2018 witnessed a record yield of 62 million 60kg bags. This certainly weighed heavily on prices, but not enough to damage domestic farms: as the world’s principal producers of the commodity, Brazilian coffee farms often operate on a much larger scale than those in other South American markets, while mechanised harvesting enables them to keep costs to a minimum. In other words, Brazilian coffee farms can withstand price pressures more effectively than most.

Number of 60kg bags of coffee produced by Brazil in 2018

Proportion of Colombian coffee farmers whose only livelihood is coffee production

The poor performance of the Brazilian real has also helped matters – the currency depreciated heavily against the US dollar throughout 2018, almost surpassing its record high of 4.248 in September. This allowed Brazilian farmers to boost profits by exporting their beans, and has meant growers can achieve profitability even when selling their coffee for as little as $0.90 per pound.

Disgruntled farmers based in other parts of South America shouldn’t be too resentful of their Brazilian neighbours, though: the nation’s smaller producers are starting to feel the pinch, and blame for the recent price drop lies elsewhere. Financial speculation, for example, has contributed greatly to the commodity’s devaluation, with investors holding huge short positions in expectation of a record harvest.

“The reason for low coffee prices is not simply because supply exceeds demand,” a spokesperson for the National Federation of Coffee Growers of Colombia (FCN) told Business Destinations. “It is also because coffee, as a commodity, is subject to huge speculation in futures trading in New York, where actors external to the coffee industry take part and are indifferent to producers’ livelihoods and sustainability.”

The bearish outlook adopted by speculators hasn’t caused the downturn in the coffee market, but it has certainly exacerbated it. It is difficult to know when this short-selling cycle will be broken – for now, though, it seems coffee prices may not have hit rock bottom just yet.

Cash crops
The difficulties facing coffee farmers in South America have wider ramifications, too. For many years, coffee farming was championed by national governments as a financially viable alternative to producing coca leaves – the primary ingredient in cocaine. In fact, alongside cocoa, coffee production helped to reduce the amount of land used for coca in Peru’s Huallaga Valley by 90 percent between 2009 and 2016. The recent coffee price slump threatens to reverse this trend.

In 2017, a year that saw coffee prices hit a low of $1.16 per pound, potential cocaine production in Peru increased by 20 percent to reach a 25-year high of 491 tonnes. The risks are significant – the illegal drug trade can bring violence and other forms of crime along with it – but so too are the rewards. According to InSight Crime, a non-profit journalism organisation that investigates organised crime in Latin America and the Caribbean, Peruvian farmers can earn around two and a half times as much by growing coca leaves than they can from coffee beans.

That’s not to say all coffee growers are entering the drug trade. Some are switching from arabica beans (the premium, milder variety of the coffee plant) to robusta beans (the caffeine-rich, bitter variety that makes up the majority of instant coffee and espresso blends). Importantly, the distinction between these two closely related plant species extends beyond taste: when compared with arabica crops, robusta produces higher yields, is cheaper to grow and generally displays better resistance to fungal infections. Despite these benefits, many of the coffee industry’s prominent players fear that making the switch to robusta could cause long-term damage to any given country’s reputation as a producer of premium brews. For this reason, Colombia has generally discouraged robusta farming, while Costa Rica only recently lifted a 30-year ban on cultivating the crop.

In an ideal world, coffee farmers would continue producing the artisan coffee that their respective countries have become known for. When a choice between putting food on the table and growing a less prestigious strain of coffee arises, though, it is an easy decision to make. “The impact of low prices is different for small-scale producers of speciality coffee compared to larger farms,” the FCN spokesperson explained. “Approximately 96 percent of coffee farmers in Colombia are smallholders and their only livelihood is coffee production. Medium-sized and large producers can, at least, grow other agricultural products to assure food self-sufficiency.”

If these smaller coffee farms are forced out of business or decide to change crops, something will undoubtedly be lost. Coffee is entwined with South America’s culture – a culture that stems from real people putting their hard work and passion into the beans they grow. It’s something that can be mimicked by large-scale, mechanised farms, but not convincingly reproduced.

A storm in a coffee cup
After the difficulties of the 2018/19 financial year, coffee farmers are understandably hopeful that the next 12 months will bring some relief. Such optimism is not completely misguided: coffee trees have a biennial bearing cycle, whereby a heavy yield, or ‘on year’, is followed by a lighter one.

Brazil, the country that has more of an impact on global prices than any other, is currently experiencing an off year that should help ease oversupply – in theory, at least. In reality, government forecasts predict the country’s coffee output will total somewhere between 50 million and 55 million 60kg bags by year-end. This would represent a decline compared with 2018’s harvest, but would still beat every other year on record.

If supply continues to show few signs of letting up, coffee farmers across South America will need to look for other ways of staying afloat. Consumers can help with this: making responsible choices in coffee shops and supermarkets will ensure farmers receive a fair price for their beans. Fortunately, major brands such as Nespresso and Starbucks have started to appreciate how short-sighted their business-as-usual approach has been and are now taking sustainability more seriously.

Tourism could provide further support. Last year, the local government in Risaralda, Colombia’s main coffee-growing region, invested $6.9m in several programmes that aim to boost tourism. In Brazil’s Vale do Café, meanwhile, historic farms that had previously only been open to tourists are about to resume production. “Many farmers have learned to complement their income through tourism on their own coffee farms – an activity of great help, especially in times of low prices,” according to FCN’s spokesperson.

How long the current period of low prices will last is difficult to say. Brazil’s off year will provide temporary respite, but volatility is an unavoidable part of commodity trading. Critically, alternative revenue streams and Fairtrade practices must be adopted more widely. That way, independent coffee growers can continue to produce their crops for years to come and coffee drinkers around the world can enjoy their morning cup with a clear conscience.