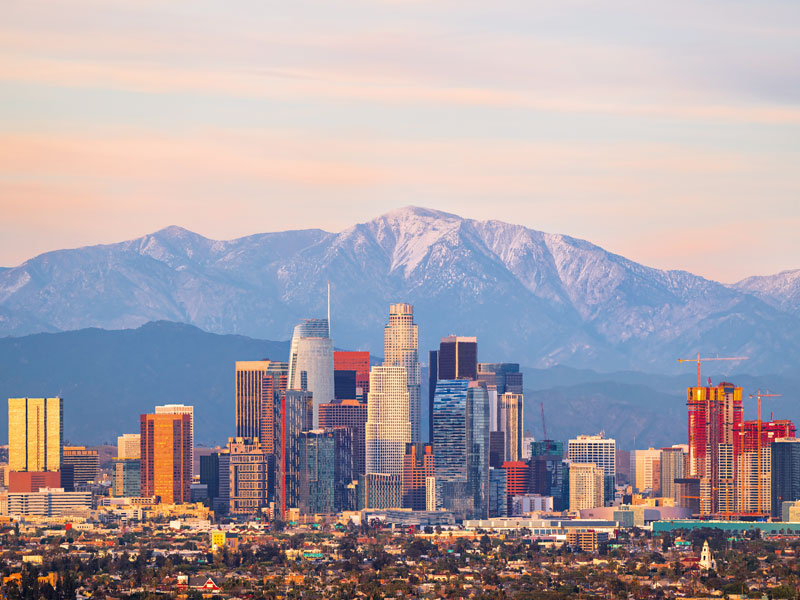 Home to a remarkably diverse community of people, Los Angeles attracts visitors from across the globe. Business travellers have identified the city as a vibrant location for corporate events

Diversity and inclusivity have always been bedrocks of Los Angeles culture: people from 140 countries, speaking more than 224 languages, currently call the city home. LA has always rolled out the red carpet for visitors from across the globe. In fact, diversity is one of its defining features and has long attracted people to experience the LA lifestyle.

Angelenos truly embrace the heterogeneity that makes LA a tapestry of different cultures, ethnicities and ideas – a mindset that is reflected in its arts scene. More creatively and culturally vibrant than ever before, the city’s arts scene celebrates inclusion and offers something for every taste and interest.

Hub of entertainment
LA’s mosaic of cultures is magnified by its culinary landscape, producing an incredible breadth of authentic worldly cuisines, including Mexican, Korean, Chinese, Middle Eastern, Japanese and Thai. With a culinary scene defined by LA’s many immigrant communities, a new generation of chefs is making its mark on the city. These chefs are not only drawing inspiration from their heritage, but are using diverse flavours and techniques to create cross-cultural mash-ups.

A hub of gastronomic freethinking and creativity, LA is home to world-renowned tastemakers who push the boundaries of experimentation and reinvention. With access to top-quality ingredients and sun-kissed produce all year round, chefs from across the globe are moving to LA to immerse themselves in the city’s evolving food scene.

It’s not just food that has come to define the LA experience; Hollywood is known as the heart of the entertainment world. Over the years, Hollywood has held many identities, from the Golden Age of the first half of the 20th century to its current iteration as a must-see tourist destination. A wave of development and renovation is now bringing new life to the area. Scores of high-end hotels have debuted in the heart of Hollywood of late, including the Kimpton Everly, Dream Hollywood (the first Dream hotel on the West Coast) and Mama Shelter (the first in the US). And there are more on the way, including the Thompson Hollywood Hotel and Godfrey Hotel Hollywood – both due to open this year – and Tommie Hotel, which we can expect in 2020.

In December 2018, the city voted to officially move forward with the transformation of the Los Angeles Convention Centre and areas within the adjoining LA LIVE campus to create a dynamic, unified and modern meetings venue that is unrivalled on the West Coast. The project will expand and modernise the convention centre and LA LIVE into a fully integrated, 43,560sq ft meetings destination with more than two million square feet of event space, 2,240 onsite hotel rooms, 20 restaurants and numerous unique venues. It includes an expansion of the JW Marriott Hotel with a new 40-storey, 850-room hotel tower, promising 110,000sq ft of meeting space, including a 51,000sq ft ballroom, which will be the largest in the city.

This development will redefine LA’s MICE experience, creating approximately 750,000sq ft of contiguous space by connecting the convention centre’s south and west halls and enhancing its integration with LA LIVE. The design phase of the project is currently underway. It’s a collaborative effort that involves appliance manufacturer AEG, architecture firm Populous and meeting planners from the Los Angeles Tourism Customer Advisory Board. The projected timeline for completion is early 2022, prior to the Super Bowl, which will be hosted in this dynamic destination.

Combined with legendary sights that can only be found in Hollywood, including the Walk of Fame, Dolby Theatre (home of the Academy Awards) and the iconic Hollywood Sign, you can find LA’s signature glamour everywhere in the entertainment capital of the world.

Further afield
If you haven’t been to Downtown LA recently, you might not recognise it. It has undergone a renaissance that has elevated the district to become one of the most dynamic meetings destinations in the country. This rapid development has sparked a surge of new hotel openings, with premier brands including InterContinental, Hotel Indigo, Freehand and NoMad flocking to the area.

Downtown LA has long supported its local artists, and it is this, in combination with its thriving nightlife and rapidly growing public transport system, that makes it the premier destination to connect individually and innovate collectively. The region’s revitalisation has created a walkable urban centre with a burgeoning residential community. Offering beautiful parks, independent art galleries and many performance spaces, Downtown LA has become a flourishing community where both residents and visitors seek inspiration.

Those looking to see even more of LA’s many neighbourhoods should venture out of Downtown and Hollywood and explore the surrounding areas, such as Universal City, home of the world’s only working movie studio and theme park, Universal Studios Hollywood. In the San Fernando Valley, visitors will find the historic Air Force One at the Ronald Reagan Presidential Library, and can enjoy a VIP studio tour at Warner Bros Studios.

The Westside is LA at its most upscale and glamorous. What’s more, it offers proximity to major medical, entertainment and government hubs. Many of LA’s most luxurious hotels can be found here, and it boasts a variety of venues that will suit almost any group’s needs or budget. Event planners can make use of the area’s world-class exhibits at the Getty Centre or explore Wilshire Boulevard’s Museum Row, which features the Los Angeles County Museum of Art – the largest art museum in the Western US. There’s also the newly renovated Petersen Automotive Museum, one of the country’s finest automobile institutions.

Star of the show
LA is one of the most accommodating cities in the world, boasting more than 103,000 hotel rooms across 1,030 properties, with options at every price point. LA’s hospitality industry is incredibly welcoming and committed to providing a stress-free experience to all of its guests. Helping to make this possible is LA’s convenient public transport system: the city offers a robust metro rail network, allowing visitors to get across the city and explore all of its unique neighbourhoods with ease and at a minimal cost. Continued development of the transit system will further connect LA’s distinct regions in the coming years, such as the extension of the Purple Line, which, when it opens in 2026, will take riders from Downtown all the way to the Westside.

Furthermore, an automated people mover at Los Angeles International Airport will soon provide free, reliable access to all terminals. It will also link to a new metro light rail station so delegates can ride from the airport to their event in Downtown or Hollywood, skipping any congestion on the way. When delegates are not in meetings, they can enjoy the year-round, near-perfect weather and varied landscape that enables LA to offer every sport and outdoor activity imaginable. The city offers a range of options stretching from snow-capped mountains to the sandy beaches of the Pacific Ocean.

LA’s 75 miles of idyllic coastline offers a variety of recreational possibilities including surfing, swimming, beach volleyball, biking, paddleboarding and skating. Adventure-seekers can explore LA’s mountaintops through countless trails for hiking, along with a wealth of other activities, including horseback riding, mountain biking and camping. Hiking is a quintessential LA activity, and getting acquainted with the city’s endless trails is the perfect way to discover why LA is the ideal place to get outside. With easy, intermediate and difficult options, the trails of the Beach Cities all offer a unique perspective of the area. With so much on offer, it’s no wonder that LA is becoming a star of the MICE industry.