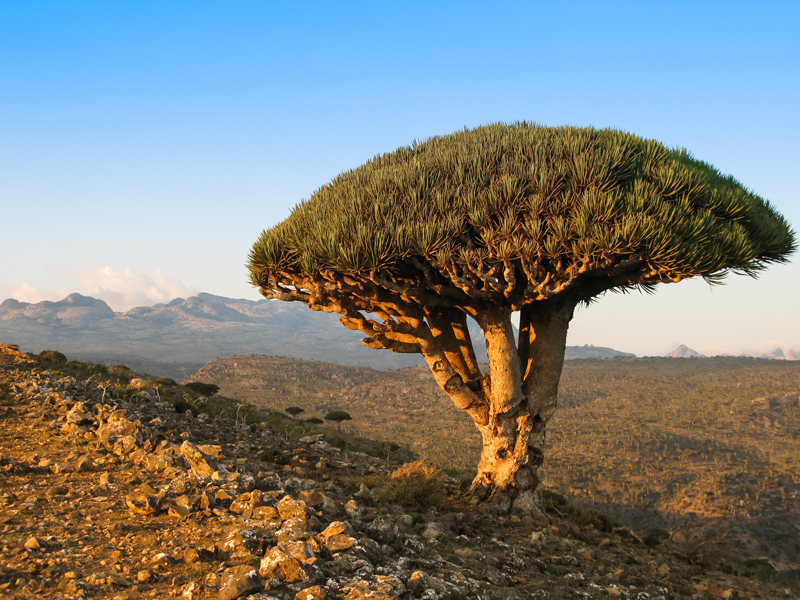 Socotra is home to the dragon's blood tree, said to bring magical and medicinal benefits to those who drink its red sap

Socotra is geographically, politically and biologically ‘other’. The island archipelago is the only transcontinental territory in the Middle East – it is situated 240km east of the coast of Somalia, making it physically part of Africa, yet it has been governed by Yemen since its unification in 1990, even though the Yemeni mainland is more than 550km away. Socotra is also renowned for its biodiversity: it is home to more than 700 endemic species of flora and fauna, including the inimitable dragon’s blood tree, the deep red sap of which is believed to have magical and medicinal properties. It’s little wonder the island has been nicknamed the ‘Galapagos of the Indian Ocean,’ along with being designated as a UNESCO World Heritage Site in 2008.

The island’s remote location has helped to preserve its unique ecological profile and shield it from much of the destruction of the Yemeni Civil War. This brutal conflict between government forces  led by Yemeni President Abdrabbuh Mansur Hadi and supported by the UAE and Saudi Arabia – and Iranian-backed rebel group the Houthis has been raging since 2015. Almost 100,000 people have been killed, according to the Armed Conflict and Location Event Data Project (ACLED), and millions more are at risk of starvation, as famine has devastated the Middle Eastern nation.

“[Socotra’s] seclusion has certainly been a blessing in disguise,” Rufus Caldecott, an operations analyst at Blackstone Consultancy, told Business Destinations. Since 2018, however, UAE forces have begun to make significant inroads on the island, plying residents with funding for infrastructure and promises of free healthcare in order to make the construction of a military base more palatable. Not only have the UAE’s actions been met with ferocious protest from some of Socotra’s residents, but they risk further damaging what are already extremely fragile relations in the Middle East.

Postcode envy
The UAE’s interest in Socotra derives both from the island’s geographical position and touristic appeal. Socotra is located in the mouth of the Gulf of Aden, one of the most crucial shipping routes in the world, as any cargo vessel carrying goods between Europe and Asia must travel through this narrow sea passage. “With the occupation of Socotra, the UAE would not only be able to control this shipping route, but it would also have a secure base to bolster its military hegemony in the area,” explained Caldecott.

Moreover, the island’s unique environmental profile makes it a highly attractive destination for tourists. Prior to the civil war, the island operated an ecotourism model, granting a small number of visas per year, particularly to scientists studying Socotra’s ecological system. However, the UAE is reportedly hoping to exploit this international interest by building luxury resorts, a strategy it has found huge financial success with before, such as with the construction of artificial archipelagos such as the Palm Jumeirah and World Islands, both of which have helped to establish the country as a top destination for high-net-worth travellers. It seems the UAE is seeking to replicate this on Socotra: according to Abduljameel Mohammed, the deputy governor for environment and development in Socotra, Emirati firms have already begun digging up parts of the island’s national park in preparation for a number of five-star resorts.

Construction of this nature is not only politically incendiary, given that the UAE has allegedly not obtained permission from the central Yemeni Government to begin these projects, but it also threatens Socotra’s precious biodiversity. “The dangers posed to this sensitive ecosystem are huge,” said Caldecott. “The possibility of the UAE using the island as a new holiday destination for their nationals raises the prospect of increased pollution, an increase in high-rise hotel blocks and a loss of the unspoilt nature of the island.” Reports have also emerged of protected species being taken from the island, transported back to the UAE and rehoused, which is not only a violation of Socotra’s sovereignty, but also a brazen theft from its people.

Disrupting harmony
Amid the controversy, some have recognised that the UAE’s infiltration of Socotra has improved standards of living at a time when the island was receiving little aid from the Yemeni mainland. UAE-led humanitarian organisations have been active on the island since 2000, notably in the aftermath of two powerful cyclones in 2015, which severely damaged Socotra’s power grid. However, recent UAE activities have overstepped the appropriate duties of aid providers; these have included flying islanders over to Abu Dhabi to receive medical treatment and supplying them with work permits. “This has in some ways softened the growing military activity on the island, which estimates suggest itself has created approximately 5,000 jobs,” noted Caldecott.

But these benefits have not pacified all Socotran residents in the way the UAE might have hoped. Rather, the majority of islanders have recognised the Emirati presence as an unwarranted and illegitimate one that has led to a series of violent clashes. In June this year, at least 12 people were injured in a conflict between Yemen’s coast guard and UAE forces when the latter attempted to take control of the island’s seaport. The following month saw the largest demonstration in the island’s history, according to Yemeni activist Atef Al-Sokotri, as residents took to the streets to protest the UAE’s continued presence.

The pro and anti-UAE factions that the country’s presence has created are threatening to destroy Socotra’s historically harmonious social climate. “Having previously been isolated from volatile regional wars and political instability, the islanders are being forced to choose loyalties between Yemen or the UAE,” said Caldecott. “It is widely feared that these tensions will eventually escalate, creating the potential for civil unrest and violence amongst the islanders.”

Global reverberations
Along with disrupting the ecological and social status quo on the island, the UAE’s activities risk compounding existing conflicts, both regionally and on a global level. With regards to activities on the Yemeni mainland, the UAE is allied with Saudi Arabia, as both share a common goal in seeking to defeat the Houthi rebel group and quell the spread of Iranian influence in the Middle East. Until now, Saudi Arabia has turned a blind eye to the UAE’s activities in Socotra, but this could change at any moment.

“I don’t think it’s in Saudi Arabia’s interest to challenge the UAE’s hegemony in Socotra just yet, but I have no doubt they’ll want to once they’ve eliminated the Houthi threat,” said Caldecott. If challenged, the UAE would likely find it extremely difficult to maintain its grip on Socotra, given that Saudi Arabia’s military arsenal is infinitely larger. Moreover, Socotra could be destroyed in the struggle.

There’s also the question of whether, and how, the UAE intends to legitimise its presence on the island, as the very act of doing so could shake the foundations of its relations with hundreds of other nations. “I don’t see the UAE officially annexing Socotra – in modern geopolitics, that doesn’t really happen anymore,” said Caldecott.

By unofficially exerting its control, the UAE is able to maintain some semblance of plausible deniability. While this allows it to evade conflict, it also relegates the Socotran people to being pawns in a political game, the eventual outcome of which could prove disastrous for their way of life and the island they call home.