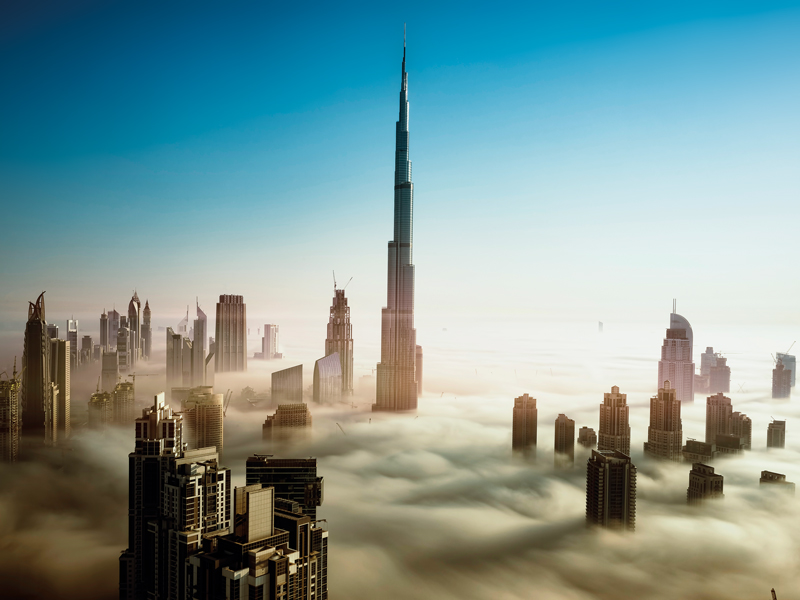 Since 2000, the number of skyscrapers built around the world has exploded, rising 464 percent. As of 2018, there were 1,478 buildings standing at 200m or higher, according to data from the Council on Tall Buildings and Urban Habitat (CTBUH).

Skyscraper construction is not evenly distributed across the Middle East, nor does it correlate with population growth

Although it was the US that started this trend of building skywards, Asia and the Middle East have resoundingly taken the lead when it comes to the construction of the most imposing buildings. In fact, all five of the world’s tallest skyscrapers are located in these two regions, with just three structures in the US breaking up their dominance of the top 20.

Dubai, one of seven emirates that make up the UAE, is home to the greatest number of towers above 300m of any city in the world. With 22 of these looming skyscrapers, Dubai has built double the number of its nearest rival, Shenzhen, China, and is also home to the world’s tallest building: the 828m Burj Khalifa.

Growing up
Dubai’s skyline has completely transformed since the 321m-tall Burj al Arab tower was completed in December 1999. Nearby nations such as Saudi Arabia, Qatar and Kuwait have shown an equally large appetite for building skywards in the past two decades, with the former’s Jeddah Tower slated to become the world’s tallest building when construction is completed in 2021. The tower will reportedly stand at 1,008m.

But while the region averaged 27 skyscraper constructions per year between 2008 and 2018, in reality, growth has been more sporadic. “The Middle East has actually had some ups and downs – it’s not a constant upward trend”,  Daniel Safarik, Editor at the CTBUH, told Business Destinations. In 2008, for example, 37 skyscrapers of at least 150m were built, but two years later completions dropped to 25, according to CTBUH data. In 2015, there were just 16 completions.

The erratic growth pattern may be influenced by the fact that skyscraper construction is not evenly distributed across the region, nor does it correlate with population growth. “In places such as Qatar and the UAE, the construction [of skyscrapers] is largely driven by a desire to shift the economy away from fossil fuel exports and towards real estate and the role of each country as a global air hub connecting the majority of the world’s population”,  Safarik explained.

Saudi Arabia has also sought to develop a more sustainable economy, but Safarik suggested the country’s efforts have been “more nuanced, in that it is part of a modernisation campaign to make the country more friendly to foreign investment and tourism, as well as to create new lines of employment for its vast youth population.” For example, Saudi Crown Prince Mohammed bin Salman’s Saudi Vision 2030 plan, through which he aims to increase the country’s non-oil revenues, includes publicly listing the state-owned oil giant Saudi Aramco, restructuring the government’s Public Investment Fund and boosting renewable energy generation.

Head in the clouds
Dubai has made significant headway in diversifying its economy by moving away from oil and towards real estate, tourism, technology and financial services. Having once accounted for 50 percent of Dubai’s GDP, oil production now contributes less than one percent, according to Bloomberg data. The city is also home to one of the busiest international airports in the world and, thanks to the gleam of its new skyscrapers, has become a tourist magnet. According to Visit Dubai, 7.16 million international tourists visited the city in the first five months of 2019.

But while Dubai’s pivot away from oil has been successful, questions remain over the sustainability of its new economic model. In 2018, Dubai’s economy grew at its slowest pace since 2009, when the economy contracted thanks to a debt crisis sparked by a drop in property prices. It took a $20bn bailout from Abu Dhabi, the oil-rich capital of the UAE, to get Dubai back on its feet.

A decade later, and debt is still a problem in the emirate: according to a report published by the International Monetary Fund in 2019, Dubai’s government-related entities carry a combined debt of around 70 percent of GDP.  Furthermore, property prices have already dropped by around a quarter from their 2014 highs and, according to credit rating agency Standard & Poor’s, the market will not fare any better this year due to an excess of supply. Regardless, Dubai is moving ahead with the construction of its Dubai Creek Tower, a new skyscraper that, if completed, is set to be taller than the Burj Khalifa, and possibly even the Jeddah Tower.

The data for buildings currently under construction, however, suggests the region may still be losing steam. According to the CTBUH, there are currently 78 buildings that are 150m or taller under construction across the Middle East, while another 36 have been proposed. In 2019, 37 are scheduled for completion, followed by 16 in 2020 and a further 16 in 2021. But in 2022, just one skyscraper is expected to be finalised. “Compare this to past years’ completion results and you get some idea of where things are going”, Safarik said.

A tall order
As the CTBUH found, skyscrapers are not only built for practical purposes in the Middle East: in some cases, they act more like large neon signs celebrating the wealth and power of a country on the world stage.

Although skyscrapers have an element of bravado regardless of where they are built, Carl Knutsen, a professor of political science at the University of Oslo, has delved deeper into the role a country’s government system plays in their construction. In a working paper entitled Autocrats and Skyscrapers: Modern White Elephants in Dictatorships, Knutsen and his colleague Haakon Gjerløw found that skyscraper construction increases when countries become more autocratic. “In autocracies, you have leaders that are better able to spend money in ways that they personally prefer without taking into account the preference of the citizens”, Knutsen told Business Destinations.

One indicator Knutsen and Gjerløw used to determine this was the size of ornamental embellishments that serve no real purpose – otherwise known as ‘vanity height’. This uninhabitable space was systematically more common in skyscrapers built under autocratic regimes. Around 244m – or nearly a third – of Dubaiís Burj Khalifa is unusable, for example. Uninhabitable space represented between 29 and 39 percent of four other skyscrapers in Dubai.

The research also found that the growth of skyscraper construction in more democratic societies followed the rise of income and urbanisation, while in autocratic regimes it occurred regardless of whether the country was rich or poor, urban or rural. This distinction is evident throughout the Middle East: while the UAE lays claim to more than 63 percent of the buildings standing at above 150m in the region, it’s home to just 2.3 percent of the population, according to CTBUH data. Iran, meanwhile, has almost 20 percent of the population and just one skyscraper. “There’s something about all of these different patterns pointing in the same direction, even if there’s no smoking-gun evidence that there’s a lot of waste associated with any particular skyscraper”, Knutsen said.

But skyscrapers are not always poor economic choices. Often, they help attract tourists and provide housing and jobs. Knutsen compared the dilemma of whether to build a skyscraper or not to that of hosting a mega-event like the Olympic Games: “Coming from Norway myself, I know we have this [discussion] approximately every eight years – whether or not to hold the Winter [Olympic Games] – and oftentimes it’s really, really hard to know.”

The key difference between democratic and autocratic societies is not that autocrats make a greater number of bad economic decisions, but that they make more decisions in general. As Knutsen explained: “It’s not necessarily that all of these projects are economically wasteful or inefficient, but there is a higher probability of [a project] being realised [in an autocratic society].”

It is difficult to anticipate the total economic impact of any particular skyscraper, but with the Middle East’s property bubble in danger of bursting, there may be trouble brewing for nations that rely on skyscraper construction for an economic boost. At the end of the day, these shining towers may be no more sustainable than the oil they were built to replace.