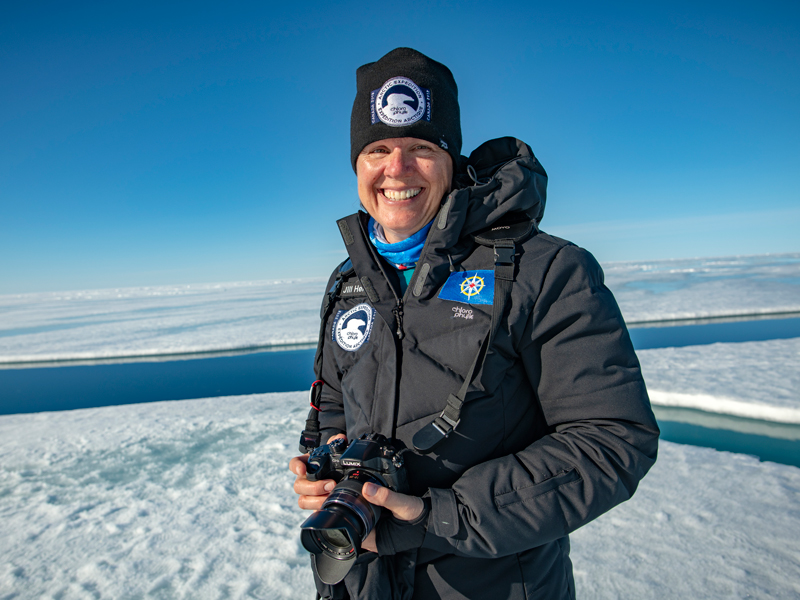 For many people, the idea of squeezing through a tiny crevice in an underwater cave system, with a mountain of rock above them and a limited supply of oxygen, is the stuff of nightmares. But for Jill Heinerth, this is all part of the day job.

Heinerth is one of the most celebrated cave divers in the world. Her passion has taken her to some of the least-visited and most poorly understood places on Earth; in 2001, she became the first person to dive under the icebergs of Antarctica. Heinerth’s occupation is as much about the pursuit of knowledge as it is about the physical challenge, and she often leads scientists on expeditions to uncover the secrets of these hidden worlds.

On a very spiritual level, I feel like I’m swimming through the veins of Mother Earth

Widely considered to be one of the most life-threatening activities in the world, becoming a cave diver is no easy feat. It requires nerves of steel and a sharp, pragmatic mind. Business Destinations spoke to Heinerth about what compels her to explore these mysterious formations, and how she keeps a cool head even when a dive spirals into a life-or-death situation.

How did your passion for cave diving begin?
As a young child, I used to watch Jacques Cousteau on TV. Both that and also the Apollo moon landing made me want to be an explorer, but especially Cousteau. Seeing this unbelievable underwater world completely inspired me to want to dive.

On top of that, I was definitely a water baby. I did all kinds of swimming classes and paddling classes and spent a lot of time in a canoe as a kid. But interestingly enough, one of my earliest memories is actually of a near-drowning incident. When I was just a toddler, I fell off a dock and was floating face down in the water when my mother reached down and grabbed me. Apparently I was laughing, but she was screaming. In a way, it all started because my mom was like: “OK, I need to give this kid swimming lessons.”

What are some of the most awe-inspiring places you’ve visited?
I’ve been so fortunate. I’ve been everywhere from inside the largest icebergs in recorded history to beneath the Sahara desert and under the Ural Mountains of Siberia. But I think probably the prettiest caves that I’ve seen are in Abaco in the Bahamas and in Bermuda. They’re absolutely stunning.

What drives you to explore these underwater caves?
I like being in these dark, intriguing places where nobody’s been before. On a very spiritual level, I feel like I’m swimming through the veins of Mother Earth – like I’m swimming inside the sustenance of the planet that services humanity and wildlife and the environment.

I also really enjoy collaborating with scientists. I have had some remarkable opportunities: I work with archaeologists studying the cultural remains of civilisations that have been left in caves; I work with biologists looking at the unique life forms that swim in the darkness there; and I work with engineers who are creating mapping technologies that we’re testing in caves and sending into outer space.

Cave diving – and exploration as a whole – has always been very male-dominated. Do you think this is changing?
I really was the only woman on the boat for so long. But there are definitely more women participating now in exploration and also in documenting these places through underwater photography and videography. Some of the most exciting artists in the underwater world these days are women, which is awesome.

So it’s definitely improving, but we’re still a really small piece of the community. In my relationship there’s a complete role reversal: my husband is home worrying while I’m off at work, and that’s not very traditional in any job.

What you do is obviously dangerous. How do you overcome fear?
The first thing I would say is that I am not fearless. In fact, I think fear is a really important part of helping me make very careful risk-assessment choices for everything that I do. I’ve lost many friends over the course of my career, who’ve died in diving accidents. Quite often it was because of the choices that they made before they got in the water.

So I don’t think of myself as risky. I think of myself as a problem solver who finds value in going to these very remote, undiscovered places, but is willing to put the time, effort, research and careful risk assessment into going there and bringing back the documentation of these places.

What life-threatening situations have you been in?
We all face terrifying dangers in our lives in many different ways. The reaction for anyone is the same. The first thing that happens is your heart rate goes through the roof. You start to breathe fast. For me, underwater, I’ve learned that when something unexpected happens and I feel my heart racing and my breathing speed up, the first thing I have to do is calm my mind and literally move the emotions aside.

The problems that happen underwater are usually very complex and so, in order to survive, I have to first get control of my breathing, conserve my resources and then very slowly solve one tiny problem at a time and work relentlessly towards success.

I have been in situations that I didn’t think I was going to come home from. I’ve been stuck in a cave behind a scientist who was panicking when our line was broken – no visibility, so no way to see. The line is broken and my buddy’s panicking and blocking my way out of the cave system. In that moment, my mind was racing, but I had to stay calm and just take the small steps towards survival.

What is the main thing you’ve learned from cave diving?
The lesson I’ve learned personally is that nothing is impossible. Even the biggest problems in life are solvable and we’re capable of far more than the bounds of our imagination.

Why should we better educate ourselves about the deep sea?
I’m literally swimming through the drinking water conduit to the planet. And so my message to humanity would be that everything that we do on the surface of our Earth will be returned to us to drink. I hope that people will learn more about where their drinking water comes from, how they might be overusing it and how we can all protect it for future generations.

What does the future hold for you and your career?
Hopefully, I will continue to educate people about the most challenging environmental issues that we face today. I really think that that’s my most important role. To that end, I’ve got a book coming out this fall and also a movie. I think that creating these kinds of educational projects is really my destiny.