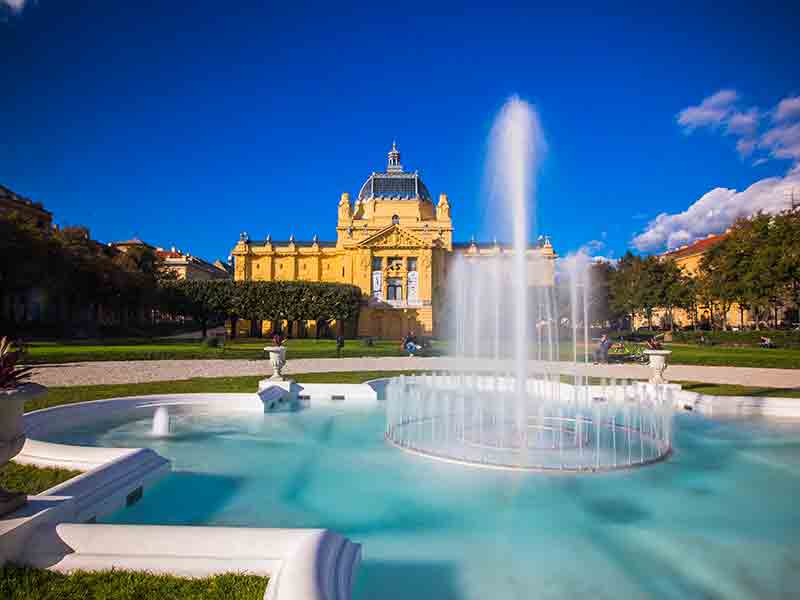 Zagreb is becoming one of Croatia's most popular destinations for MICE events. Photo © Ivo Biočina

Stretching along the Adriatic Sea, just a stone’s throw from Central Europe, Croatia boasts the perfect mix of vibrant energy you would expect from a young country with the friendly, relaxed and welcoming ways of traditional Mediterranean hospitality. From the pristine blue sea and the mystical mountains to spectacular national parks full of thriving wildlife, Croatia is brimming with stunning sights and exciting flavours. For years, Croatia has proven irresistible to those seeking diversity, vacation time and business opportunities, and can be enjoyed all year round.

In Croatia, it is not difficult to combine business with pleasure and achieve successful business cooperation. Surrounded by breathtaking natural beauty, endless coastlines, diverse gastronomy and adventure, sports and wellness, Croatia offers ideal conditions for MICE tourism. Year after year, Croatia has become an increasingly well-known European meetings destination on a global scale. The country is becoming especially attractive for meeting organisers, whether they are focused on conferences and congresses or after-work incentives.

Growing popularity
Serious investments in congressional capacities have elevated the quality of Croatia’s MICE offerings in recent years. With increasing capacity growth and spectacular results achieved every year at a national level, it is more than acceptable to say this tourism segment is booming in Croatia. This growth has been proven by research conducted by the specialised tourism portal Business Tourism, which noted that as many as 70 percent of Croatian hotels specialising in conference and incentive tourism expected the number of business meetings they host and revenues they bring in to grow considerably in the coming months and years.

The advantages of MICE tourism in Croatia include direct accessibility, an excellent road network and, of course, an impressive hotel offering, which includes a number of four and five-star resorts. Numerous investments, at an estimated total value of €800m ($893m), are planned for 2017 in the hotel sector, with numerous luxury hotel establishments and charming boutique hotels planned along the coast.

The country is becoming especially attractive for meeting organisers, whether they are focused on conferences or after-work incentives

The capital city, Zagreb, is accessible throughout the year, meaning it is becoming increasingly popular with MICE tourists. This growth comes at the same time as the opening of a new 65,000sq m, multi-floor terminal at Zagreb Airport, which opened its doors in March following an investment of €313m ($349m). In addition, the arrival of Emirates Airlines at the airport has opened new possibilities for linking the Croatian capital with more than 150 destinations around the world.

In April, the town of Opatija also opened a multifunctional culture and tourism centre, which boasts several meeting rooms. Croatia is therefore continuing to improve the quality of its infrastructure and services, adapting them to suit the needs of the MICE sector. Moreover, the tourist and cultural attractiveness of the country, with its stunning heritage, wine routes, nature reserves, sports and local gastronomy, should not be forgotten. Several Croatian restaurants appeared in the prestigious Michelin Guide this year, while the country’s first Michelin star was awarded to the restaurant Monte, in Rovinj.

The top spots
The attractiveness of Croatia, a destination that has hosted the likes of Google, Dell and Mercedes-Benz in the past, has been proven time and again. In particular, a Google think tank conference, which was held in Dubrovnik in 2016, has shown the growing appeal of the destination alongside the mounting impact of digitalisation on the MICE sector. This was the first tourism conference in Croatia devoted to online marketing and the reputation of tourism, and brought together eminent representatives of tourist communities, consultants and entrepreneurs from the MICE sector. The conference also served as a perfect opportunity to present the most up-to-date tools for more efficient advertising, as well as to raise awareness of the importance of investing in an online business segment, especially in tourism.

With regards to business tourism, centres in Croatia, Zagreb, Dubrovnik and Opatija are firm leaders within the country. Together with the nearby city of Rijeka, Opatija offers around 15,000 seats in more than 130 halls, all equipped with state-of-the-art technology. Zagreb is both charmingly relaxed and a city teeming with business opportunities, full of historical monuments and romantic stories while also dynamic, modern and hospitable. Filled with green spaces, the city has a variety of beautiful parks and recreational areas.

Dubrovnik, meanwhile, offers numerous possibilities to those choosing it as a destination for business combined with history and culture. The city’s conference facilities boast more than 8,000 seats across hotels and other meeting venues. Its rich history, ideal geographic location, mild climate and tradition of excellence in tourism make Dubrovnik Croatia’s undisputed convention centre, with more conventions, congresses and corporate incentive programmes on offer than anywhere else in the country. The city also has a rich hotel offering, with plenty of four and five-star hotels perfectly suited to being hosts for both large and small meetings.

The quality of bidding in these cities has reached such a high level that they regularly conquer the most prestigious professional awards in global competitions. This success is thanks to the quality and diversity of the country’s congress facilities, the richness of accompanying tourist facilities and attractions, and good traffic links with European capitals and broadcasting markets.

Opatija’s position near the top of Croatia’s MICE offering is also not surprising, as it is already a flourishing tourist destination that also offers first-rate facilities for the MICE segment. However, it should be emphasised that Zadar – European Best Destinations’ most attractive destination in Europe for 2016 – is taking a more solid position on the map with regards to the focus of Croatian business tourism. Enchanting results can also be found in Split and Istria, as well as the island destinations of Brač and Lošinj.

Transforming cities
In June, Dell EMC held its fourth CEE Distribution Forum in the district of Bale, located near Rovinj, Istria. Almost entirely made of stone, this small district was recently transformed into a conference venue, becoming a perfect place for Dell EMC to gather around 200 managers, distributors and delegates from partner companies. For three days, Bale became an exclusive Dell centre and was decorated with the company’s world-famous insignia.

The reception took place in the main city square, and the participants slept in private accommodation. Lectures, discussions and product presentations were held throughout the city, from the castle and the main square to the sports hall. Here, an impressive expo space was set up, with Dell presenting its new digital products and services.

Whether exploring the UNESCO World Heritage Site that is Dubrovnik’s Old Town, taking an island-hopping tour around the Split archipelago, truffle hunting in Istria, paragliding across the Plitvice Lakes, delving into Zagreb’s streets and hidden passages, bird watching in Kopački Rit, partying the night away at Zrce beach in Novalja, or taking time out with the family on Zlatni Rat beach, there truly is something for everyone in Croatia.