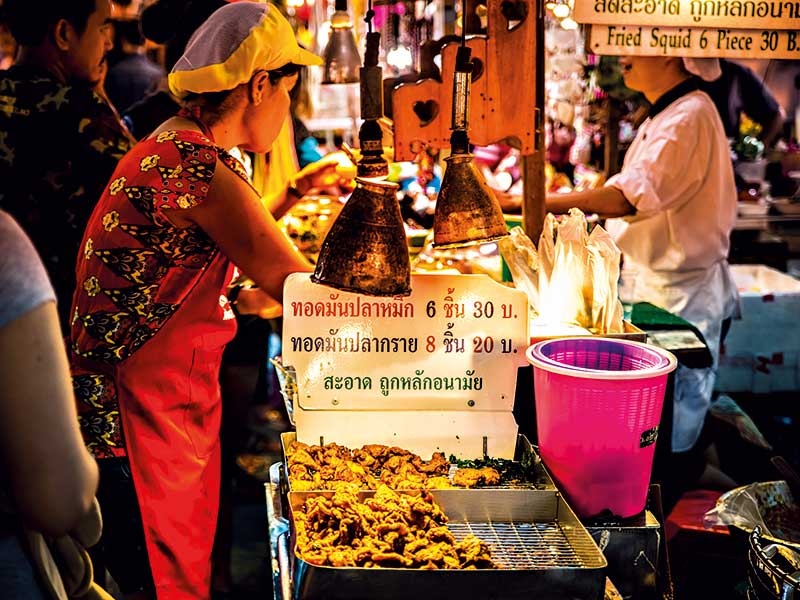 The street food business is largely run by experienced, elderly chefs, and is now suffering from a lack of young successors

Savouring the aromas and flavours of local cuisine is one of the most integral aspects of any holiday experience. Food provides a delicious gateway into regional identities, and there is no better way to truly experience the local buzz than to sample an array of tempting delicacies at a humble street food stand.

Whether it be Mexico City’s flavoursome roadside tamales or Hanoi’s delectable bánh mì, traditional street food dishes have captured the hearts of travellers from around the world, prompting many to try and replicate these rich flavours in their own kitchens once they return home. Of course, outdoor dining is best suited to warmer climates, so it is perhaps unsurprising that the finest street food offerings are to be found in the bustling colonial plazas of Latin America and the vibrant markets of South-East Asia. While each nation boasts its own unique trove of culinary delights, the Thai capital of Bangkok might just be the world’s top destination for street food fanatics.

Bangkok authorities have been slowly but surely cleaning up the city streets, and hawkers have been their prime targets

From its spicy shrimp soups to its ubiquitous pad thai, the city boasts a rich variety of hot and cold dishes, as well as an abundance of skilled roadside hawkers. Locals and travellers can be found sitting side-by-side in Bangkok’s street food eateries, hungrily slurping bowls of noodles and munching on spicy papaya salads.

For some decades now, the city has been internationally recognised as a world-class street food destination, and a must-visit location for the food obsessed. It therefore came as a nasty shock to foodies worldwide when Thai authorities unceremoniously announced they would soon be banning street food from the city’s major roads.

So long, street food
On April 18, just four days after Bangkok was named the best street food city in the world by CNN, the front page of Thai daily newspaper The Nation declared: “BMA bans all street food across Bangkok this year.” The article quoted a Bangkok Metropolitan Administration (BMA) representative, Wanlop Suwandee, who reportedly said: “The BMA is now working to get rid of street vendors from all 50 districts of Bangkok and return the pavements to the pedestrians.”

The news spread across national and foreign media outlets like wildfire, prompting widespread outcry from locals and travellers alike. Culinary enthusiasts from around the world were united in lamenting the loss of the nation’s beloved street food stalls, and were left wondering if they would ever be able to experience an authentic plate of som tam again.

As uproar over the decision mounted, confusion quickly began to spread among locals; a flurry of contradictory reports and misleading statements from officials made it increasingly difficult to tell exactly what the proposed ban would entail. In a televised interview held just days after the initial announcement, Suwandee confirmed the vendor-heavy areas of Siam Square, Victory Monument and parts of Sukhumvit would soon be cleared in order to rid the sites of bumper-to-bumper road congestion.

Suwandee appeared to suggest, however, that the popular tourist hubs of Khaosan and Yaowarat would be safe from the clear-out, with vendors allowed to continue running their food stalls without disruption.

“I’ve heard that it’s not necessarily a citywide exercise,” said KF Seetoh, a Singaporean street food specialist. “I understand that it’s mainly about easing pedestrian flow by reducing traffic, and that they’re also looking at how they can introduce better hygiene and food safety practices among hawkers.”

The April announcement may have been the city’s first blanket ban on street food, but it is not the first time Bangkok’s famed foodie haunts have come under pressure from the local authorities. For some time now, the Bangkok authorities have been slowly but surely cleaning up the city streets, and hawkers have been their prime targets.

According to the BBC, nearly 15,000 vendors were evicted from 39 public areas across Bangkok between 2015 and 2016, and many others have since been cleared out of guidebook ‘go to’ areas, such as Siam, Pratunam and the Old Town Flower Market.

Looking forward, tighter restrictions on service times and food hygiene may well see more hawkers shutting up shop, dealing a further blow to the city’s celebrated food culture. As the authorities look to relieve Bangkok of smog and traffic, they are in danger of stripping away the city’s soul.

Roadside refinement
While new regulations threaten street food culture in Thailand, roadside dining elsewhere is undergoing a very different kind of transformation. In July 2016, two Singaporean street food stalls made culinary history when they became the first hawker stands to be awarded a prestigious Michelin star. And, while the accolades have propelled the veteran chefs of Hill Street Tai Hwa Pork Noodle and Hong Kong Soya Sauce Chicken Rice and Noodle into the international spotlight, their Michelin-starred food comes without a Michelin-starred price tag.

Food fanatics may have to stand in line for at least an hour if they want to taste Chef Chan Hon Meng’s award-winning soya sauce chicken, but the dish will only set them back a paltry $1.50. After parting with this pocket change, diners can sit down to enjoy their meal in a traditional Singaporean open-air food court, balancing their plates on rickety plastic tables while they battle against the tropical climate. In this way, Chef Chan’s stall still provides an authentic street food experience, while his Michelin star rating has elevated his food to the global stage.

“This recognition is set to have a lasting impression on the market,” said Seetoh, who founded the street food heritage company Makansutra in 1997. “Heritage street food is no longer simply about cheap food, but now it’s about a brand. Street food isn’t just offered in the streets these days – it’s available in cafes, restaurants, hotels and even western Michelin-starred destinations such as Chef Jean-Georges Vongerichten’s Spice Market.”

Indeed, the global appetite for street food dishes has been growing for some time now, with tacos and pad thai becoming menu staples in many western restaurants. What’s more, street food markets have sprung up in cities without any real historical tradition of roadside cuisine, London being one such example. Street food collective Kerb now runs roadside lunch markets in the heart of the city’s financial district, with vendors ditching British cuisine in favour of more exotic street food offerings. For the city’s street food fanatics, a British burger van simply doesn’t cut it anymore, and the traditional roadside delights of South-East Asia appear much more appealing. With upmarket street food now selling for a pretty penny across European capitals, we are witnessing a profound change in the way the culinary industry regards hawker cuisine.

Flavours worth savouring
At present, global street food is undergoing some significant transformations, both at conceptual and ground levels. And yet, as the industry adjusts to these changes, some street food fanatics are afraid hawker food might be in danger of losing what once made it so special. In Thailand, as hawkers are forced off the streets and into more conventional restaurants, street food could become rather far removed from its communal and informal origins.

In cities around the world, street food acts as something of an equaliser, bringing together people from all walks of life as they brave the midday sun for a lunchtime khao gaeng or choripán. If the street food experience evolves into a more formal restaurant experience, then these positive roadside interactions will be lost.

Further, the street food business is largely run by experienced, elderly chefs, and is now suffering from a lack of young successors. Many hawkers have spent years perfecting their recipes, fine-tuning dishes that have been passed from generation to generation. Over the last half a century, however, access to education has improved significantly throughout the developing world, with 90 percent of the world’s children now attending primary schools, compared with less than 50 percent in 1950.

Fewer youngsters are entering the hawking business, and ageing street sellers are struggling to keep their recipes alive

“Street food culture is in a sense fading away, very slowly but surely,” said Seetoh. “Street food has a rich heritage, and has a real hold on the local people. In this way, preserving recipes also helps to preserve cultural identity.”

Indeed, this question of how to best preserve and protect kerbside cuisine was a central theme at this year’s World Street Food Congress, which was held in Manila in early June. Founded by Seetoh in 2013, the annual event brings together hawkers, chefs and street food fanatics from around the world, celebrating the successes of the industry and discussing its many challenges.

This year, speakers including Anthony Bourdain tackled the question of the Thai ban, and debated how to effectively protect this beloved craft from such threats. From street food schools to enforced legal protections, the food-focused event threw up a variety of visions for the future of street food.

As Thai authorities continue to crack down on street vendors, we can be sure global street food will face some significant challenges over the coming years. But, as the world continues its love affair with kerbside cuisine, we are all able to have a positive impact on street food, simply by wielding our purchasing power. As Bourdain told crowds at the Manila congress: “The more street food we have, and the more it’s embraced by every income strata, the better world we have.”