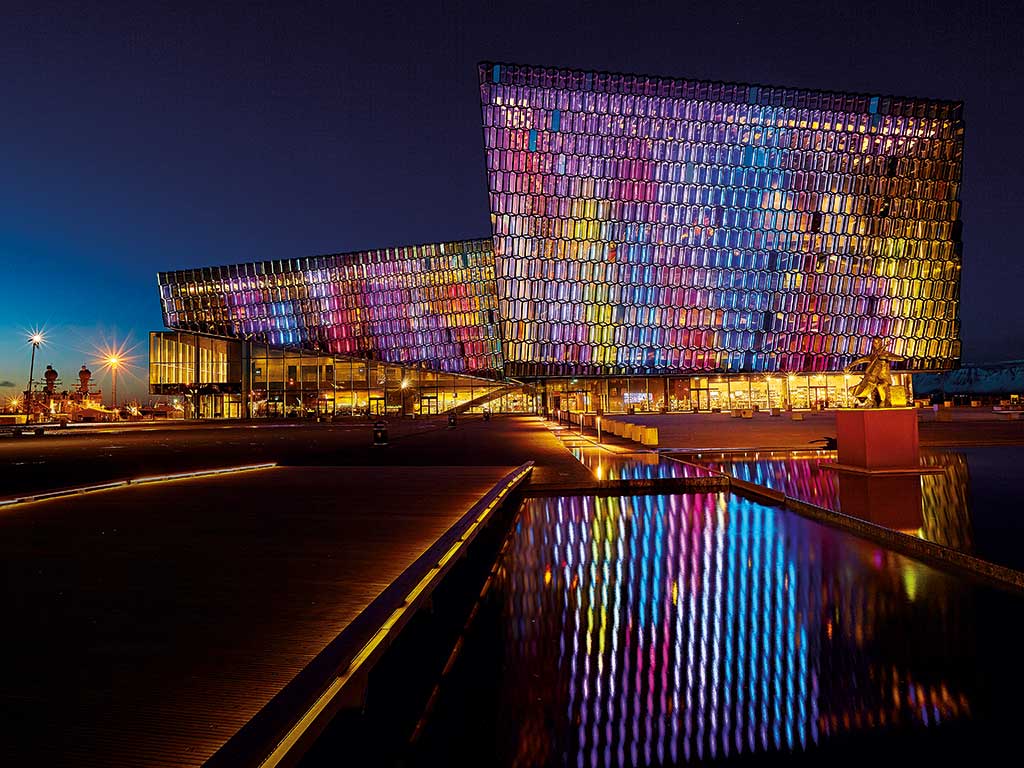 At night, shimmering coloured light displays sweep across the Harpa Concert Hall and Conference Centre, mimicking the Northern Lights in the skies above

In just a few years, Iceland has been transformed from Europe’s best-kept secret into the location of choice for conferences, conventions, incentive events and product launches – not to mention becoming a magnet for tour groups.

Iceland has become a year-round destination. Offering the beauty of the midnight sun in summer and the Northern Lights from autumn to spring, its four distinct seasons each provide a completely different view of the landscape.

A major feature of Iceland’s transformation was the redevelopment of Reykjavik’s harbour area from a fishing port into a culture and entertainment district. Its focal point was a bold and ambitious project, first conceived in 2004: the construction of a large concert hall to provide a home for the Iceland Symphony Orchestra, the Icelandic Opera and the Reykjavik Big Band right in the heart of the colourful and charming city. In a country with only 330,000 inhabitants, this might seem like a strange choice, but culture has always been fundamental to the Icelandic way of life.

The visionaries responsible for the design went much further than planning a simple hall, however. Their plan was to create a cultural centre for the entire northern hemisphere – a hub for every kind of meeting and event.

Phoenix from the ashes
As Iceland is a strong promoter of green energy, Harpa’s design uses natural lighting to maximum effect: the facade absorbs and reflects light and the internal walls capture and radiate the sun’s heat, while natural geothermal energy provides additional warmth and power. This technology makes Harpa a 28,000sq m masterpiece of environmentally clean energy.

Harpa epitomises Icelanders’ way of thinking in terms of solutions, rather than problems

The economic crash of 2008 almost killed the then half-built project. Critics at the time called Harpa a folly and an expensive white elephant, but the Icelandic Government and the City of Reykjavik, sensing the hall’s future value, committed to its completion. Icelanders have a reputation for their hard work and enterprise, and so young and old came together to modernise and rebuild their economy.

On December 11, 2009 (the Day of Icelandic Music) the building’s bare structure was named, and Harpa became the symbol of the phoenix rising from the ashes – a country being reborn and finding its new place on the world stage.

One with nature
Harpa is a venue for music, culture, conferences, conventions and gatherings, both Icelandic and international. Its design therefore called for a multi-purpose construction, with different hall sizes, meeting rooms, areas for exhibitions and receptions, shops and services, restaurants and a large underground parking area.

Its iconic design owes much to the Icelandic landscape and geology. Set out into the bay with the sea, mountains and glaciers forming a unique backdrop, the radical design of a quasi brick and glass facade was inspired by the basalt columns found in locations such as the Skógarfoss waterfall. At night, shimmering coloured light displays sweep across the building, mimicking the Northern Lights in the skies above.

The names of the four main halls correspond to the elements of fire, air, earth and water. The largest hall, Eldborg (‘fire castle’), is named after the volcanic crater in West Iceland. It seats up to 1,800 guests in a vibrant setting.

The smaller recital hall, Norðurljós (‘Northern Lights’), has a deep blue decor and can be reconfigured to suit conferences, jazz and chamber groups, receptions or functions. It can also be combined with Silfurberg, the main conference hall, for larger functions. Silfurberg accommodates up to 840 guests but can be divided in half for smaller events.

Water is represented by Kaldalón (‘cold lagoon’), the smallest hall, which can seat almost 200 guests. The hall is named after the beautiful blue bay in the Westfjords, the birthplace of one of Iceland’s most celebrated songwriters, Sigvaldi Kaldalóns.

Internationally recognised
Since its formal opening on May 4, 2011, more than seven million visitors have passed through Harpa’s doors, placing it in the top tier of concert and conference centres worldwide.

Harpa has received numerous awards in that time, signalling that it offers some of the best concert and conference facilities in northern Europe. In 2011, Gramophone magazine named it one of the concert halls of the new millennium, and Travel and Leisure magazine chose it as the best performance venue. In 2012, Harpa was named the Best MICE Centre in Northern Europe at the MICE Report Awards, while its design won the Mies van der Rohe architecture award in 2013. It has now been awarded the 2016 Business Destinations Travel Award for the Best Meetings and Conference Centre in Europe, firmly cementing a sterling reputation that has been built over just five years.

But how did Harpa get here? First, Iceland has been rapidly developing its infrastructure and boasts a highly trained and qualified workforce, almost all of whom speaks English (and often several other languages). New, top class hotels have been built to cater to business travellers and tourists, including the new Marriott Edition five-star boutique hotel, which is currently being built alongside Harpa. This 250-room hotel will revolutionise the hospitality industry when completed in 2018. The Hilton Reykjavik Nordica and Hilton Canopy lifestyle hotels are also within easy reach.

Second, Harpa has a full in-house catering service, while a wide range of restaurants with international cuisines is available within a short walking distance. Traffic is rarely a problem and there is a very low level of pollution compared to other cities. This is a country of fresh air, stunning vistas and natural sights that take visitors’ breath away.

Growing popularity
Iceland has seen a steep rise in the number of conferences and conventions since Harpa opened, from an average of one conference with 1,000 participants every third year to between three and five conferences of that size every year. In fact, Harpa now hosts between 12 and 15 large international conferences (of more than 500 attendees) a year, as well as dozens of smaller meetings and events, both national and international.

Harpa now hosts major conferences on a frequent basis. For instance, the Arctic Circle Assembly, founded by former President of Iceland, Ólafur Ragnar Grímsson, heard an address by the UN Secretary General at Harpa this year, and by the President of France in 2015.

With airlines flying from around 80 destinations from both Europe and the Americas, conference attendees are recognising the value of visiting Iceland with their families, combining business with pleasure and staying longer to enjoy the experience. Harpa is open daily from 8am to midnight, so families can go whale watching, shopping or take trips right from the building.

Harpa epitomises Icelanders’ way of thinking in terms of solutions, rather than problems. Halls can be easily adapted, and the whole building offers open spaces for additional rooms or displays. For example, taking advantage of Harpa’s advanced technical facilities, LG transformed a hall by turning it black, making it the perfect backdrop for the mid-summer launch of the company’s new OLED 4K TV range. The transformation spectacularly displayed Iceland’s night sky and Northern Lights in contrast to the 24-hour sunshine outside.