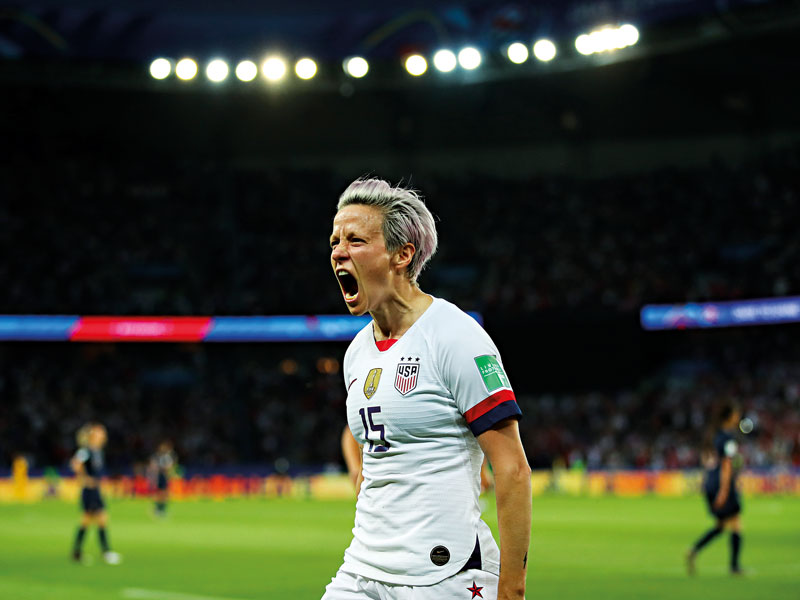 Megan Rapinoe, a co-captain of the US women’s team who led her team to victory

On Boxing Day in 1920, 53,000 supporters gathered in Liverpool, UK, to watch Dick, Kerr Ladies Football Club take on St Helen’s Ladies at Goodison Park. Women’s football had grown in popularity during the First World War and Dick, Kerr Ladies Football Club – named after the munitions factory in Preston where the players worked – had regularly drawn large crowds to its games. Unfortunately, it was all downhill from there.

Just a year after the encounter broke the record attendance for a women’s club match, England’s Football Association effectively banned women from competing in the sport by barring them from using official football pitches. England’s female footballers weren’t the only ones to be stopped in their tracks: similar bans halted the growth of France’s premier women’s division, the Championnat de France de Football Féminin, in 1932, and prevented a group of women from establishing a professional competition in West Germany in 1955. According to a report by The New York Times, Spanish law still technically prohibits the formation of a professional women’s league.

In fact, women would continue to be banned from the sport in many parts of the world for much of the 20th century. And while the women’s game’s recent renaissance has presented significant opportunities to brands, there is still much to be done to unpick the inequality that is rife within football.

Getting the ball rolling
The third FIFA Women’s World Cup, held in the US in 1999, was a pivotal moment in women’s football. The final match between the US and China drew in 90,185 fans, a figure that remains the record attendance for a women’s sporting event to this day. Unsurprisingly, the tournament has often been hailed as having been the catalyst for the sport’s current popularity: in the 20 years that have passed since, women’s football has been taken to another level, with the 2019 FIFA Women’s World Cup signalling a new era of professionalisation. FIFA Secretary General Fatma Samoura even told CNN that this year’s tournament was the most important in the competition’s history – a claim that was reinforced by its record-breaking viewing figures.

Women’s football has been taken to another level, with the 2019 FIFA Women’s World Cup signalling a new era of professionalisation

According to Lynsey Douglas, the global lead of women’s sport at research firm Nielsen Sports, women’s football is growing around the world. In fact, Douglas told Business Destinations that 36 percent of the football supporters the firm surveyed across 24 markets said they were fans of women’s football, representing an audience of 314 million people. And there is evidence that tournaments such as the FIFA Women’s World Cup spark significant growth: for instance, Douglas said interest in women’s football at the time of the 2015 FIFA Women’s World Cup spiked by 40 percent when compared with the two previous years.

“Major tournaments and success have an impact,” Douglas said. When Japan won the 2011 FIFA Women’s World Cup, levels of interest in the country doubled, while the US’ victory in 2015 saw American interest increase by 58 percent. Douglas did concede, however, that these figures still vary significantly on a country-by-country basis. In the US and the Netherlands, for example, more than half of football fans follow the women’s game; in areas such as Russia and Indonesia, less than 10 percent take an active interest.

“The reasons for this could be many things, including the wider picture of gender equality in the country,” Douglas said. “However, specifically looking at women’s football, it’s likely related to the investment and promotion of the women’s team and leagues in the country.”

An open goal
According to Douglas, the growing interest in women’s football represents “a huge potential audience for brands to engage with”. While sponsorship in the top tier of men’s football is approaching saturation point – any potential investor requires deep pockets to establish a deal – the women’s game offers fertile ground at a lower price point.

Sam Grimley, Commercial Director at GumGum Sports, a company that uses artificial intelligence to track the value of advertising in sport, agreed with Douglas, telling Business Destinations that women’s football will present a “huge, untapped market” to brands as it becomes more mainstream, especially to those that don’t see the men’s game as reaching the right target demographic.

Between 2013 and 2017, sponsorship deals within women’s sport grew 37 percent, according to Nielsen Sports. In recent years, a number of corporate giants have signalled that they’re taking notice of this investment opportunity. Barclays, for instance, signed a $13m deal with England’s newly formed Women’s Super League – the largest single investment in British women’s sport by a business. Barclays CEO Jes Staley said he hoped the multi-year deal would boost the professionalisation of the sport and make “England’s domestic league a world leader”.

Elsewhere, French telecommunications firm Orange signed on as a national supporter of the FIFA Women’s World Cup in a bid to “reaffirm” its commitment to women’s football and equal opportunities, while Commerzbank, Germany’s second-largest lender, celebrated a decade of supporting the national team with an advertising campaign targeting the prejudices that the players have faced in the past. The 2019 FIFA Women’s World Cup also marked the first time Nike launched kits specifically designed for women’s teams – in the past, they have had to settle for derivations of the kits worn by their male counterparts.

Another large slice of corporate sponsorship comes in the form of broadcast deals. Although linear broadcasting is still important, Grimley believes social media has played an integral role in opening up women’s sport to the masses: “Without the uptake of social media, the women’s game probably wouldn’t have had the ability to [achieve] what it’s getting now in [terms of] broadcast [exposure].” Today, huge sporting social media outlets such as COPA90 and GiveMeSport are introducing a wider audience to women’s football. “Social [media] sort of strips out [tribalism],” Grimley said. “I think the way in which content is consumed is really going to help all sports, [but] especially women’s sport because it no longer becomes a niche.”

Social media also allows players to take the lead in growing their own influence, bypassing the traditional media outlets that, as Douglas put it, “haven’t previously given the time and space to women’s sport”.

Foul play
Many of the barriers that previously stood in the way of women’s football have started to fall, but the pay disparity between male and female players is still striking. For example, although FIFA has increased the prize money for the Women’s World Cup five-fold since 2007 to $30m, that figure is still dwarfed by the $400m made available to the men’s competition last year: while the winning nation of the men’s cup took home $38m, the women’s winners received just $4m.

A 2017 report by FIFPro, the global footballers’ union, found that female players earn just $600 a month on average, while 50 percent of the players get no pay at all. Nearly half of all players also have no employment contract, and 30 percent have to work a second job to supplement their income. Some nations, such as Thailand and Jamaica, still completely rely on the support of wealthy benefactors.

Many female players argue that this lack of monetary support is responsible for holding the sport back. Even in the US – home to the world’s top-ranked women’s team – dozens of players have filed a lawsuit against the US Soccer Federation alleging gender discrimination and unequal pay. It seems they have a point: according to The Wall Street Journal, female players in the country still earn far less than their male counterparts despite having generated more revenue between 2016 and 2018. Fresh calls for pay equality arose after the US women’s team scored more goals in its opening game of the 2019 FIFA Women’s World Cup (a 13-0 win against Thailand) than the men’s national team had scored in the past three tournaments combined.

The lack of support players feel extends beyond their pay package. Ada Hegerberg, the winner of 2018’s inaugural Ballon d’Or Féminin, which honours the top female association football player, has been boycotting her national team since 2017 over an alleged lack of support for the women’s programme. Hegerberg was left equally unimpressed when she was asked if she “knew how to twerk” while accepting the trophy in December 2018.

“Women national team players around the world should receive equal treatment to their male national team counterparts,” a FIFPro statement, issued in response to renewed calls for an increase in women’s prize money, read. “This should include their travel and accommodation, as well as their medical treatment and financial compensation.”

A lack of pay and support creates a vicious cycle that holds the sport back from larger sponsorships and further professionalisation. To make a more measurable change, many have suggested that grassroots investment is needed. “The key parts of the commercial life cycle are sponsorship, media rights, attendance and merchandise, and these are driven by [the] interest and engagement of fans,” Douglas said.“I believe it takes investment and support in one part to drive the others.”

To address this, FIFA and the Union of European Football Associations (UEFA) have begun to take steps to encourage the growth of the sport from the ground up. FIFA, for instance, aims to double women’s participation in football to 60 million by 2026, while UEFA has unveiled a plan to deliver 50 percent more funding from 2020, as it works to make football Europe’s top female sport.

Some still argue these efforts must go further. Megan Rapinoe, a co-captain of the US women’s team who has been outspoken on issues ranging from LGBTQ inclusivity in football to US President Donald Trump, told The New York Times: “The incremental change we have seen is not enough. There has been such a lack of care, attention and investment for all these years that doubling, tripling or quadrupling the care, attention and investment would be appropriate.”

The recent pace of change is encouraging for anyone with a stake in women’s football, whether that’s the players, sponsors or the fans. With the next FIFA Women’s World Cup now four years away, the clock is ticking for industry leaders to make the necessary changes that will propel the sport to the next level.