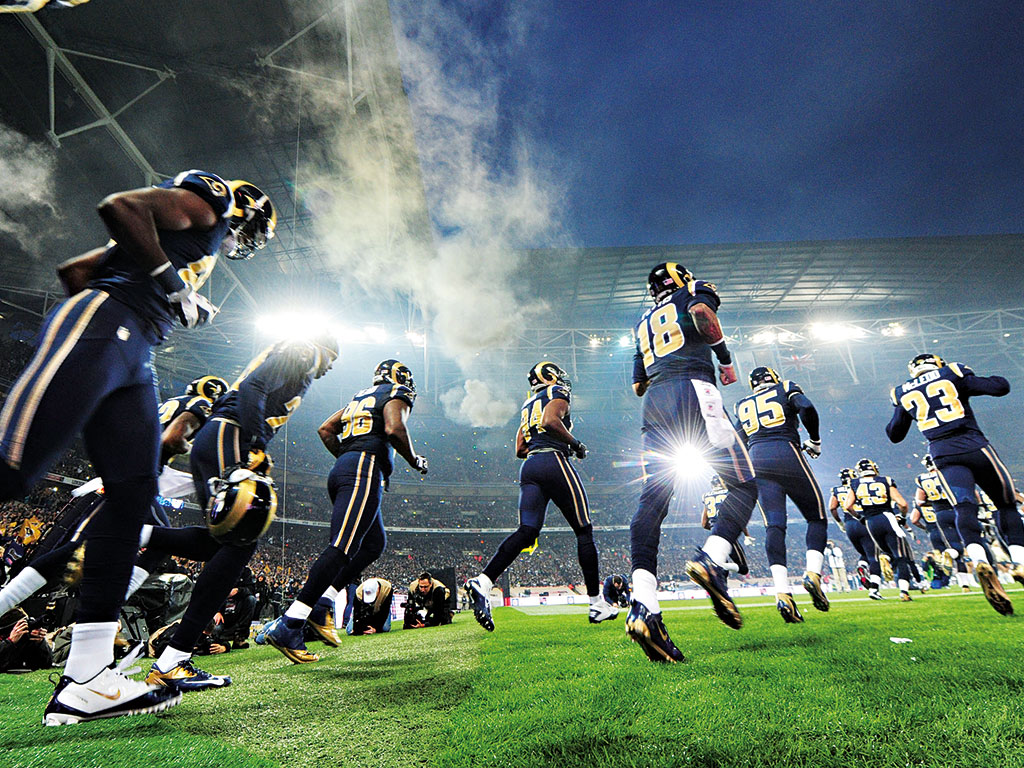 The NFL has failed several times to convert Europeans into American football fans. A continental league ran from 1991 to 2007, eventually closing due to small attendance rates at games and financial losses

For many people outside of the US, the idea of American football being unanimously embraced by sport fans seems far-fetched. And yet, a sport that has only ever been enthusiastically played by the country that spawned it has still managed to capture itself a significant global audience. On top of that, it is also one of the most lucrative sports in the world, both for club owners and the sponsors desperate to associate themselves with it.

However, in Europe, sport fans are much more likely to favour the traditional form of football – or soccer, as Americans call it. A thriving and rabidly obsessive number of such fans are found throughout Europe, with fiercely competitive leagues and Europe-wide competitions captivating spectators over most of the year.

Indeed, the US has struggled over the last century to export its sports. While the country has easily persuaded people the world over to watch its films, eat its fast food and listen to its music, it hasn’t been so easy to get people to play its hugely commercialised sports. However, for a number of years now there has been talk of the NFL bringing gridiron (American football’s less popular name) to the shores of Europe, in the hope of it finally catching on and becoming a truly global sport. A number of hugely successful – and lucrative – showcase games have happened in London, while popularity in Germany has soared thanks to four NFL players hailing from the country.

Learning from history
The NFL has been looking to expand into Europe for many years, and this is not the first time it has attempted to launch a franchise on the continent. A long-running, yet ill-fated, European league was launched back in 1991 and ran in various forms until 2007. NFL Europe was backed by the US NFL, and culminated in an end of season match called the World Bowl. Players tended to be younger squad members of US NFL sides, with the parent clubs eager to get them some match experience. Teams were made up of the likes of the Amsterdam Admirals, the Hamburg Sea Devils, the Frankfurt Galaxy and the short-lived London Monarchs.

Despite heavy backing, however, few fans warmed to the sport. Attendance rates languished well below those of rival sports, with average games attracting just 18,000 spectators. By 2007, NFL Europe was disbanded after reports that it was losing around $30m each season.

International competition
However, despite the failures of NFL Europe, its North American parents have maintained an interest in developing the sport in Europe. In the same year that NFL Europe was disbanded, the NFL began its International Series of games, beginning with a game at London’s Wembley Stadium. A nine-year contract was then signed to host games there: these began as a single game each year, but the partnership saw such an increase in popularity that the arrangement was raised to three games each year.

The reason for the success has been the games being part of a regular NFL season. Instead of second-class players playing for recently established European teams, fans were being treated to the real deal – world famous NFL stars playing for world famous teams in highly competitive matches. Attendances have soared at Wembley, the 90,000-capacity home of English football, and money has poured into the game. Such has been the success that many have seen it as a precursor to a fully-fledged European NFL franchise.

Many British sports fans look down their noses at America’s leading sports – American football, basketball and baseball – as inferior versions of their own games of rugby, netball and cricket. While that may not be strictly fair to their US cousins, the British have traditionally been difficult to persuade when it comes to supporting American sports.

However, as has been seen from the success of the NFL International Series at Wembley, there is a rapidly growing demand for the sport in the UK – and, perhaps unsurprisingly, the NFL’s owners have been eager to tap into that.

The business of sports
Owners of NFL teams have been eyeing the European sports market for some time. Indeed, many see traditional football teams as a lucrative new market for them to partner up with: Jacksonville Jaguars owner Shahid Khan, for example, bought the then English Premier League club Fulham FC in 2013, investing around £200m ($312m) in the London-based club. He has since used his foothold in London as a means of bringing the Jaguars over to Europe, with the team signing a deal to play at least one game a year at Wembley.

10 years earlier, US businessman Malcolm Glazer and his family acquired England’s most successful football club, Manchester United. The debt-heavy deal was worth around £790m ($1.2bn) and was hugely controversial for fans of the English club. However, it was the first major move by a US NFL owner into English sport, with the Glazer family also controlling the Tampa Bay Buccaneers.

In July, a major step was taken to establish a London NFL franchise when English football club Tottenham Hotspur announced it had signed a 10-year deal to host NFL games in its new stadium from 2018. The multipurpose stadium will be designed to host both sports effectively – something Wembley has struggled to do – and it is thought that the move is a precursor to the stadium becoming a home to a fully-fledged franchise.

When announcing the deal, NFL’s Commissioner Roger Goodell said he recognised that demand was growing in the UK: “With growing enthusiasm for the NFL [in the UK], we are committed to hosting NFL games in world-class venues, and are excited to partner with Tottenham Hotspur to play games at their future stadium. We share a vision and commitment to creating the best experience for our teams, fans and the local community.”

London’s colourful mayor, Boris Johnson, also talked of his enthusiasm for more NFL games being played in the UK’s capital. “Anyone who has seen American Football at Wembley Stadium cannot fail to have been thrilled by the spectacle, and the wise heads that run the NFL have clearly not missed the fact that Londoners are going absolutely gangbusters for gridiron”, Johnson said.

He continued, “We are already working very closely with the NFL, including on plans to get more Londoners involved in the sport, and we believe that building on the success of NFL at Wembley by staging more games in an area of the city that has been earmarked for a massive programme of economic regeneration and investment makes perfect sense. Touchdowns in Tottenham can only add to our reputation as a global sporting powerhouse, and help us take another step towards our goal of having a permanent NFL franchise here in London.”

Bolstering economies
For both the NFL and Europe, a new franchise would prove economically attractive: US sports, and the NFL in particular, have become experts at monetising their games, and the huge sponsorship deals associated with an NFL franchise mean that there are plenty of cities in Europe clamouring to be the first permanent outpost for the NFL. Tottenham Hotspur’s deal to host a minimum of two games a season at its new stadium is seen by the club as attractive because it will catapult it towards a huge new market, and make securing a sponsor to help build the stadium far easier.

For London, the influx of money being spent on new large-scale sporting events on the annual calendar is clearly appealing. The UK’s Chancellor, George Osborne, has previously said the government was determined to make London the base of any future European NFL franchise. “Anything the government can do to make this happen we will do”, he told reporters in October 2014.

In a report conducted last year, accountancy firm Deloitte showed that the NFL’s International Series of games in London has had a big impact on the local economy, and further expanding it could boost the city’s economy by £102m ($159.3m) a year. Another study by Deloitte published the previous year suggested that the wider UK economy could benefit by around £144m ($225m).

Deloitte’s Dan Jones said in the report, “Our analysis demonstrates the impact the NFL International Series has on the London economy. It is a valuable addition to the capital’s calendar of major sporting events. If in [the] future the NFL were to have a London-hosted franchise, we estimate that could deliver at least £100m [$156m] of direct economic benefit, as well as further reinforcing London’s status as one of the world’s top cities for sport.”

A question of demand
However, while the owners, sponsors and fans all seem eager for an overseas expansion, the NFL is facing a challenge to persuade the players themselves that playing outside of the US would be a good idea. The players union has voiced concerns about how manageable such an expansion would be, not least through the draft system, where a young player would be forced to move to another country if they were picked by that franchise.

Another factor will be the tax and legal issues that a new team would face outside of US jurisdiction, although with so much money involved these don’t seem insurmountable. There are also logistical issues: while few sports could realistically include regular away games that are such a considerable distance from home, the NFL is rare in that there are relatively few games over the course of the year, and long breaks in between each one. At the same time, there have been suggestions that a compromise could see a European franchise ultimately basing itself at a training centre within the US, with teams merely flying to Europe for games. Hardly a full commitment to growing the sport outside of US borders, however.

Many in Europe doubt whether there is actually the demand for American football on the continent. It has so far proven to be a niche sport in Europe, with traditional football the real passion for sport fans. However, the NFL’s tentative approach towards showcasing limited numbers of games in Europe, and mainly in London, has seen packed houses and huge demand from fans. Whether this is down to the novelty of having NFL or reflects a proper desire to see regular games remains to be seen.

However, the NFL is clearly determined to grow: Chief of the Atlanta Falcons, Arthur Blank, told Sports Illustrated journalist Peter King last year that a London-based franchise could come sooner than many people were anticipating: “Less [time] than you’d think. The success has been remarkable, and I don’t see any reason why it’s going to slow down.”