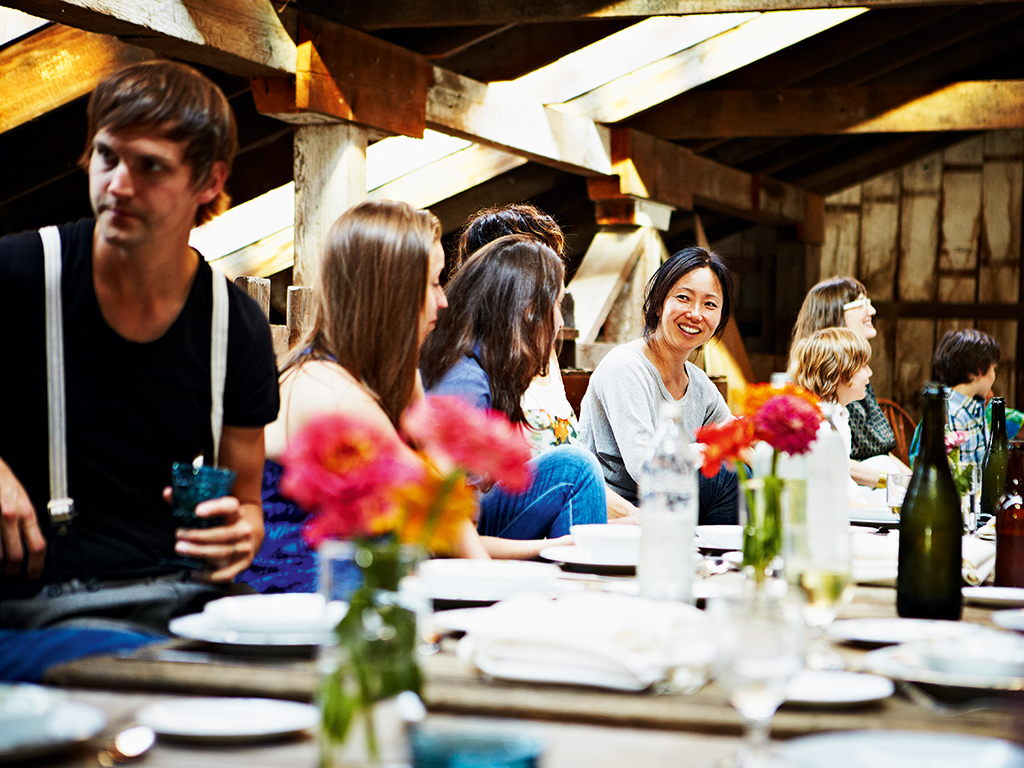 Social dining has become a craze worldwide, with keen cooks opening up their homes to feed strangers. Image courtesy of EatWith

Social dining apps offer a new take on eating in foreign cities. Instead of dining alone or paying for overpriced, under-flavoured food, these tech start-ups bring strangers together to share communal meals. Menus cater to all palates and there is something for everyone – from six-course gourmet cuisine to cheap and cheerful mac ‘n’ cheese. The market is full of useful apps, but EatWith offers the most for business travellers looking to shake up bland trips abroad.

Social dining is eating into an app industry worth over $50bn. And it’s an industry with huge growth potential – app analyst Vision Mobile suggests its worth could rise to $143bn by 2016. Apps benefit from the fact that nearly six billion people own mobile phones – only one billion less than the total population – and growth is phenomenal. In The Wall Street Journal Simon Khalaf of Flurry compared the app industry to cars at the turn of the last century: “You see the growth of roads and know they’re going to be big. But it is still early days.”

Supper clubs around the world

Sushi making: Tokyo, Japan
Not content with sitting back and being cooked for? Join Shinto to buy fresh fish and learn how to make three types of sushi: gunkan, makizushi and nigiri.
£66pp

Cocktails and hors d’oeuvres
Dinner with strangers can be overbearing – drinks and tapas in Guillermo and Cristina’s garden less so. “Forget about stress, we’ll help you relax in our oasis,” say the Catalonian hosts.
£7pp

The social dining phenomenon is a digital revolution in reverse as people use apps and websites to connect in the physical world. High-speed internet and media platforms have made the world an interconnected global village, but this is a paradox; social media produces feelings of loneliness too, according to the University of Michigan psychologist Ethan Kross. This is where EatWith comes in. It’s a social dining website that has broken the shackles of digital solitude by combining two things that are loved and loathed: technology and communal dining.

The peer-to-peer site allows users to eat in locals’ homes, bringing together people from all around the world for supper clubs, where they share cultural insights over home-cooked cuisine. Brunch, lunch or dinner is enjoyed from Buenos Aires to Barcelona. There are thousands of hosts, with tens of thousands of users and a supper club can be found most nights in over 30 countries, across five continents.

The site was launched in 2012 by Israeli duo Guy Michlin and Shemer Schwarz, who both still use their product avidly. Business travellers can use social dining as a way to shake up trips abroad. Networking opportunities, sampling local cuisine and getting cultural insights are some of the many benefits social dining offers. This was Business Destinations’ hypothesis, but we had to test it, at an all-vegan supper club.

Unique selling points
From the window of a quaint terraced house in north-west London wafts the inviting smell of onions and mixed herbs. Sweaty, tentative and typically late, it was a relief to find out I was still the first guest to arrive for the night’s supper club. The host Sara, a thirty-something self-taught chef, was incredibly friendly and seemed genuinely interested in getting to know her guests. Since 2012 she has hosted over 50 supper clubs.

The evening started with homemade elderflower lemonade – zesty and refreshing. Freshly baked sourdough followed, with beetroot crackers full of chia and flaxseed, cashew nut cream cheese and a rocket and watercress pesto lavished on top. Everything was made that day except the sourdough, which was proofed for 18 hours before baking. The starters were attractively presented and flavoursome.

Guests select pizza toppings from fresh ingredients arranged in clay bowls on the table. Among standard ingredients like mixed peppers, mushrooms and olives were unorthodox options: roasted carrots with rosemary, caramelised beetroot and fluffy squares of butternut squash all seasoned with Himalayan pink salt. Lambrusco Rosa – a vegan wine – was the alcohol on offer as conversation revolved around two topics: food and travel. I was the only guest that was neither a foodie nor a foreigner.

Over 40 percent of adults eat alone every day and this can have serious health effects in later life. In fact people who feel lonely most of the time have a life expectancy equivalent to a 15-a-day smoker

Elise from Montreal, Canada worked 16 hours a day as a chef on luxury yachts for stars including Pete Townsend of The Who. The Italian opposite me ran a vegan food blog, and the Swiss couple spoke enthusiastically about a website called Happy Cow – a directory of vegan-friendly restaurants in every major city in the world.

Two guests were regulars on EatWith and at Sara’s supper clubs. They keep returning because vegans in London are underserved, they say. The guests made it clear that vegan dining is still a niche market in London, but vegan is not the theme of all supper clubs. Underpinning EatWith is the ethos that all hosts should have a USP. This could be anything from pasta-making tutorials to artisan chocolate-tasting.

Shared meals have an ability to bring people together – my group was most loquacious when pesto was being liberally spread on bits of bread. Talking to strangers while you eat is something that would rarely happen in a restaurant. I had to ask – why do users prefer supper clubs to eating out?

“People prefer social dining because they can meet new people and experience real food made by home cooks. If you go to a restaurant the menu can be bland and boring, but at somebody’s kitchen, you will have on your plate a meal that is fun and delicious,” said Sara.

The disparity in price between social and restaurant dining is not that significant. It’s good value but little more. They tend to cost £20-£60 and EatWith pockets a 15 percent fee. Fortunately the hosts are not in it for the money and cooking is usually just a hobby. Some do aspire to be full-time chefs. Sara regards EatWith as a cost-effective platform for promoting her cooking and hopes it can help her open a café in the Mediterranean – “perhaps in Sicily or Greece”.

Coincidentally, social dining has its roots in ancient Greece, where wine and olives were used to bring plebeians together. Food was the catalyst for galvanising disengaged communities. Today, the internet has made social dining a digital, shareable experience. Real-time updates, reviews and easily disseminated photos give supper clubs a global reach. “Meeting new people in the real world is almost a thing of the past. There is a yearning for real life interactions [and this] explains the rise of social dining,” says Joel Serra-Bevin, Global Community Manager at EatWith.

Serra-Bevin believes the site is perfect for people who work abroad: “Business is all about relationships, which is why conferences are really about networking. Everybody knows that handing someone a business card will probably get you nowhere near the person you need to connect to. The EatWith setting is very authentic and it really shows someone’s true colours, which in some cases can be more important in business relationships than in casual ones.”

Social dining entrées
EatWith is the best option for business travellers hungry for cultural enlightenment, but there are lots of other social dining apps on the market. Grouper has gained the most mainstream popularity for two reasons: it emphasises the importance of having fun and, crucially, users have to bring one or two friends along to form blind-date brigades. This eradicates the awkward atmosphere that sometimes occurs when meeting strangers alone. Grouper is technically a drinking app, verging on a dating one. “Play vodka roulette, ice someone, dance on a table, crash a warehouse party or take a selfie with a stranger” is their description of a standard social. A tad reckless for those with morning meetings, but Grouper is a fun way of getting to know the locals.

The social dining phenomenon doesn’t mean food or drink has to be communal. LeftoverSwap lets people experience social dining without the hassle of being social. Its purpose is self-explanatory: users swap leftover food. For example if there is a remaining slice of pizza from a takeaway, get a photo of it, upload it to the app and someone nearby might claim it. Overcoming the ‘yuck’ factor is an issue, but the app could be revolutionary – currently, one third of food is thrown away every year.

As tech firms shift their attention to profitable hook-up and dating apps, experimenting with social dining can be beneficial in more ways than one. Over 40 percent of adults eat alone every day and this can have serious health effects in later life. In fact people who feel lonely most of the time have a life expectancy equivalent to a 15-a-day smoker, according to the Campaign to End Loneliness. Trying something new, like eating with strangers, helps to improve a positive disposition. This, in turn, can increase income by up to $314,000 – employees with flexible personalities are more likely to be promoted, claims Psychology Today.

Start-ups such as EatWith offer an exciting way to try local food abroad, but whether more people dare to eat with strangers remains to be seen. For those that do, a world of culture, good food and new friends is a click away.