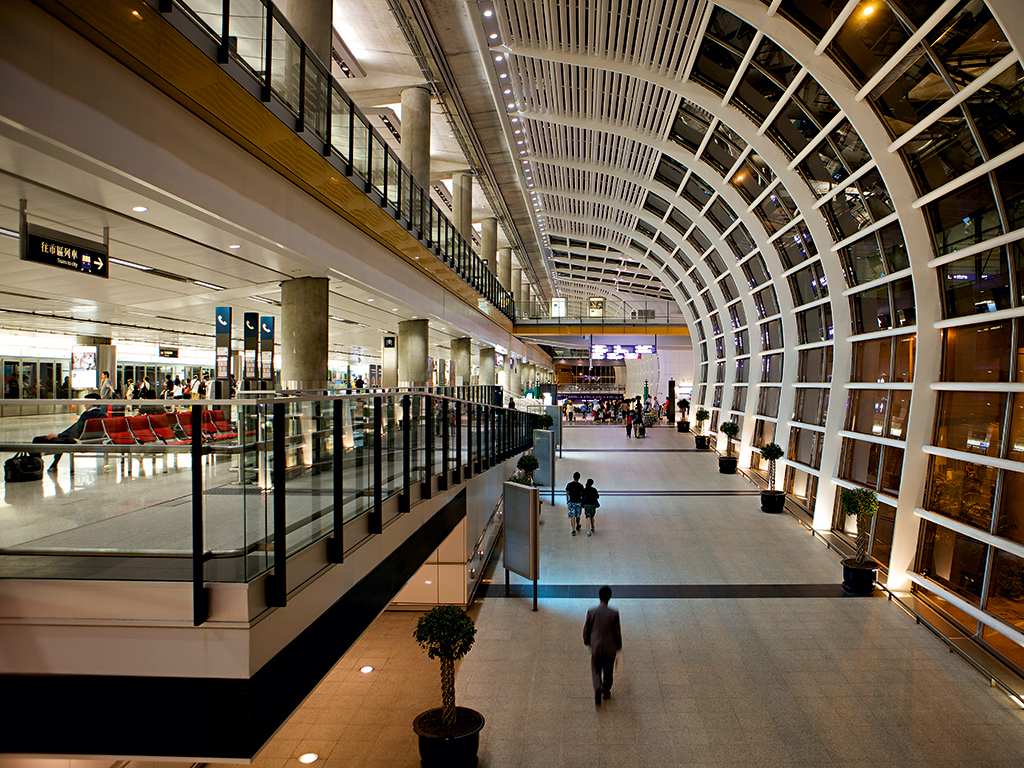 While long-haul travel can be tiresome, passengers are now spoilt for choice when it comes to stopover destinations, with airports such as Hong Kong International (pictured) offering a wealth of entertainment, restaurants and outlets to explore

Long-haul flights aren’t a thing travellers typically relish. With the prospect of hours and hours spent up in the air, before the slow and tedious process of disembarking halfway to a destination in a country they have no plan on actually visiting, it’s enough to make some think twice about flying at all. However, until the day when super-planes rocket us non-stop across the world, travellers are going to have to get used to spending a few hours in the departure lounges of random airports.

Thankfully, many of these airports realise that people passing through them will likely spend money while they do, and even have the potential to be future tourists. They’ve therefore spent huge sums of money ensuring each of their airports is stocked with the latest luxuries, as well as a taster of what’s on offer were travellers to actually visit the countries they’ve paused in. Below are Business Destinations’ top five airports that all long-haul flyers should hope to change flights in.

Hailed as the most lavish airport in the world, Dubai has invested vast quantities of money into constructing a hub that bridges east and west. Much as the city is the playground of the Middle East, the airport reflects the modern luxury the emirate is known for. Constructed initially in 1960, the airport grew rapidly during the 1990s, sprouting three terminals that serve many of the world’s leading airlines. The most prominent of these is Dubai’s Emirates airline, which accounts for 64 percent of all the airport’s passenger traffic. The various features catering to health and fitness nerds include a pool and jacuzzi at the luxury 24/7 G-Force Gym. Then there is the staggering amount of shops, with 58,000sq ft of retail space representing the world’s largest duty free. As well as all these stores, there are high-end restaurants in which to while away the hours, including the Caviar House & Prunier Seafood Bar. For weary travellers in need of rest before another flight, try the tree-lined outdoor Zen gardens, or the SnoozeCubes in Terminal 1 that have a full-sized bed, touchscreen TV and free wi-fi.

Despite the frequent tales of horrendous queues, overcrowding and cancelled flights, Heathrow has been modernising its terminals for a number of years now. While the launch of Terminal 5 in 2008 was beset by problems, it has ushered in a new wave of modern luxuries previously unknown to those passing through Britain’s airports. Terminal 5 is now renowned for its many boutique shops, including an 11,000sq ft Harrods, as well as outlets of Gucci, Burberry, Paul Smith, Tiffany, Dior and Bvlgari. World-famous chef Gordon Ramsay has even opened a restaurant there – Plane Food – and there are plenty of other options to choose from. The newly refurbished Terminal 2 has built on Terminal 5’s reputation for high-end services, with restaurants that include sushi and a traditional French brasserie. There are also the innovative Yotels, from the founders of Yo! Sushi, giving travellers a hotel experience within the terminal. With Heathrow pushing for a third – and maybe fourth – runway, further capacity at the terminals is expected, and with it a whole range of modern services designed to ensure travellers no longer think of the airport as an irritating stop-off on their way to somewhere better.

Asian airports have led the way in extravagant luxury, with many newly built hubs providing a wide array of unique experiences. Hong Kong, one of the region’s most important business destinations and the gateway for much of Asia’s international trade, is a prime example. Hong Kong International Airport has been in operation since 1998 and has since become the world’s biggest cargo gateway, as well as serving a huge number of passengers each year. In operation 24 hours a day, the airport has 100 airlines using it and flies to more than 180 cities. But it isn’t merely a stop-off, it’s a destination in itself. Remarkably, it boasts its own nine-hole golf course for those desperate for a quick swing between flights. For younger travellers, there is the PlayStation Gateway, where Sony’s consoles are available to gaming enthusiasts. Film buffs can treat themselves to the stunning 4D extreme cinema that not only provides crystal clear 3D films, but also physical effects that immerse the viewer in the movie. Foodies can even enjoy the taste of traditional Chinese street food at the Tian Xia Dumpling bar.

Another example of Asia’s innovative approach to air travel is found in Singapore. Singapore Changi Airport has repeatedly been voted one of the world’s best airports since it began operations in 1981. The airport is hugely important to Singapore’s economy – it employs more than 28,000 people and accounts for around $3.6bn in economic output. One of the busiest airports in the world – it saw 53.1 million passengers pass through in 2013 – Singapore Changi has dedicated considerable resources towards ensuring visitors’ stays are as enjoyable as possible. While most airports litter their terminals with shops and disappointing food outlets, Singapore Changi believes travellers would rather experience a more natural environment. It houses an Enchanted Garden, where lights and sounds respond to people  as they move through it, as well as a breathtaking 27-foot waterfall, a live butterfly garden, a koi pond and lots of carnivorous plants (thankfully sectioned off from humans). Alongside these environmental delights are the traditional shopping arcades, but also a luxury spa and cinema. Hungry and thirsty travellers can enjoy Singaporean-themed restaurants, Cantonese-style cooking and many drinking establishments.

While it’s not the biggest airport in the world, Las Vegas’ principal airport – McCarran International Airport – is one of the most individual. Located just five miles outside America’s ‘Sin City’, McCarran International has tried to capture some Las Vegas notoriety. The airport has more than 1,234 slot machines throughout its terminals, offering those lucky enough not to have lost their fortunes at the city’s casinos a chance to do so just before they fly home. People passing through can enjoy a brief sense of what it’s like to gamble away their holiday money without actually setting foot in Las Vegas. The different lounges available include a VIP lounge for first class customers, and standard lounges that offer complimentary food and drink to paying guests. In 2013, American Express opened its Centurion Lounge, which is exclusive to its customers. While it certainly features many of the gambling opportunities that Vegas has to offer, the airport has also acted as a platform for a good deal of public art – including murals, and steel and glass sculptures, some of which were made by locals.