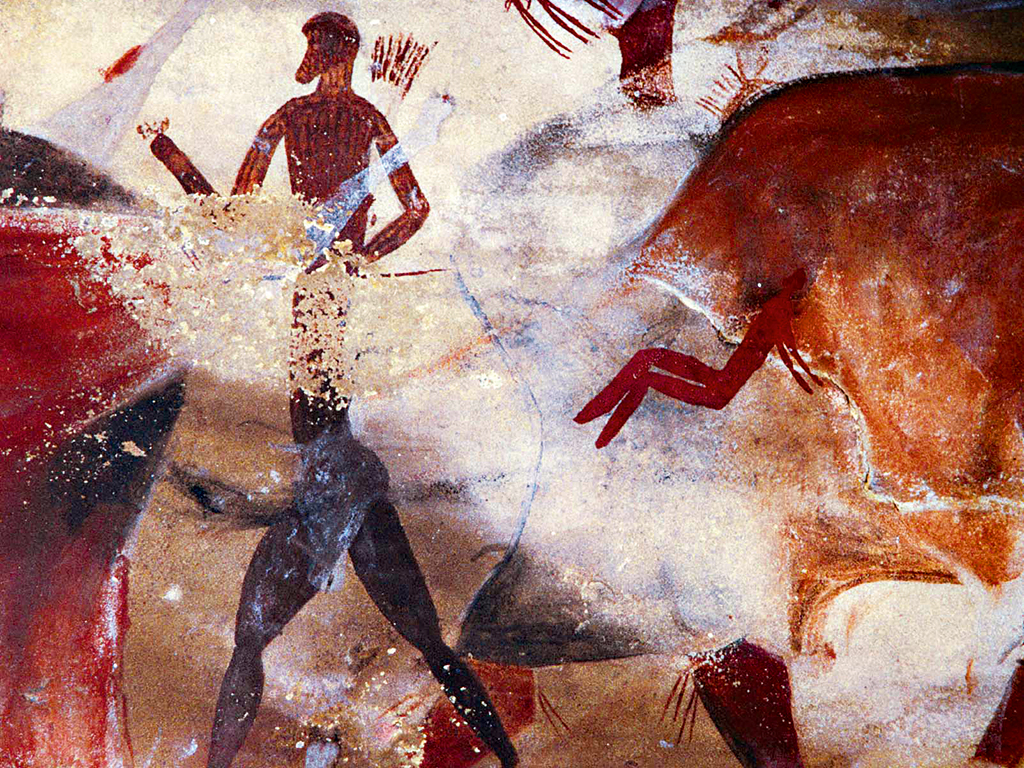 Detail from a complex panel of San/Bushman paintings on the roof of a cave in South Africa's Drakensberg mountains. The paintings may have been made at least 2,000 years ago. The images are typical of scenes involving shamanism

Carved into the sides of a boulder in the middle of the desert in southeastern Algeria is one of the most unusual sights on earth. At first glance the rounded outlines appear to be natural patterns on the side of a boulder, but when the light casts the right shadows, a much more intricate shape is disclosed. Taking a couple of steps back will reveal the uneven stones are not that at all, but the figure of a life-size giraffe, carved by hand onto the rocky surface. One main figure dominates what is evidently a landscape image, but the side of Big Cow Rock is entirely covered in these etchings, some larger than life and clear, some smaller and almost faded.

“The biggest giraffe measured 27ft from its muzzle to its rear hoof, the single biggest rock art image on the continent, if not in the world. It was absolutely staggering, the scale of it and how beautifully it was done. Probably eight or nine thousand years old,” says David Coulson, the photographer and African rock art specialist behind the discovery.

He describes the epic journey across the desert as casually as if he were recounting lunch plans. “This Tuareg friend got in touch and said I might be interested to know that there were even bigger giraffes in southeastern Algeria and we were a bit incredulous. Knowing him as well as I do, I also knew that he wasn’t a bullshitter, so when we went to Niger in 2000 we saw an opportunity. ‘Okay, well we’ve got two weeks,’ and this Tuareg friend came down with his vehicle, and on this occasion exceptionally we only used one vehicle and we just did a 2,000-mile dash, a thousand miles there and a thousand miles back across the desert. When we got to these mountains we continued by camel and went and found this remote place where there was an 1,100sq ft panel with nine running giraffes.”

Coulson is the founder of Africa-based Trust for African Rock Art (TARA), a self-funded organisation that works to find, document and – where possible – preserve the many types of rock art that survive up and down the African continent. Since its inception in 1996, Coulson and his team of African and international professionals have worked tirelessly across 20 countries to make this ancient art form more accessible and better known. It is not a job for the faint-hearted; part explorer, part academic and full-time photographer, Coulson has a rambunctious enthusiasm for his role – and good thing, too, as most people would balk at the prospect of a 2,000 mile off-road journey through the Sahara.

“In one famous case in Kenya, in about 1999 or 2000, I had seen a very early report that talked about rock art on an island on Lake Victoria in Kenya waters, but the island was huge, and there was just this spot on the island where it said, ‘Rock art reported here,’ and that was all. I literally went in a boat around the island, stopping at villages, drawing on the back of an envelope the sort of art that I expected to see. Eventually some younger guy came out and said, ‘Yes, I’ve seen something like that,’ and that’s how it all began.”

Mounting challenges
TARA is a labour of love. Since 1996, Coulson has worked on the project full-time, travelling hundreds of thousands of miles, camping out in the desert and watching the sky for the perfect light to capture the most important images. “It’s a challenge but it’s something I love to do, and it’s something that before I came along, not many people had really done or knew how to do it, to actually record these wonderful images in context,” he explains. “Because before, only scientists and academics had recorded these sites and had just done close-ups of the art, not showing the fact that they are in some of the most spectacular landscapes. Again, it’s not just because they’re spectacular, it’s because rock art is part of the landscape. Landscapes are very important and so recording the art within the context of the landscape is very, very important. The whole context also includes local people, and includes all the archaeological context, i.e. whatever has been left there and so on.”

Though TARA has partnered with National Geographic and the Smithsonian Museum before, it has recently announced a joint project with the British Museum that will see many of the organisation’s aims met. With the Arcadia Fund, a charity that works to protect endangered culture and nature, the museum will digitise and store copies of all of Coulson’s archive. The 25,000 images will be made available to the general public for free for the first time ever, through an open-source website. “Right from the get go, one of the most important things we all recognised was awareness, because we could see clearly – and it’s still the case in many areas – that ignorance is one of the greatest threats. People simply were not aware that this art existed, what it was, what it signified, how old it was, how it was threatened and how serious that perhaps was. All of that was very much part of our mission – it still is.”

Common history
TARA’s and Coulson’s collection is of vital anthropological and scientific importance. Not only is it vast, but it also covers a variety of regions, cultures and different types of art – from engravings to paintings. And no one has more background knowledge and information than Coulson, who has been personally involved with finding and documenting of all the sites. For example, in Uganda a few years ago, Coulson remembers: “We found something so totally different, that we’ve never seen anything else [like it]. I know that there must be – you never find something in isolation, so there must be more sites like that, but they haven’t been found yet.”

Though the preservation aspect of TARA and Coulson’s work is vitally important, it is also a matter of discovering the roots of humanity. Coulson is thoughtful as he points out that all of humankind originated there, in Africa, and there is the distinct impression in the air that his work is as much about finding a place in the endless string of history as it is about preserving those ideas for the future. In many ways, the rocks that Coulson has dedicated his life to preserving and documenting are the evidence of our common history, the starting point of this unifying thread that links every human on earth: art.