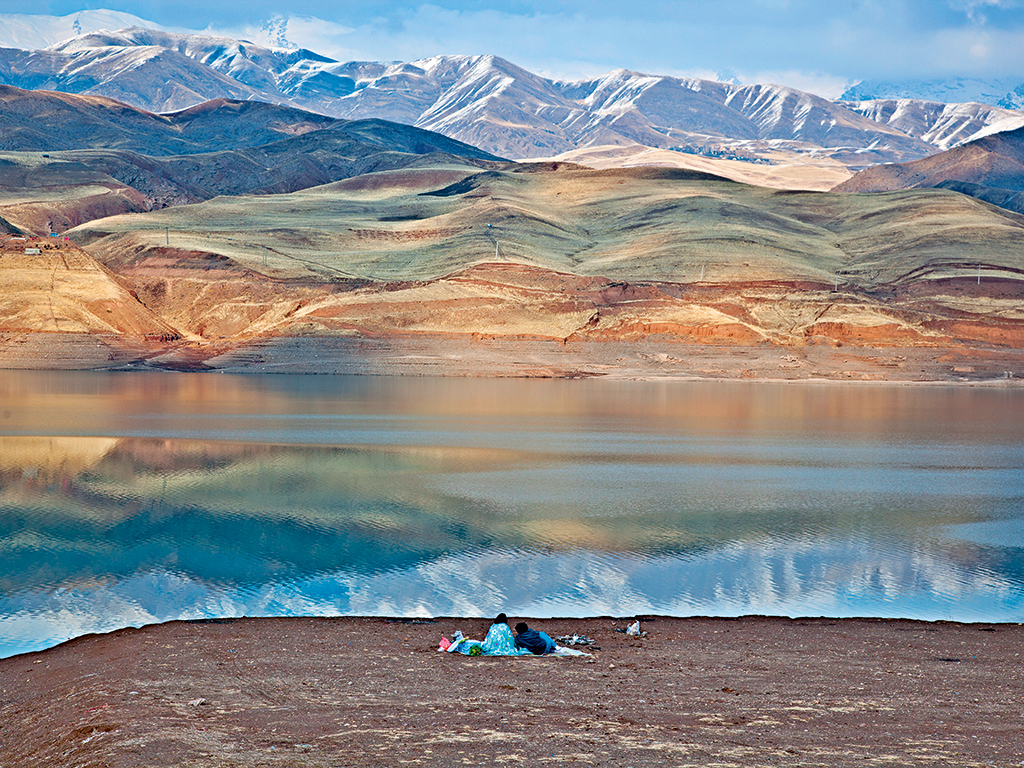 A lake at Taleqan Dam in the country's Alborz Province. British-born Iranian Cyrus Massoudi's family was one of millions to flee the country during the Islamic Revolution in 1979, but the author has since rediscovered its beauty

Retracing your cultural roots is something many people feel a strong desire to do at some point in their lives. However, for some, discovering more about where they come from can be made all the more difficult if their family has uprooted and moved to another country – the course taken by many families in Iran over 30 years ago.

The Islamic Revolution of Iran in 1979 overthrew the ruling Pahlavi dynasty and displaced millions of Iranian citizens from their homes, scattering them across the world. For many Iranian children of the displaced, the idea of Iran was perhaps an alien concept – a distant, faraway land. Portrayed as full of flag-burning enemies of the West, Iran could not seem more different from some of the countries that its exiled citizens moved to after the revolution.

One such exile was author Cyrus Massoudi, whose family left Iran after the revolution and settled in Britain. Raised in London during the 1980s, Massoudi experienced a traditional British education, but never quite felt fully British, describing himself as “British, but of Iranian origin”. It wasn’t until he reached his 20s that the urge to explore his heritage led to him packing his bags and journeying to a country he had heard much about, but never actually been to. It was a trip that would result in four years of travel across the country, uncovering the many different facets of Iranian culture, including its rich artistic and intellectual contributions to the world, as well as a very different country to the one that is often portrayed in the Western media.

A country long out in the geo-political cold, Iran has been a troublesome thorn in the side of Western diplomacy in the Middle East for more than 30 years. However, with a supposedly moderate new President and a softening stance towards the West, the attention of the world has turned towards a country with both huge economic potential and rich cultural history, which has not seen the sort of attention it deserves. Business Destinations spoke to Massoudi about his debut book Land of the Turquoise Mountains, published in September, and about his experiences as an Iranian born in exile, returning home to his roots, and what role the country will play in an ever-changing world.

As an English-born Iranian, did you always feel a desire to retrace your family steps back to Iran?
Even though I was brought up speaking Persian with my family and celebrating Iranian New Year instead of Christmas, I considered Iran to be where my parents were from and all of the customs that accompany Nowrouz (Iranian New Year) to be the bizarre rituals they brought with them from some kind of distant, mythical land. It was only in my student days that I became curious about the endless news reports and controversies surrounding Iran. The discordant voices of the Iranian diaspora, the Western media and those coming out of the country itself just seemed confusing and contradictory. I soon realised that the only way to answer all the questions I had, to try and make sense of these contradictions was to go and see the place for myself.

How were you treated when you got there? Did people mistrust you as an outsider or welcome you as one of their own?
The mistrust was predominantly from the authorities, unsure what to make of a British-Iranian writer with a questionable grasp of Persian turning up at checkpoints in politically sensitive parts of the country very few tourists ever go to. The people themselves were amazingly welcoming. The hospitality culture can sometimes seem a touch cumbersome but it is guaranteed to make a lasting impression on any visitor to Iran. As a gharbzadeh – or Westernised – Iranian, I was expecting a certain amount of suspicion and hostility. Instead, I was taken aback by the amount of goodwill and support for my efforts to try and connect with my country of origin and help build trust and understanding between our two estranged cultures.

What were the most interesting parts of your travels to Iran?
The antiquity and scale of sites like Persepolis and Chogha Zanbil were incredible to witness first hand, but discovering all the different ethnicities that make up Iran was probably the most intriguing part of my travels. From Azeri Turks in the north-west to Baluchis in the south-east, each ethnic group is clearly defined by their own distinctive cultural traits. It was also great to see the nomadic existence of the Qashqai and Bakhtiari tribes still enduring against all the odds. Iran’s natural diversity also came as a great surprise, boasting everything from snow-capped mountains and jungles to deserts and salt plains.

Do people in the West tend to neglect the cultural contributions Iran/Persia have made to the world throughout history? What are they?
Iran’s contributions are too many to list – entire books have been written on the subject – and they have definitely been overlooked until very recently. For centuries Iran’s age-old adversaries, the Greeks, wrote the accepted version of the world’s ancient history. Iranians were more often than not portrayed as ruthless barbarians hell-bent on the destruction of the Western world. Recently much has been made of The Cyrus Cylinder being the supposed ‘first charter of human rights’, but this is just one celebrated example of the tolerance and social justice with which the Achaemenian dynasty ruled the first great world empire.

How has the country changed in the years since you did your trip?
The disquiet that followed the disputed 2009 re-election of Mahmoud Ahmadinejad brought out the fractious divisions within the country and the subsequent 2013 election of the reformist President Rouhani demonstrated the strong desire of a majority – though not as large as some would have you believe – for a more progressive outlook, one that takes a more pragmatic approach to foreign relations and encourages stability and economic growth.

Do you think Iran’s seemingly better relations with the West will continue, and can the country play an important role on the international stage in the future?
They need to. Recent developments in Syria, Iraq and Palestine have all increased the need for Iran to take an active role in the region. For the first time in decades, Iran and the West share a similar objective in stopping the spread of ISIS. This has given the Shi’i regime the perfect opportunity to prove their genuine intentions in rebuilding bridges, resolving the nuclear issue and being brought in from the cold. A responsible Iran acting in conjunction with Western governments is a fundamental first step in working towards stabilising the Middle East.