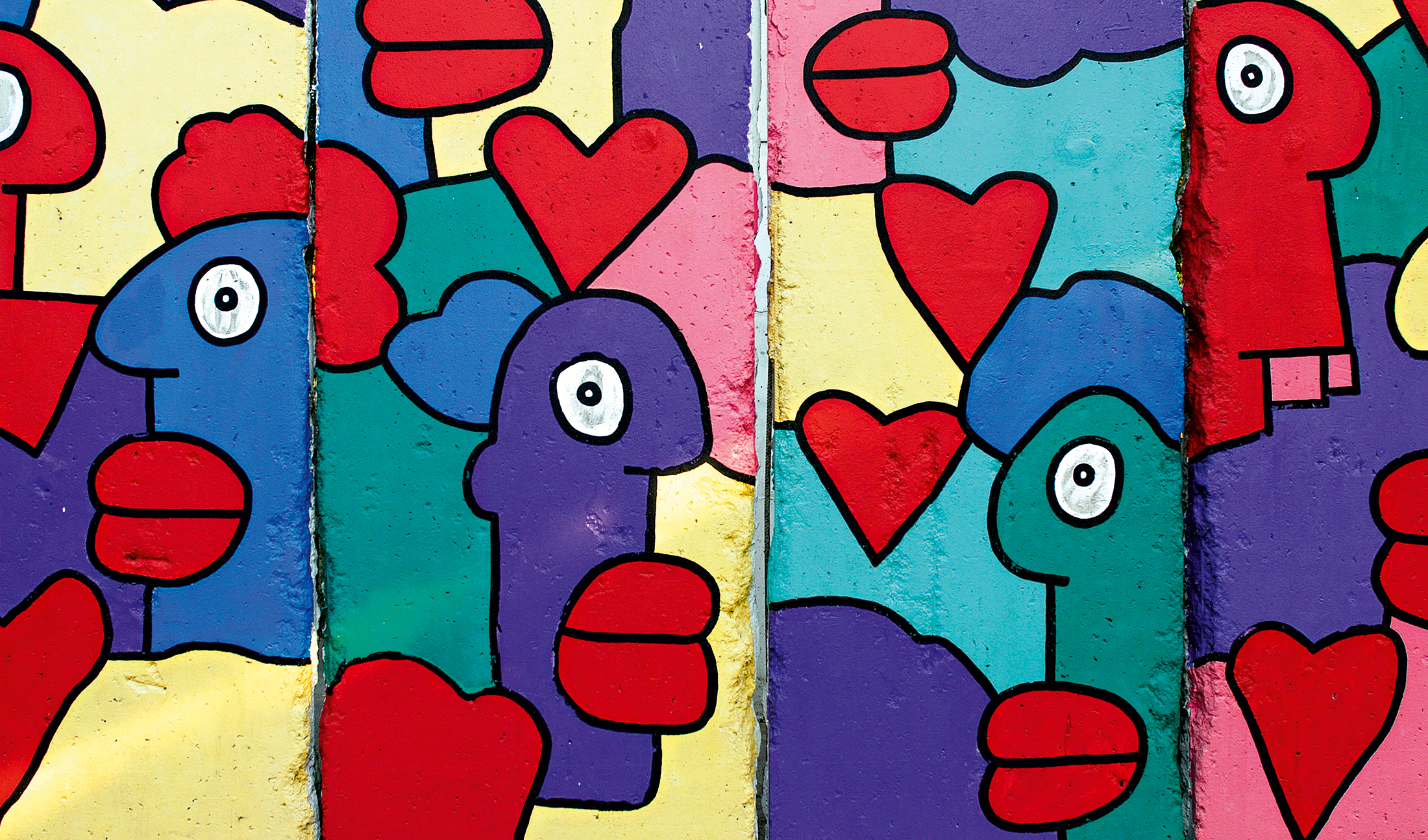 This year has been hailed as super-gedenkjahr – the year of commemoration. It’s 100 years since the outbreak of World War One, 75 since the second conflict began, and a quarter of a century since the fall of the Berlin Wall. With the anniversary of its toppling on November 9, 2014, Germany’s wall has not been forgotten by a once-divided nation.

Reunited in 1990, the city stands at the centre of European politics, business and culture. Its liberal outlook, healthy economy and plethora of attractions make it an enticing destination for business jaunts and weekend getaways. Among its top attractions are memorials, museums and Soviet-era sites honouring a fractured past. These dwindle as the country’s rapid growth demands they are duly replaced with housing and infrastructure. Yet some survive to echo the regimes of the past. To paraphrase author Clive Barker: it takes a nation with real heart to make beauty of that which makes us weep.

Confronting the past has enabled Berlin to attract millions of tourists

Rewind the clock 69 years and the capital was in ruins. Allied bombings and the Battle of Berlin had reduced it to a wasteland of brick, steel and concrete. These hardships did not end with Hitler’s fall either. For the next 44 years Germany was unstable, physically divided by ideological conflict.

The division happened in August 1961. It was a profound shock to Germans when borders were finally sealed, with armed soldiers patrolling land they used to walk freely. Rumours hinted at a separation of the state but this was discarded as hearsay. But as the relationship between the Allied Forces and the Soviet Union began to sour, Germany was divided. It began to represent two polarised political beliefs: East versus West was democracy against communism.

It was clear which side was better off as living conditions quickly polarised. West Germany – with the help of the Allied Forces – experienced huge financial growth dubbed the ‘economic miracle’. Citizens could buy luxury goods, took holidays and reaped the benefits of a fruitful society. The opposite was true for the east. The Soviet Union, viewing it as a spoil of war, pilfered industrial equipment and other valuable assets. The economy stagnated and personal freedoms were restricted. The oppressive concrete wall stretched 140km across the face of Germany, protruding 12ft into the air. It cut Berlin in half, encircling western city provinces and separating family and friends without warning. For 28 years Germans in the east were effectively trapped.

To mark the historic super-gedenkjahr, Berlin has organised a number of dynamic exhibitions, concerts and performances

1914-1918. The First World War
Deutches Historisches Museum, until November 30
The First World War was a tragedy, resulting in a harrowing loss of life as it swept through Europe and beyond. This exhibition, at the German Historical Museum, explores the war and its wide-ranging consequences. Focusing on 14 important locations, from the battlefields of Verdun and Galipoli, to the political centres of Petrograd and Berlin, each place helps weave the story of the war. Images and artefacts are complemented by letters and biographies of those that lived through the conflict.

Berliner Philharmoniker Orchestra
Berliner Philharmonie
Renowned for its acoustics and striking architecture, The Berliner Philharmonie is the best music venue in the city. It is home to the Berlin Philharmonic Orchestra and in November it will host a three-date concert to honour the 25th anniversary of the fall of the Berlin Wall. Conducted by Sir Simon Rattle, the concert will features works by György Kurtág, Helmut Lacjenmann and Ludvig van Beethoven. Tickets to the show cost between €33 and €94 and go on sale in September.

West: Berlin, an island in search of mainland
Stiftung Stadtmuseum Berlin
West Berlin’s history is often neglected in favour of the GDR’s darker past. This show details the lifestyle of Berliners on the democratic side of the wall. West Berlin was an enclave surrounded by East Germany and this dynamic exhibition uses photography and anecdotes to explain life in what became known as the ‘Island of Freedom’. Visitors are invited to form an opinion on the city’s culture, economy and power struggles. Ephraim-Palais, a 1760s rococo building, will host the exhibition.

Berlin Art Week
Galleries across the city
Kulturprojekte Berlin brings together the Art Berlin Contemporary and Positions Berlin to create an exciting schedule of exhibitions, performances, artistic discussions, film screenings and show openings, celebrating Berlin as a centre of avant-garde creative expression. A panel of respected figures in the art world – Mathilde Ter Heijne, Kolja Reichert and Anna-Catharina Gebbers – have organised a selection of temporary projects to delight guests during the week. Buy advance tickets online at visitBerlin.de.

Better together
The fall of the wall came almost as unexpectedly as its erection had done. Communism had failed in Poland, Hungary and Czechoslovakia, and back in East Germany the end was near. On November 9, 1989, the Socialist Unity Party spokesman Günter Schabowski made this announcement: “Permanent relocations can be done through all border checkpoints between the GDR (East Germany) into the FRG (West Germany) or West Berlin.”

The East was free. The wall was battered down. Westerners greeted Eastern compatriots with flowers and champagne as they danced together to celebrate a reclaimed freedom and a country reborn. On October 3, 1990, less than 12 months after the fall of the wall, East and West officially merged. A modern, unified Germany stood independently for the first time since the fall of the Third Reich.

Germany has thrived since reunification. It’s an undisputed world power and plays an instrumental role in EU politics. It also has the happiest people in Europe, according to a survey by the German Economic Institute. Still, it has not forgotten the tumultuous path preceding it and commemorating its history has had economic perks. According to Visit Berlin nearly 30 million tourists flocked to the capital spending over $10.8bn in 2013. And millions of them visited the wall.

What remains of it is at the Berlin Wall Memorial on Bernauer Strasse. Sections of the wall run for a kilometre along the border strip and vertical iron poles, jutting out like prison bars, replace missing sections. The artistic transformation is stirring and complemented by a 60m section of no man’s land. Kohlhoff & Kohlhoff, the architects behind the impressive memorial, wanted to integrate as much of the remaining evidence as possible to create an accurate, yet artistic, representation. The revamped no man’s land and old guard tower add to the sense of oppression that border fortifications brought about in East-West Berlin.

Learning from the past
Behind the oppression lurked the Stasi. Officially known as the Ministry of State Security, the secret police were among the most feared and hated in Germany. Their huge 1.1 million sq ft HQ in Lichtenberg, now the Stasi Museum, is worth a visit. It was stormed in 1990 by critics of the regime but the offices of senior ministers, including Stasi chief Erich Mielke, were hermetically sealed soon after. As a result much of the decor is unchanged. Mielke’s office retains its original desk and blue-cushioned chairs. The three-storey museum also has a huge collection of espionage gear used to gather information from enemies of the Soviet bloc. Look out for the spy camera disguised as a tree.

These headquarters are not the only former Stasi site with a new use. The Berlin-Hohenschönhausen Memorial is intrinsically linked to political oppression in East Germany and, unlike the Stasi Museum, was never stormed after the wall came down. The secret police took control of the former prison in 1951, using it as a base for operations suppressing political and artistic expression. The list of atrocities that reportedly happened inside its ‘tiger cages’ is long. Rumour and eyewitness accounts tell of prisoners being used for labour and subjected to psychological intimidation. Unfortunately, the Stasi allegedly burnt evidence of many atrocities. Former inmates founded the Hohenschönhausen Memorial in 1990, had it listed as a historical site in 1992, and opened its secretive doors to the world in 1994.

Chancellor Angela Merkel was at the sauna when thousands of her countrymen breached the Berlin Wall. In a recent interview, the German leader claimed she missed the historic day after refusing to change her schedule.

Another site that illuminates oppression is the Topographie des Terrors, a wartime museum documenting the rise and rule of the Third Reich. From 1933 to 1945 the site was the headquarters of the Gestapo and the SS, representing the iron fist of Nazi repression. Hitler had 39 prison cells built underneath so he could detain inmates of special interest to the Gestapo. On the Prinz-Albrecht-Strasse, the prison became synonymous with cruelty and torture. For many, the only option was suicide.

Left uninhabited and edging into dereliction until after the wall came down, the grey, rectangular building became a permanent museum in 1987. Indoor and outdoor galleries provide colourful detail of a turbulent history in a concise and informative way. It is open 361 days a year and offers an unparalleled understanding of modern German history.

From here it’s a four-minute walk to Checkpoint Charlie, the infamous border crossing in Berlin. A major tourist attraction today, the tiny checkpoint became an icon of the Cold War after a tense standoff between Soviet and US tanks. Since then, the checkpoint has appeared in numerous spy movies, including the James Bond escapade Octopussy. An open-air exhibition was opened along the adjacent streets of Friedrichstrasse and Zimmerstrasse in 2006. Plaques on the walls describe escape attempts and the checkpoint’s significance. It resembles more of a garden shed today, but Checkpoint Charlie – or Grenzübergangsstelle, as East Germans called it – continues to thrill. Actors in military dress stand guard at the sentry position and tourists can pose for photos with them. It’s a little tacky, but an uplifting experience after the sobering Topography of Terror.

Another lighter, but very informative, offering is the riverside DDR Museum, just a bridge away from Berlin’s Museum Island. Focusing on the material culture of East Berlin, interactive exhibitions invite visitors to get behind the wheel of a GDR car, rummage in the wardrobe of a GDR worker, and settle down on a sofa to watch some GDR television. And when you’ve worked up an appetite, the museum’s restaurant Domklause serves authentic GDR cuisine – from ‘broiler’ to jägerschnitzel.

November remembrance
It is always a good time to visit Berlin, but November 2014 will be particularly interesting. To mark the 25th anniversary of the wall’s destruction, Berliners have planned a number of commemorative events during the first week of the month. Photographic and film screenings, talks, tours and exhibitions are also scheduled for the weekend to offer a retrospective on life in the GDR.

As a symbol of ‘hope to worlds without walls’, a 19km stretch of illuminated helium balloons will run through Berlin as a poignant reminder of what used to stand there. The dazzling installation will be visible from space, providing the sky is clear, claims Visit Berlin. German authorities may secretly hope these commemorative events will unite a country still questioning the success of its reunification. The nation can certainly take pride in facing its history head-on. Confronting the past has enabled Berlin to attract millions of tourists. More importantly, Germany has created insight and beauty from something sinister. It’s a lesson the world can learn from.