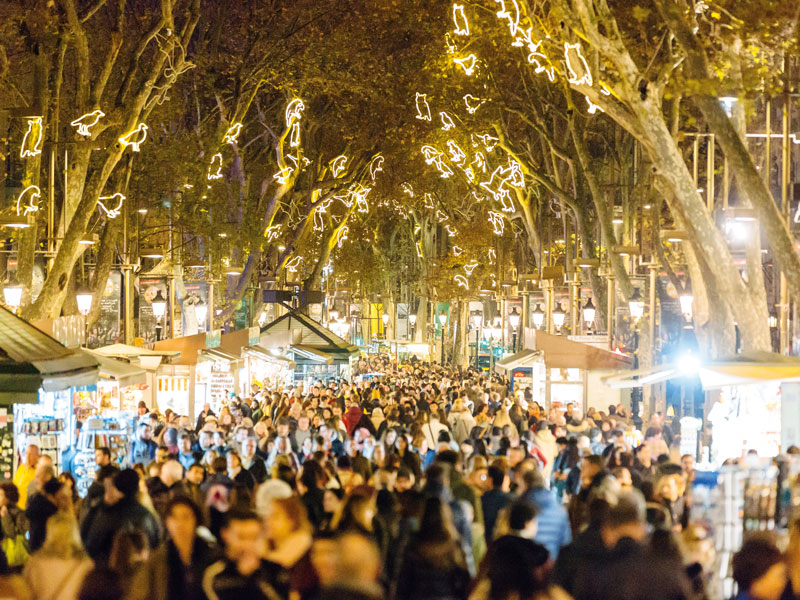 Throngs of people at the La Rambla Christmas market in Barcelona. Last summer, anti-tourism activists slashed the tyres of tour buses in the city in protest of increasing tourist numbers

Rising house prices, tacky souvenirs and litter: for some, these are tourism’s defining characteristics. For others, the industry provides an economic lifeline, creating direct and indirect employment for themselves and many others.

Last year, the issue of ‘overtourism’ came to a head in many European cities, as local resentment turned into public protest. Although the competing interests of tourists and residents have never sat completely comfortably alongside one another, tensions appear to be rising.

Low-cost flights, a burgeoning global middle class and border-free travel have resulted in a sharp growth in tourism figures, but not everyone is happy about it.

Doubled-edged sword
There is no doubt that the tourism industry has provided huge benefits to many places. In 2016, overnight international visitors alone spent $12bn while staying in Paris. In Istanbul, tourism helped pay for the restoration of the Hagia Sophia and the Blue Mosque through ticket sales.

Tourism may generate extra revenue, but it is not without its problems. Last year, 2,000 Venetians marched through the streets in protest against increased pollution and rising rents caused by tourism.

In Barcelona, youth members of the local political group Popular Unity Candidacy were witnessed slashing the tyres of a tour bus. Olivia Ruggles-Brise, Policy and Communications Director at the World Travel and Tourism Council, believes that the factors driving the rise in anti-tourist attitudes vary from place to place, but that issues can often be broken down into five key areas.

By gaining a real-time insight into which sights are most congested and at what times, tourism officials can offer alternative destinations

“The five problems we identified were: alienation of the local community, infrastructure problems, poor tourist experience, environmental degradation and threats to heritage and culture,” Ruggles-Brise explained. “I think it’s important to actually identify the problem and try to solve it, rather than
just trying to stop all tourists.”

The tourism sector is worth almost $7.9trn to the global economy. If cities were to turn their backs on this money, it would not only prevent visitors from experiencing new places and cultures, but it would have a devastating impact on local residents too.

The protests that took place last summer across European cities demonstrated that overtourism is an emotive subject, but stemming the anti-tourism wave will require long-term planning, not knee-jerk reactions.

All-inclusive
If cities are to keep the benefits of tourism without incurring the drawbacks, then some innovative thinking may be required. In Amsterdam, a city that welcomes more than 14 million visitors annually, tourist data is being used to combat congestion issues.

By gaining a real-time insight into which sights are most congested and at what times, tourism officials can offer alternative destinations, resulting in a more pleasant experience for locals and visitors alike. Better visibility, Ruggles-Brise said, helps popular tourist destinations to get to grips with what is a “highly nuanced problem”.

Other cities have taken more drastic measures to tackle overtourism. After UNESCO threatened to take away Dubrovnik’s World Heritage status, the Croatian city decided to drastically reduce the number of visiting cruise ships. Mayor Mato Franković admitted that it could cost Dubrovnik as much as “a million euros”, but that the long-term quality of life in the city was more important.

Overtourism is not purely a numbers game, however. Badly behaved tourists have forced the island resort of Hvar to introduce strict fines for unwelcome behaviour – as much as €600 ($750) for walking around the historic centre in a swimsuit. Similarly, last year the World Tourism Organisation launched its ‘Travel.Enjoy.Respect’ campaign to promote sustainable tourism.

Whichever methods cities choose to employ, Ruggles-Brise believes it is vital to adopt a “holistic approach that engages all stakeholders”. Governments and local authorities cannot tackle the problems of overtourism alone: private corporations, local communities and tourists themselves must also be consulted.

That is the only way to ensure that Barcelona, Venice, Amsterdam and other cities across the world are not just fantastic places to visit, but to live as well.