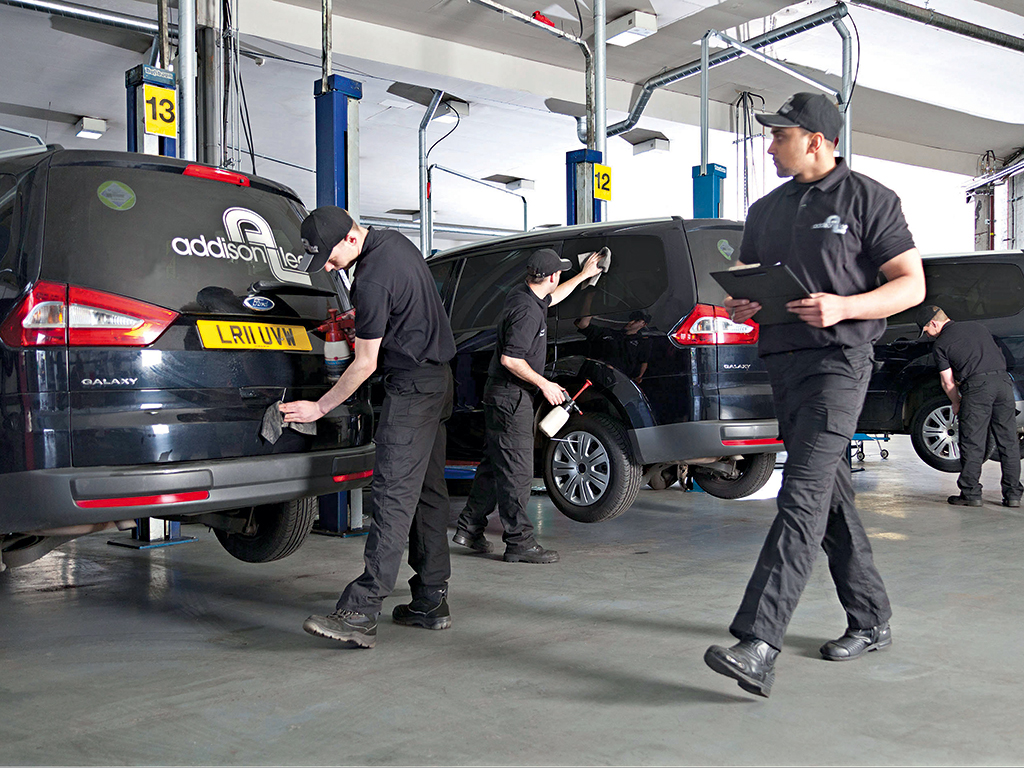 Addison Lee takes pride in its well-presented fleet. The company is looking to expand its presence internationally

We’re with new Chairman Colin Tenwick at Addison Lee’s main control room near Euston Station, standing opposite a 20ft-tall digital road map of London. On the map are several thousand coloured blobs, representing the live fleet position. The blobs track gently along the roads, occasionally changing colour to show their operational status. Blue indicates ‘on way to passenger’, red means ‘passenger on board’, green is for an empty car, and cyan shows ‘driver going home’.

Surrounding the giant map are banks of workstations manned by controllers who monitor the allocation of bookings. The process is automated but occasionally, smart monitoring systems will prompt a controller to intervene and rectify an anomaly – or even call a driver if they are having difficulty making contact at the pick-up address. Considering the control room handles over 19 million passengers, it’s a surprisingly tranquil place.

A history of firsts

Addison Lee has been a pioneer in minicab technology for over two decades now, staying ahead of its competitors with time-saving, mile-reducing and customer-friendly innovations

First to track its fleet of minicabs by GPS

Developed the ‘going home’ button, allocating drivers bookings that take them closer and closer to home, saving thousands of miles of unecessary travel every day

Technology for growth
“Addison Lee has always seen technology as a pillar for growth and its investment in booking and fleet management technology is a major contributor to the business growing year-on-year by an average of 20 percent,” says Tenwick. “In 2013, the private equity company Carlyle became the majority shareholder in Addison Lee and I joined as a director in April 2014 and became Chairman in June 2014.”

“Taking stock of the technology history we rediscovered quite a few ‘technology’ firsts. For instance, in 2001 Addison Lee was the first private hire company in the world to track cars via GPS. It was also the first to send booking confirmation via SMS, to offer booking online, to create a booking app, and to install wi-fi into private hire cars,” says Tenwick.

“But the most significant piece of technology is the auto-allocator which was built in-house. The allocator considers up to 100 vehicles, then plots the route of the nine closest cars to the pick-up point and calculates which can get there the fastest. There is a whole team of programmers and controllers working on the allocator and small tweaks to the algorithms can make a big difference when scaled up. For example, a few years ago a ‘going home’ function was introduced. When a driver chooses to go home the allocator offers bookings that will take them progressively closer to their home address. This function, scaled up, has saved 4,000 miles of wasted travel every day across the fleet.”

Exciting expansion
So what’s the next step for Addison Lee? “Well I’m here to assist in the development and growth of strategic hubs in major global cities,” says Tenwick. “Over the years Addison Lee has established a well-deserved reputation as best in class for corporate travel and what we’re seeing now is our London-based multi-national clients looking to us to provide the same service in other major cities.

“We’ll do this through a combination of technology-led service provision and strategic partnerships with other providers abroad. Right now, we already offer ground transport in 350 cities worldwide using carefully selected affiliates. We’ll be increasing our affiliate network significantly. We’re even managing bookings for a fleet in New York taking local bookings from New Yorkers as well as bookings from those in London who require a car in New York on their business trip. This is our first strategic hub where we are providing technology-led solutions for both corporate clients and fleet operators.

“In July, Addison Lee announced a strategic partnership with Concur, the leading provider of spend management solutions in the world. Concur manages 120,000 bookings a day through its Travel platform, and travellers can use it to book with Addison Lee. Bookings will automatically generate an e-receipt so travellers won’t need to collect a written receipt after their journey. This integration provides finance teams with real-time visibility into their ground transportation costs.

“Addison Lee is also in the process of providing several international companies with bespoke platforms to give their employees a full, truly global, ground transport service.”