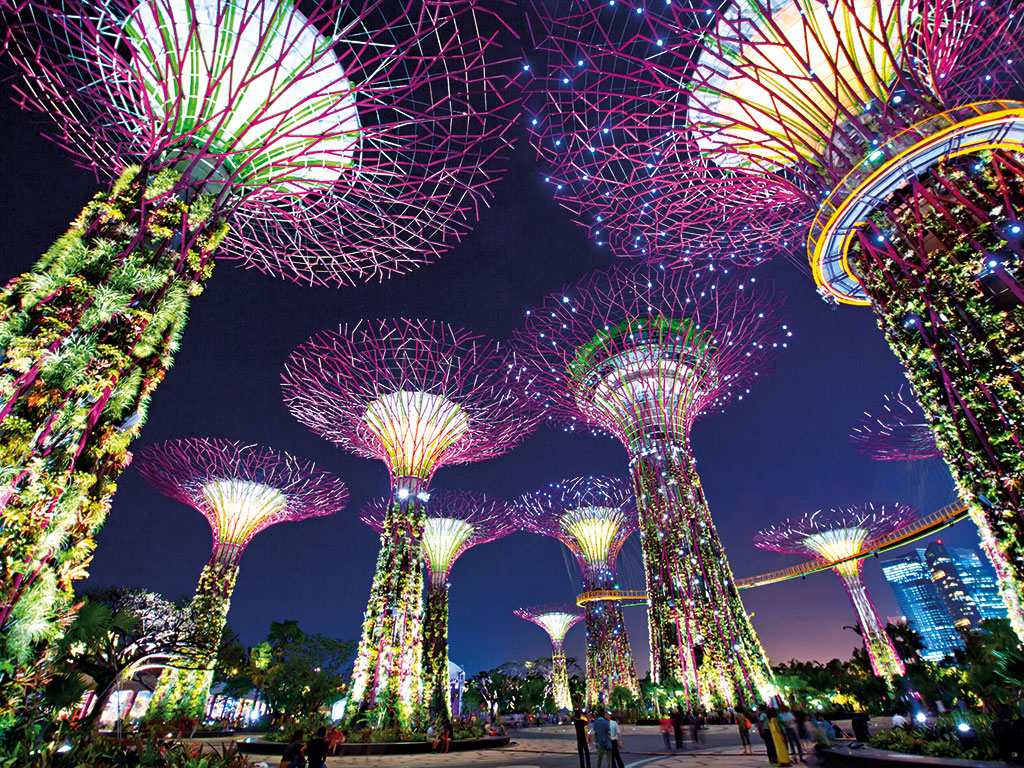 The Supertree Grove at Singapore's Gardens by the Bay. The country has become a favourite with expats

Although the phenomenon of travelling far and wide in order to secure a better financial future for oneself still occurs, people are now moving abroad for various other reasons as well.

According to HSBC’s recent Expat Explorer analysis, which surveyed 21,950 expats from around the world, 37 percent moved abroad to experience new challenges, and 37 percent did so to improve their quality of life. The research also found that earning more money and career progression are no longer the two dominant factors driving the expat community.

“There seems to be a definite trend of people choosing to move abroad for very personal reasons and to become expats in a wider sense of the word”, said Malte Zeeck, Founder and Co-CEO of InterNations, the largest global network and information site for expats. “Even career motivations are more individualist nowadays.”

The city-state has become an Asian hub for a number of global industries, including finance, communications and shipping

Of the most popular cities for expats to move to – a list that includes London, Hong Kong and Dubai – Singapore was rated as the world’s best in the report’s overall league table. Not only does the city-state boast a stable economy, it has excellent career opportunities, a safe environment for children to grow up in and world-class healthcare facilities. In fact, 67 percent of those surveyed said that Singapore provided them with a better way of life than they experienced at home.

Better quality of life
Fast-flowing traffic, thanks to the limited number of cars on the road, sparkling clean streets and vigilant renovations provide an idyllic urban space for residents in Singapore, while architectural icons, museums, art spaces and numerous parks add further appeal to the modern city. Known for low levels of crime, the streets of Singapore are extremely safe, which – together with a supply of leading international schools and healthcare facilities – make the city an ideal place for expats to raise children. Of those with families, 65 percent agreed that their children’s wellbeing had improved since moving to the Southeast Asian island.

Naturally, attractive employment opportunities must be present for any destination to attract expats and their families in the first place, and it is in this particular field that Singapore excels: the city-state has a reputation for attracting top talent, with no short supply of leading industries for individuals to excel in. The Expat Explorer report found that 28 percent of expats in Singapore earn more than $200,000 per annum, compared with only 13 percent who do so globally. Furthermore, over half believe that they learn more new skills in their Singapore-based careers than they do back home.

Helping to entice more top talent is the expediency with which individuals can make the move to Singapore. With a multitude of employment categories and a streamlined system in place to simplify the process, it is relatively easy to obtain a work permit, known as the ‘employment pass’. Furthermore, the extremely large expat community, which comprises close to a quarter of the entire population, makes establishing community ties somewhat less formidable than elsewhere.

“Moreover, when one takes a look at the ease of settling in, respondents find it comparatively easy to get used to the local culture and feel welcome in their new home. They also appreciate the lack of a language barrier, as English is one of the official languages here”, Zeeck told Business Destinations.

A pricey trade-off
Of course, no place is a utopia, and there are some drawbacks to Singapore life. “If there is one downside to expat life there, then it’s probably the work/life balance”, according to Dean Blackburn, Head of HSBC Expat. “Only 39 percent feel this is better than at home, compared with 50 percent of expats globally.”

The cost of living is also incredibly high, from accommodation and food to luxury items – in fact, Singapore is one of the world’s most expensive cities to live in. Being so densely populated, rent varies in correlation with proximity to the centre: according to InterNations, a three-bedroom apartment can cost between SGD 3,000 and SGD 7,000 a month, (around $2,100 and $5,000 respectively). Many expats instead opt for luxury condominiums outside the centre, which can be significantly more affordable.

What’s more, owning real estate in the country is particularly difficult, as the government hinders foreigners’ attempts to purchase properties or vacant land. Car ownership is an even pricier affair: aside from the exponential price tag of automobiles in Singapore, maintenance fees, petrol, parking and road tax are also extremely high. To discourage residents from owning a car even further, there is a mandatory 10-year permit, which comes at an eye-watering cost of $43,000.

With all of this in mind, however, it is worth noting that Singapore’s high living costs are offset by one of the lowest tax rates in the world: only when earning over $320,000 do individuals pay 20 percent in tax, while expats are exempt if they spend less than 183 days a year in Singapore. Furthermore, capital gains tax is simply nonexistent.

City of entrepreneurs
Singapore’s geographic location, coupled with its international transport infrastructure, makes it an excellent base to cover the entire region, for both companies and individuals with far-reaching ambitions. For this reason among others, the city-state has become an Asian hub for a number of global industries, » including finance, communications and shipping. “Of the expats we surveyed in Singapore, nearly a third work in banking, insurance or financial services. That reflects Singapore’s prominence as an international financial hub and also explains in part the high average incomes on offer from living there”, Blackburn told Business Destinations. The state also acts as the region’s centre for the oil industry and has invested heavily in entire districts dedicated to the field. In addition, it houses world-leading research facilities that specialise in areas such as microelectronics and biomedicine, thereby making it a mecca for STEM professionals.

Moreover, Singapore has a regulatory framework in place that enables people to start a business in the country within a matter of days. “The strong economy, the excellent transport connections and the fact that English is the language of business and bureaucracy may also make it far easier to get started in Singapore than in other destinations”, Zeeck explained. As such, business-starters surveyed in the Expat Explorer study rated Singapore’s viability for starting a business at 87 percent – the highest score across the board, followed by Dubai, Hong Kong and London. “It’s very much a sought-after destination for budding expat entrepreneurs”, said Blackburn.

As specialised industries continue to seek out the world’s best talent, making life better for expats is one sure way to draw them in. And this trend is certain to continue: “More and more countries are introducing or increasing policies to encourage the immigration of applicants with certain skill sets. This is a response to issues like occupation shortages, talent mismatch, and demographic shrinkage and more people with advanced skills and professional experience see this global fight over talent and human resources as their chance to seize”, Zeeck added. “Therefore, we assume that the importance of highly qualified labour and skilled migration is going to increase significantly in the next few years. Finaccord, for example, forecasts that the number of expats worldwide will reach around 56.8 million in 2017, as compared to 50.5 million in 2013.”

As the world becomes smaller through additional channels of communication and more affordable transportation, more people will make the life-changing decision to move away from their home country. Of the many trends of the 21st century, having greater freedom to live somewhere based upon personal preference must be one of the most fortunate.