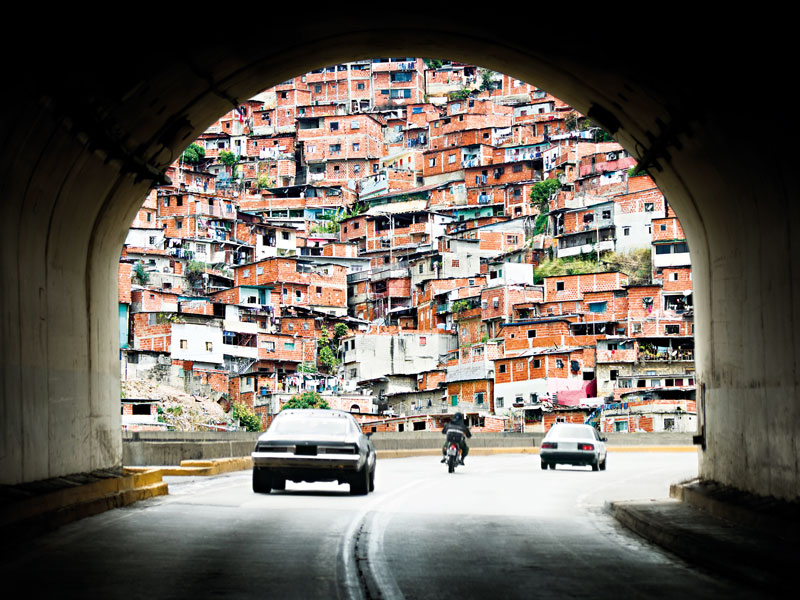 Poverty leads to architectural chaos in Caracas, the capital of Venezuela

On June 14, following a cabinet reshuffle, Marleny Contreras, Venezuela’s tourism minister, tweeted that “tourism is the oil that will never run out”. Her country’s current economic and political situation is testing that theory to its limits.

Not so long ago, Venezuela was able to attract tourists from all over the world, enticed by breathtaking natural scenery and tales of Latin American hospitality. In fact, the tourism industry generated $1bn a year for the country as recently as 2008. Things are very different now, however.

Incidents of violent crime rose steadily while Hugo Chávez held power, and things have only gotten worse under his successor Nicolás Maduro. Today, Venezuela is one of the most dangerous countries in the world, with violent crime just a part of daily life. According to the country’s Interior Ministry, a staggering 53 people a day were killed in Venezuela last year. If, as has been claimed, the government is suppressing reports of violence, then the real-life figure could be even higher.

In 2017, Venezuela was ranked second last in terms of tourist growth by the World Travel and Tourism Council, seeing even less growth than Syria

Against this violent backdrop, tourists are understandably choosing to stay away. In 2017, Venezuela was ranked second last in terms of tourist growth by the World Travel and Tourism Council, seeing even less growth than Syria.

Those tourists that are not put off by the possibility of violence may be discouraged instead by the country’s rampant inflation. With Venezuela’s political situation becoming increasingly entrenched, the likelihood of this beautiful country realising its tourism potential once more seems slim.

A tourist trap
It should be noted that, despite the fact that many governments are now advising their citizens not to travel to the country, the tourism sector in Venezuela is not non-existent. Last year, the industry directly contributed 2.3 percent towards the country’s GDP and supported 303,599 jobs. These figures, however, have experienced a marked decline from their high points in 2013 and remain far below those of other South American countries like Brazil and Argentina.

people per day were killed in Venezuela last year

The amount generated by Venezuela’s tourism industry in 2008

of Venezuelans have confidence in their domestic police force

The high level of crime, which has been rising since the 1990s, is likely the main reason for the declining tourism sector. But this, of course, does not occur in isolation, and has long-standing socioeconomic and political causes.

A dysfunctional judicial system – only 14 percent of Venezuelans have confidence in their domestic police force – means that criminals act with a sense of impunity, while ease of access to weapons and spillover effects from the drug war in neighbouring Colombia have contributed to the country’s social problems.

Daniel Clarke, the director of South American travel specialists RealWorld, believes that because Venezuela has always been a destination “off the beaten track” it has attracted visitors that are curious about the world. Unfortunately, these inquisitive travellers are also the type of people who are likely to be aware of the current turmoil in the country.

“Crime is through the roof,” Clarke explained. “It can be difficult to get hold of even basic foodstuffs, and regular protests, strikes and blockades make travel very difficult. These are all good reasons not to visit at the moment.”

Even for those tourists who are determined to visit the country, logistical issues make this a challenge. More than 15 international airlines have stopped flying to Venezuela over the past two years, with many others operating a reduced service.

Yet again, this is partly a security issue. With Caracas’ international airport in particular now seen as a high-risk area for violent crime, airlines can no longer guarantee the safety of their crew. Before suspending flights to the country in August 2017, Avianca, a Colombian airline, was forced to hire bodyguards to protect its members of staff.

Jorge Salazar-Carrillo, a professor at Florida International University, told Business Destinations that there was little chance of the country turning its failing tourism industry around. “I think the decline that we have seen since the start of this decade will continue,” he explained.

“Reputable airlines are not flying to the country because they have not been paid their debts. Currently, the country is struggling even to ship oil in and out of the country, so I don’t know how [it will] be able to import more tourists.”

The economic failings that have contributed to the country’s state of lawlessness are rooted in Venezuela’s oil dependency. The country may have the largest proven oil reserves in the world, but a lack of diversification has left the economy at the mercy of market volatility.

Mismanagement and a lack of investment have also hamstrung the industry. Today, the oil that is being produced is of such low quality it must be mixed with imported crude from elsewhere to make it usable. This has created the economic instability that serves as a backdrop to the country’s civil disobedience.

While Venezuela has much to offer its visitors, there are many other countries that can deliver unforgettable memories in a far safer environment.

Paying a high price
Another major issue that makes travel difficult is Venezuela’s inflationary problem. The IMF predicts inflation will reach 13,000 percent this year; for the Venezuelan people, this has resulted in severe shortages of many essential goods. In the county’s already beleaguered hospitality sector, meanwhile, it has meant rationing toiletries and other items that travellers cannot go without.

Although the challenges that hyperinflation places upon tourists are nothing compared with the daily struggle faced by locals, it certainly presents difficulties. Most obviously, it has created a black market that makes it difficult to know how much anything is worth. The same bottle of Venezuelan rum, for example, could cost travellers as much as $500 at official exchange rates, but less than $10 on the black market.

This dire economic situation presents both challenges and opportunities for travellers. Locals are undoubtedly desperate to trade their domestic currency for a more stable foreign one – a single US dollar may be traded for millions of Venezuelan bolívares – meaning international visitors can live like a king as long as they bring foreign currency with them. However, inflation has also created complications.

While Venezuela has much to offer its visitors, there are many other countries » that can deliver unforgettable memories in a far safer environment

“Inflation makes life very difficult for the tourism sector,” Clarke said. “Services are usually priced in US dollars, but local companies often still have to pay for things in bolívares so prices can change rapidly, particularly with services like travel, which may be booked months or years in advance.”

A bigger issue is that in the current high-inflation climate, tourists have become an even bigger target for thieves. Criminals, well aware that travellers are likely to have brought hard cash to the country (visitors are allowed to carry as much as $10,000 into Venezuela without having to declare it at the border), will be keeping a lookout for foreign tourists.

Future prospects
If circumstances were different, Venezuela’s tourism industry could certainly attract many more visitors than it currently does. Angel Falls, the world’s highest uninterrupted waterfall, would draw tourists from all over the world, despite its inaccessible location. The 16th-century city of Coro and the University City of Caracas, both of which are UNESCO World Heritage Sites, would surely attract many others.

In spite of the Venezuelan Government’s bold assertion that tourism can become the second-biggest source of foreign currency (after oil), this appears unlikely under the current Maduro regime. One of the main issues is that there does not appear to be much political appetite to fix the country’s glaring social issues.

In May, the Venezuelan president reopened the Hotel Humboldt, a seven-star establishment that was originally constructed in the 1950s and was abandoned for more than 30 years. But vanity projects like this will not attract tourists back to the country.

They are not staying away because there aren’t enough luxury hospitality options – it’s much more likely that they were put off by the more than 26,000 homicides that occurred in the country last year. “I don’t believe there is any quick fix for Venezuela to encourage tourists to return,” Clarke said. “Until the political, economic and security problems are resolved, the country will remain off-limits to all but the most intrepid individual travellers.”

However, Venezuela’s route out of crisis is being blocked by the country’s political elite. President Maduro and his United Socialist Party of Venezuela have cemented their grip on power even as protests against the government become more commonplace. The country has transitioned from an illiberal democracy to an autocracy in recent years, meaning the economic reforms that Venezuela so desperately needs are unlikely to be enforced.

For tourists, this means that the wonderful sights that this country undoubtedly possesses remain unreachable – the table-top mountains, or tepui, that cannot be found anywhere else in the world, left largely unexplored. The turmoil currently facing Venezuela is isolating the country from the rest of the world, to the detriment of locals and tourists alike.