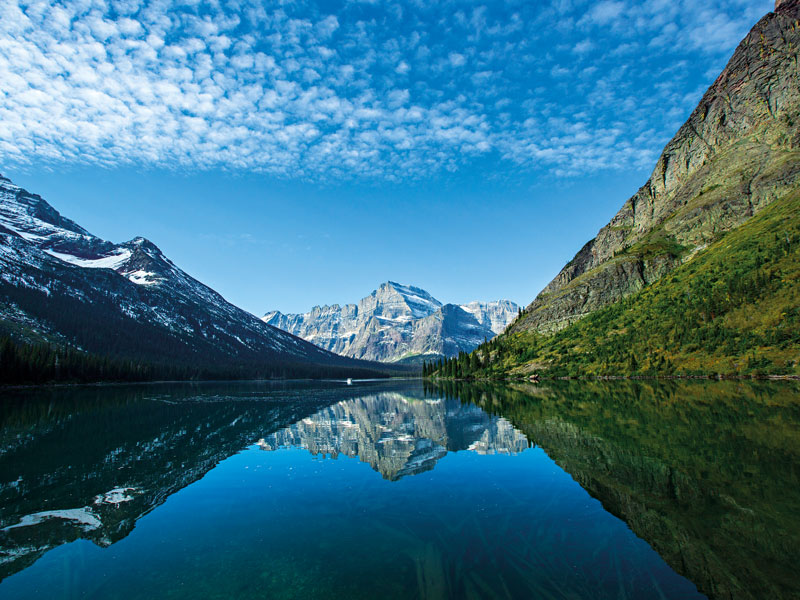 Because of its vast size, the US is home to several destinations that are both in danger of disappearing and have seen increased traffic. Glacier National Park in Montana is one such destination

The environment is changing. The climate is warming, deforestation is eating into woodlands around the world, and sea levels are slowly but surely rising. This has sparked anxiety among travellers as they realise there is a time limit on how much longer they will be able to visit many destinations. Consequently, people are increasingly flocking to endangered destinations, where the natural beauty or unique culture is at risk of disappearing.

This phenomenon is known as ‘last chance tourism’ or – more morbidly – ‘doom tourism’, and has been a prominent travel trend in recent years. Ironically, however, increased visitor numbers can aggravate the factors putting a destination at risk in the first place.

Xavier Font, Professor of Sustainability Marketing at the University of Surrey, told Business Destinations: “There was a time when tourists were quite happy to stay far away from some of the local resources, [but] now there’s more interest in tourism [being a] more authentic experience, seeing everything and doing everything. This has fuelled the idea of
last chance tourism.”

A looming threat
Because of its vast size, the US is home to several destinations that are both in danger of disappearing and have seen increased traffic. Glacier National Park in Montana is one such destination. The park’s eponymous glaciers, of which there were around 150 midway through the 19th century, now total 26.

The glaciers began thawing in around 1910 and entered a stage of rapid melting in the 1970s. Recreational visitors to the park have been steadily increasing since 2011, when 1.8 million people visited the park. Last year, 3.3 million people visited, marking the first time the three million barrier was broken.

One of the most heavily trafficked last chance sites in the world is the Great Barrier Reef, the world’s largest coral reef, which is being progressively bleached by warming waters. The reef has always been extremely attractive for snorkellers and scuba divers, and has seen a significant increase in visitors over the past 10 years. In a 2016 survey by the Journal of Sustainable Tourism, 69 percent of the 235 respondents said that they were visiting the reef before it was too late.

The Arctic and Antarctic are further examples of vast areas of natural beauty disappearing due to climate change. Pictures of emaciated polar bears drifting through a body of water on a thin sheet of ice have been seared into the public eye as an emblem of climate change.

Likewise, satellite images of melting ice caps in the South Pole have strengthened tourists’ desires to visit the area before it’s gone altogether. Arctic regions are perhaps the best example of the cyclical nature of last chance tourism, as the damage they sustain actually makes them more accessible: waterways are more navigable in the absence of ice, and the time window when weather conditions are favourable for tourists is getting longer every year.

The Dead Sea, famous for its high salinity that allows people to float effortlessly on the water, is also vanishing: around one metre of water evaporates from the surface every year. In 2017, the Maldives – the lowest-lying country in the world – also saw a 15.2 percent year-on-year growth in the number of tourist arrivals, an increase that coincides with the looming threat of rising sea levels.

Culture vulture
Interestingly, the trend doesn’t only see tourists flocking to endangered natural sites, but to areas of cultural importance too. When US President Barack Obama began normalising diplomatic relations with Cuba, there was optimism, but nestled within it was a fear – mostly among tourists – that Cuba would lose its character and become westernised.

The streets, made up of an eclectic mix of architectural styles and lined with colourful cars from the 1950s, have long been part of the island’s charm. In 2017, the number of tourists visiting the Caribbean island nation skyrocketed, mostly because Americans were suddenly allowed to go, but also because people feared it was the beginning of the end of Cuba as they imagined it.

Visitor volumes are also buttressed by discount airlines offering cheap flights to capitalise on heavier demand. For tourism services, particularly local ones, the trend could be lucrative – at least in the short term. Having a vanishing piece of real estate in high demand is a unique selling point that becomes more exclusive as time goes on. Companies and marketers have identified the time-sensitive opportunity they have been handed, and are exploiting it while they have the chance.

Damage control
In the fervour to catch a final glimpse of a vanishing landscape, it is easy to disregard one’s own impact, thereby catalysing the very effect that motivated the trip. For example, the sun cream and sweat from an increasing number of tourists visiting the Great Barrier Reef may accelerate the bleaching of the corals. Heavier footfall at Machu Picchu, where 1.2 million arrivals were recorded in 2015 – double the figure of 2005 – may escalate the risks of the landslides that threaten the ancient Inca citadel.

glaciers in Glacier National Park have melted since the 19th century

people visited the Florida Everglades in 2017

increase in visitors to the Maldives in 2017

Measures put in place by governments to minimise that damage, including capping the number of tourists allowed to visit a site, can have the unintended effect of compounding people’s desire to go. What’s more, the planes that tourists use to fly to last chance destinations themselves also release greenhouse emissions that contribute to the problem.

To control the number of tourists that can access a destination, local governments have several tools at their disposal. The simplest, and sometimes most effective, is pricing, as demonstrated in the Galápagos and Easter Islands. Increasing the price of entry can drive down footfall significantly, while not necessarily sacrificing revenue.

Even with prices remaining the same, traffic can be reduced by introducing timed ticketing – allowing people to the site only during certain hours – as well as limiting the size of groups and offering advanced bookings rather than ‘on the door’ ticket sales.

However, these attempts to stem the flow of visitors are only as good as the authorities’ propensity to enforce them. “[Caps] can work, but it depends on how convinced the local government is about the measures,” said Font. “The main problem here is not the technical solution – the main problem is the political will. In general, the political will only happens when it is too late.”

Now or never
For marketers, whether from a travel company or the destination itself, last chance tourism poses an ethical problem. Maximising the destination’s value would mean advertising the fact that it is in danger, but success in that sense would mean causing further harm, not to mention making a finite economic resource that much more so. Marketers may be tempted to use the language of ‘last chance’ to generate revenue, especially given the large amounts of money consistently spent by tourists.

Maximising the destination’s value would mean advertising the fact that it is in danger, but success in that sense would mean causing further harm

Font explained of the Maldives: “Strangely, some of [its] own advertising said: ‘Come and see the Maldives before it disappears.’ I thought it was a really idiotic… way of marketing a country.” He added: “My feeling is that it is unethical to market that way, but it is also normal that companies want to sell the most.

The majority of companies are not concerned about protecting the asset that creates their business, particularly the companies that think: ‘If something gets spoilt I can go and I can take this somewhere else.’” There are not many other destinations or travel companies that explicitly focus their marketing on the fact that the experience is time sensitive, but the message is often present between the lines.

Tourism is arguably the largest service industry in the world, with millions of people jet-setting to distant destinations every day. It is also commonly referred to as a ‘smokeless industry’ because negative effects are often not noticed until the damage is significant.

Natural wonders that past generations have enjoyed, and that we have seen in movies and read about in books, have an increasingly finite lifespan, and people have developed a fear of missing out on seeing them. The natural human urge to want what you can’t have – or what will soon be impossible to have – can dangerously aggravate the problem, and governments must do more to guard against the compounding effect of that increased traffic.