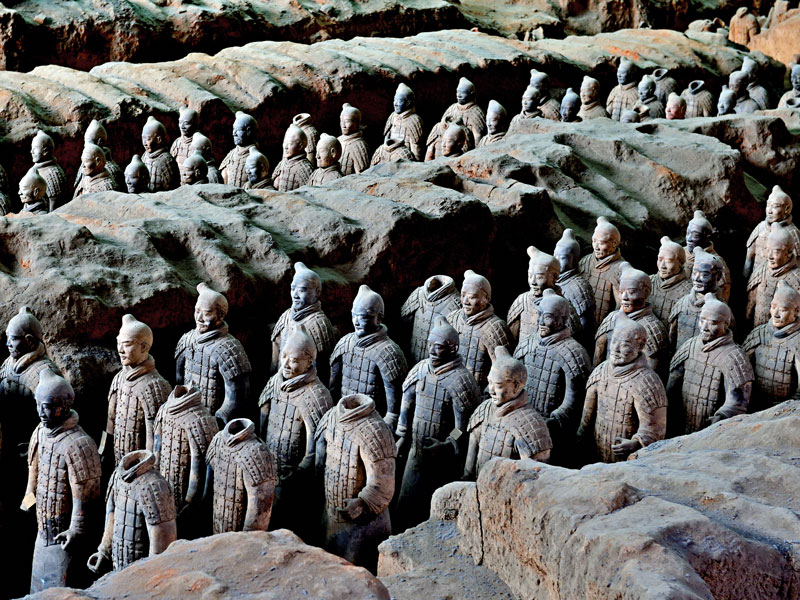 The Museum of Ethnology in Hamburg cancelled its exhibition on the Terracotta Army after discovering it was being sent replicas, not the originals

The differences between East and West are varied and difficult to pin down. They can relate to political governance, social mores, creative expression and many other areas besides. In addition, because these differences are cultural, rather than geographic, it is difficult to determine where to place the dividing line between the eastern and western worlds.

Nonetheless, examining the broad cultural trends across the two hemispheres can prove useful. As well as highlighting differences, such analysis can also identify hitherto unnoticed similarities that could help East and West to understand and bridge the gap between their respective world views.

While western critics may be inclined to denounce imitation as self-abasing, in the East this is more often seen as a completely acceptable reverence for tradition

China, with its population of 1.4 billion, has often taken a central role in discussions of the East, especially since its economic heft and global influence have increased. However, it is worth remembering that the East and West are not homogenous entities: within them, you will find many countries that possess their own, distinct views. On the level of the individual citizen, this diversity is even more pronounced.

One area in which the two regions often diverge is through their appreciation of art. In particular, their respective appreciations of originality can often appear diametrically opposed to one another. While western critics may be inclined to denounce imitation as self-abasing, in the East this is more often seen as a completely acceptable reverence for tradition.

Playing by different rules
Chinese businesses today are often accused of copying their western counterparts. Examples are widespread and sometimes quite impressive. In 2016, Alibaba founder Jack Ma declared: “The fake products today are of a better quality than the real names.” However, if counterfeit goods do not hurt consumers, they can still cause significant damage to a business and its brand image. US President Donald Trump has made tackling intellectual property theft a major aim of his administration.

While it would be easy to dismiss imitations as lazy acts of piracy, they may also have deeper cultural explanations. In China, the concept of shanzhai, a neologism meaning ‘fake’, has emerged recently to explain businesses that are based on counterfeit goods. The products produced by these organisations – far from being inferior knock-offs – may, as Ma claimed, turn out to be of a better quality than the originals.

The inspiration behind the shanzhai business model can be seen elsewhere in Chinese life, particularly in the art world. It may stem from the fact that the Chinese actually have two different notions of what it means to be a copy of something.

Fangzhipin refers to a copy where the difference from the original is clear – such as buying a replica keyring of the Rosetta Stone in the British Museum gift shop. Conversely, the concept of fuzhipin describes a copy where the difference is indiscernible. According to Byung-Chul Han, Professor of Philosophy and Cultural Studies at the Berlin University of the Arts, this type of imitation has “absolutely no negative connotations”.

This helps to explain why full-size replicas of world-famous landmarks, like the Arc de Triomphe, can be found in various Chinese towns. While copies like these would be frowned upon in the West – or seen as tacky, at least – such criticism is largely absent in China. This cultural divide has caused friction in the world of high art as well.

In 2007, the Museum of Ethnology in Hamburg cancelled its exhibition on the Terracotta Army after discovering that the exhibits it was being sent from China were not the originals, but modern-day replicas. For the Chinese, the museum’s decision was difficult to understand; the copies being sent were not counterfeit and there was no deception on their part.

In fact, there exists a workshop at the Terracotta Army excavation site in Xi’an, Central China, that reproduces figures to this day. It is more accurate to think of the newer figures as a continuation of ancient production methods, rather than forgeries.

It’s not you, it’s me
Academics who have studied the differences in the appreciation of high art between East and West have suggested that they have deep-rooted causes. Gish Jen, author of The Girl at the Baggage Claim: Explaining the East-West Culture Gap, believes the contrast stems from the different ways the two cultures view the ‘self’.

“Very foundationally, here in the West we are individualists,” Jen told Business Destinations. “We think that everything that comes from within is the most important. We imagine ourselves as having an interjected divinity – that we have a divine spark within. And we feel that art itself is a reflection of this divine self. However, this is not the definition of art that holds in the East and it has not been the definition in the West for that long at all.”

This fundamentally different appreciation of the self and how it manifests in the art world can be viewed through the prism of some of East and West’s most famous painters. The Chinese artist Fan Kuan, best known for his Song dynasty painting Travellers among Mountains and Streams, builds upon the classic Chinese perspective of three planes and makes use of a number of artistic conventions dating back centuries. Many artists have drawn inspiration from his paintings, some even openly inscribing their artwork with the words, “imitating Fan Kuan”.

Conversely, an artist like Lucian Freud has a much more individualist bent. He described his work as “purely autobiographical” and rejected suggestions that he was painting within a particular school of art. He may have been influenced by German expressionism and later realism, but he thought of his work as uniquely his own.

In the East, there is often a more playful appreciation of the self, one that diverges from modern depictions in the West. It has greater parallels with older societies, such as the ancient Greeks, who thought the fundamental unit of human society was the polis, or city, not the individual.

Over time, however, the individual became the primary outlet for creative expression in the western art world. Although the likes of Fan and other Chinese artists recognised their predecessors and understood that they were working within a tradition, art in the West has more often tried to dismiss its influences in pursuit of something truly original.

A bridge too far
While it may be the divine spark that fuels the individualist art style found in western cultures, religion also influences eastern creative expression. The Buddhist concept of anattā, for example, teaches that there is no permanent, underlying soul – in English, it is often referred to as the doctrine of ‘non-self’. Jen argues that it is difficult to say whether eastern religions created the region’s cultural viewpoints, or if it was the other way around. Undoubtedly, however, they are self-reinforcing.

While it may be the divine spark that fuels the individualist art style found in western cultures, religion also influences eastern creative expression

“If you look at a culture like China’s, Buddhism emphasises dissolution of the self and many great artists emerge from that,” she explained. “[Fan] would say he is painting without ego, without will. He is just letting nature paint through him. He sees himself as someone without boundaries. In the West, we have Protestantism, which is associated with individualism. There is a divine spark within and we maintain a firm boundary around our sense of self. That self is speaking directly to God.”

The wooden shrine is – to the worshippers who gather there, at least – 1,300 years old. However, it is completely rebuilt every 20 years as part of the Shikinen Sengu ceremony. The existing structure, therefore, is not a copy – but a manifestation of the eternal. Again, tradition and perpetuation are valued above abstract notions of originality or authenticity.

If the different appreciations of art and culture held by East and West are to be truly understood, it is essential that discussions do not descend into clichéd generalisations. Not every artist from the Far East rejects individualism, nor does every one from the West embrace it. It is also important to note that the eastern concept of high art does not place great importance on slavish imitation. Inspiration and tradition are highly valued; prosaic copies are not.

As globalisation continues, it is possible that the differences between East and West will become less pronounced, but this is far from guaranteed. “I think that an understanding between the two sides could be reached, but I think that unfortunately we have as much hardening of the boundary as we do softening, and this is related to greater geopolitical issues,” Jen explained.

“Our rejection of cultures that are not our own is deep-seated and goes back to when we were tribal beings. This suspicion of anything that is ‘not-self’ is less useful today, but we’re still wired to think that way.”

If the divide between East and West does grow wider, it would be hugely unfortunate. Great art has undoubtedly come out of both traditions, and softening the tension between the two would have wider benefits as well. After all, this tension is economic, religious and cultural. If we can better understand the divide, it could usher in a period of closer cooperation that would provide global benefits beyond the world of art.