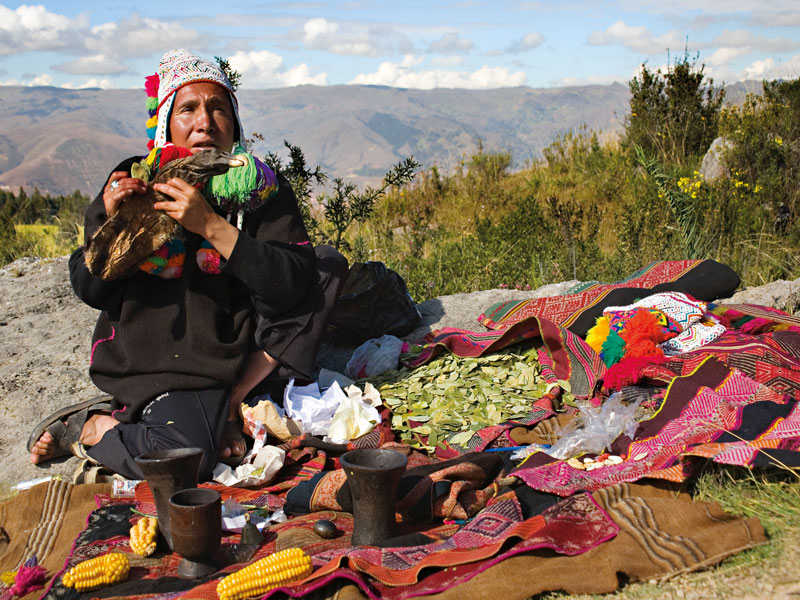 Ayahuasca is traditionally made by a shaman, who also leads the ayahuasca ceremony, which can last up to eight hours

Sting called it “the only genuine religious experience” he’d ever had. Actor Lindsay Lohan says it helped her gain control of her struggles with addiction. Beat artists Allen Ginsberg and William S Burroughs published an epistolary book detailing their experiences of it, with Burroughs writing: “It produces the most complete derangement of the senses.”

It is the result of glowing appraisals such as these that ayahuasca, an entheogenic brew popular among tribes in the Amazon basin, has gained cult status in recent years. As awareness of the drug has grown and accessing it has become easier, greater numbers of tourists have made the trip to South America in the hope of experiencing the life-altering spiritual revelations that so many profess to have felt.

While the explosion in ayahuasca’s popularity may have brought enlightenment to some and business opportunities to others, its commercialisation is not without risk. Reports have emerged of tourists dying or being seriously injured as a result of engaging with ayahuasca, while demand has driven up the price of the plants used to make the brew to such an extent that some locals can no longer afford to take part in the traditional practice.

Dangerous concoction
Ayahuasca is made by brewing the Banisteriopsis caapi vine with the shrub Psychotria viridis, which contains the psychoactive ingredient dimethyltryptamine, or DMT. The brew is traditionally made by a shaman, who also leads the ayahuasca ceremony. This can last up to eight hours (the effects of the drugs typically last around six) and often includes purging through vomiting, which is believed to cleanse the body and release negative emotions.

While the ‘trip’ can prove enlightening, it can also be extremely physically and psychologically distressing, as travel blogger Tom Bourlet discovered when travelling through South America several years ago. “I was planning on doing it myself, however I ended up backing out at the last minute. I actually have a fear of vomiting and after seeing a friend take it a few hours before and how his body had responded, I was certainly put off,” he told Business Destinations.

Ayahuasca consumption has also been linked to five fatalities in Peru since 2015, one of which – the death of Briton Unais Gomes – generated significant media coverage due to its violent nature. During a ceremony, Gomes reportedly became violent and attacked Joshua Stevens, a Canadian who was not taking part. In self-defence, Stevens stabbed Gomes, killing him.

Imitation ayahuasca
Despite these reports, ayahuasca tourism continues to grow apace. Obtaining exact statistics is challenging as many governmental bodies in South America do not record this data, as Business Destinations discovered when it reached out to the relevant authorities. Ayahuasca tourists may also be unwilling to declare that taking the drug is the purpose of their visit, which further contributes to the lack of specific data. However, the prevalence of anecdotes from tourists who’ve taken ayahuasca indicates that it is a growing trend in the West.

Some travel to South America with the sole intention of taking ayahuasca, while others encounter the drug as part of a larger expedition. Bourlet is part of the latter category; he was travelling through Bolivia when he first became aware of ayahuasca. “It was offered all over the streets as you walked back to your hostel,” he told Business Destinations. “It wasn’t shamans that approached us though, more like tour sales people trying to push adventure trips, such as piranha fishing or treks through the rainforest. There were also excursion managers that would come to the hostels to book people for trips for the following day.”

It’s perhaps unsurprising that ayahuasca is being so aggressively marketed – after all, there’s plenty of money to be made from it. In Iquitos, one of Peru’s ayahuasca hotspots, there are more than 40 retreats offering ceremonies, with prices as high as $3,000 for a 10-night stay. The influx of tourists has also driven up the price of ingredients for the potent hallucinogenic brew – the Banisteriopsis caapi vine has tripled in value in the past six years and is now being grown commercially. For farmers in impoverished agrarian regions of South America, this is a lifeline to improve their economic circumstances.

However, the prospect of commercial gain has attracted corrupt profit-seekers who have been known to promote themselves as shamans despite having no knowledge of ayahuasca. There have been reports of these faux curanderos, as they’re known in Peru, brewing ayahuasca with toxic alternative ingredients, leading some participants to become seriously ill. Worse, a number of women have allegedly been sexually assaulted during ceremonies at the hands of these impersonators. In 2015, an anonymous letter penned by 15 women circulated online. The letter detailed their experiences of sexual abuse while staying at a retreat in Peru. The same year, so-called neo-shaman Édgar Orlando Gaitán Camacho was charged with assaulting eight women while leading them through ceremonies; authorities suspect he may have drugged and raped as many as 50 women in total. These are just two instances in a slew of similar allegations.

Commercialising culture
The historic nature of ayahuasca ceremonies as a spiritual practice means both the drug and the experience of taking it are virtually unregulated in South America, allowing malpractice and criminality to go unnoticed and unpunished in many cases. Foreign tourists are most likely to be the targets of abuse, given that they will be unaware of the hallmarks of a real shaman. During the ceremony Bourlet witnessed, he said: “The shaman seemed real, however it was all arranged via a tour guide, so it was very difficult to know. The shaman wore traditional clothing and jewellery that matched the stereotype, but I have no idea whether they were real or not.”

Not only do these copycat shamans put tourists at risk, they also reflect poorly on traditional plant healers, who view the consumption of ayahuasca as a healing experience. Bourlet said: “I was surprised at how negatively [ayahuasca] was sold in some places. [I saw it] offered by some people on the streets alongside a trip to the ‘world’s first legal cocaine bar’.” This sort of marketing entirely undermines the spirituality of the practice, transforming it into a sort of adventure tourism for thrill-seekers.

As the perception of ayahuasca shifts and prices rise, indigenous communities risk being unable to take part in a practice that forms a key part of their spiritual identity. Putting something that is considered sacred up for sale to the highest bidder not only destroys a key part of the lives of these tribes, but also has wider implications in terms of disrupting the local economy and encouraging deforestation of the Amazon to make space for ayahuasca cultivation. Ironically, while many tourists travel to South America for an authentic ayahuasca experience, by doing so, they are threatening the very traditions that make up the foundations of the ceremony, placing shamanic spirituality at risk of becoming little more than a tourist attraction to be mined for profit.