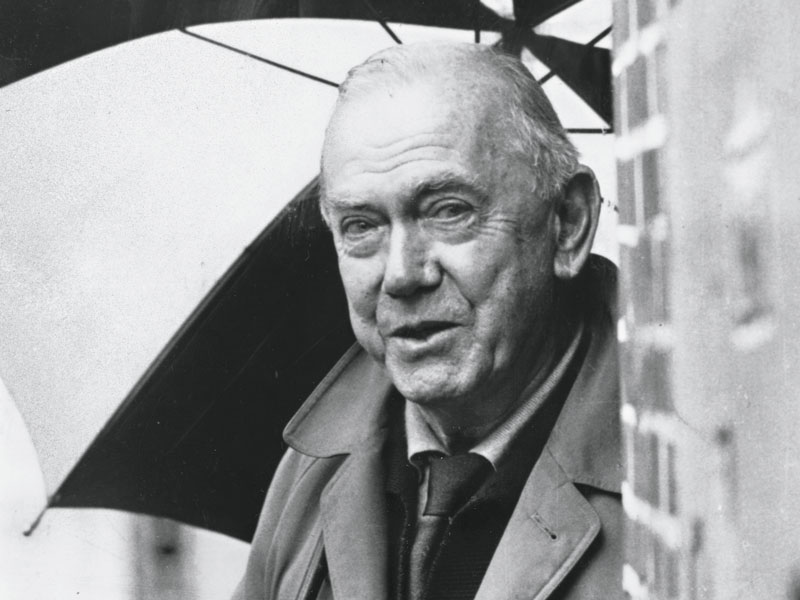 Greene's life was filled with travel, adventure, danger and intrigue. For most of his days, he was on the move, flitting from one place to the next

Graham Greene led a peculiar life – never staying put for long, and often venturing to restless, even dangerous, countries in search of inspiration. With a career spanning more than six decades, he was a staggeringly prolific writer, completing 28 novels, copious short stories, letters, articles, plays, film scripts and non-fiction books, many of which were translated onto the big screen.

Simon Wright, Assistant Professor of English at Chulalongkorn University and author of Graham Greene: Finding the Man Within, explained his popularity: “He was a welcome antidote to what he described as the ‘jaunty Marxism’ of the 1930s, and saw social reforms as deceptive palliatives that ignored the serious moral failings of mankind and the shortcomings of humanity.”

He trotted the globe back when very few people were able to do so, visiting distant and often hostile places

What’s perhaps most remarkable about Greene is the truly extraordinary life he led. It was filled with travel, adventure, danger and intrigue. For most of his days, Greene was constantly on the move, flitting from one place to the next – never still, never settled.

He trotted the globe back when very few people were able to do so, visiting distant and often hostile places – the Congo, Cuba, Nicaragua, Vietnam. But it wasn’t just writing he undertook in these far-flung destinations: for years, Greene also carried out intelligence work for the UK’s Secret Intelligence Service (known commonly as MI6). His involvement in the world of espionage and his insight into so many places outside of his native Hertfordshire had a profound influence on his work.

Wandering writer
To understand why Greene travelled so extensively, it is important to start at the beginning. Greene was born in 1904 at the boarding school where his father served as headmaster. His school years, however, were filled with angst. “His time at Berkhamsted School confirmed him in his belief that he was an outsider,” Wright told Business Destinations. “But it was boredom that became his major affliction, hence his dabbling with suicide and games of Russian roulette on Berkhamsted Common. His constant penchant for danger and visiting dangerous regions of the world was a consequence of his abnormal sense of ennui.”

Having run away from school aged 16, Greene was sent to live with a therapist in London for a year in order to undergo psychoanalysis; the treatment failed to bring him any sense of contentment. He went on to study at the University of Oxford’s Balliol College, but the anxiety of his childhood did not escape him – it never would. It was at this time that he began to travel, and it awakened in him a wanderlust that would shape the rest of his life.

Dr Christopher Hull, Senior Lecturer in Spanish and Latin American Studies at the University of Chester and author of Our Man Down in Havana: The Story Behind Graham Greene’s Cold War Spy Novel, explained Greene’s lifelong need to travel: “One of the main drives for his travels from an early age was to deal with his manic depression… [which] affected him from adolescence right through his adulthood. [He had a] desire to escape… He needed external stimuli – be it risky or seedy locations – to take him away from himself and his own reality, and also his troubled private life.”

A perfect spy
Enabling and feeding this constant desire to escape was Greene’s career with MI6. In 1941, Greene was recruited to the service by his sister, who already worked for the organisation. After some training in the UK, Greene was sent on his first assignment to Sierra Leone, which was a British colony at the time. It was an experience he drew on when writing one of his most famous books, Our Man in Havana.

Hull noted: “It’s important to point out that he wasn’t a spy as such in West Africa. I suppose our awareness or knowledge about spying tends to come from James Bond films, but… at least during the Second World War, he was very much an intelligence officer, not an agent or spy.” As Hull explained, Greene acted as a middleman, recruiting local agents and relaying the intelligence they gathered in the field back to London.

After the end of the Second World War, Greene continued to work for MI6 “informally, and keeping his eyes and ears open” on his many journeys abroad, Hull said. Naturally, this cannot be proven by confidential security service documents, but, Hull pointed out, “it’s no coincidence that he kept turning up in places at key political moments”. He added: “There was Indochina, which was involved in a colonial war in the early 1950s. He went to Malaya in the early 1950s during its guerrilla war, Kenya in the same decade during the Mau Mau Rebellion, [and] Cuba in the late 1950s [during its civil war].

“It was pretty evident that MI6 was paying for or partially financing many of these trips. We’re talking about a period of the 20th century when long-haul travel was phenomenally expensive. In the 1950s and 1960s, only businessmen, merchant seamen and diplomats undertook that much foreign travel.”

As well as collecting information for MI6, Greene was also able to gather material for his novels and journalistic articles; many of the destinations he travelled to served as the settings for his stories. Another reason for his constant travelling, Hull pointed out, was to holiday with his mistresses: in the late 1950s, for example, he frequently flew to Sweden to visit the actor Anita Björk, while he travelled extensively with his long-term mistress Catherine Walston (on whom he partly based The End of the Affair), visiting Indochina several times, as well as the Caribbean and the Italian island of Capri.

Latin influence
Greene’s first experience of Latin America – a region he would come to visit many times throughout his life – began with Mexico in 1938. “He went on a book assignment to investigate the persecution of the Catholic Church and Catholic priests in Mexico,” Hull told Business Destinations. His time in Mexico led to two books, the first being a travel log called The Lawless Roads. The second was The Power and the Glory, about a priest fleeing oppression in Southern Mexico.

During this time, Greene became very interested in Latin American politics and just how deeply it impacted the lives of the region’s citizens, though it was in Cuba that he became actively involved. Greene arrived on the island by accident in 1954 (he had mischievously told a security officer that he was once a member of the communist party, was disbarred from his US flight and ended up in Havana instead). At the time, Havana was a Las-Vegas-type playground for Americans, with cabaret shows and drugs aplenty. “On this unplanned visit, he was offered drugs, girls, a combination of girls and a boy at the same time, and such distractions really appealed to Greene – a manic depressive,” said Hull.

Greene returned to Cuba in 1957, when he began writing Our Man in Havana. Impassioned by the plight of the Castro brothers, he travelled to the Sierra Maestra hills with warm clothing for Fidel Castro’s rebels. Once back in the UK, he successfully lobbied the British Parliament to instigate an arms embargo against the country’s right-wing dictatorship.
When conducting research for his book, Hull discovered how deeply Greene was influenced by his travels. “One of the other things that came out for me… was how much reality there was in his fiction; how many events and characters from real life appear in what, in the end, are works of fiction,” said Hull. “Practically everything in his novels came from reality; he almost didn’t have to invent anything.”

Greene was a complex man, deeply affected by his depression and feelings of ennui. This drove his entrenched need for escapism and danger, which ultimately saw him lead a somewhat nomadic life, taking countless trips to countries in the throes of deep unrest. What he saw and experienced became the basis for a sensational body of work that remains well-read
and loved today.