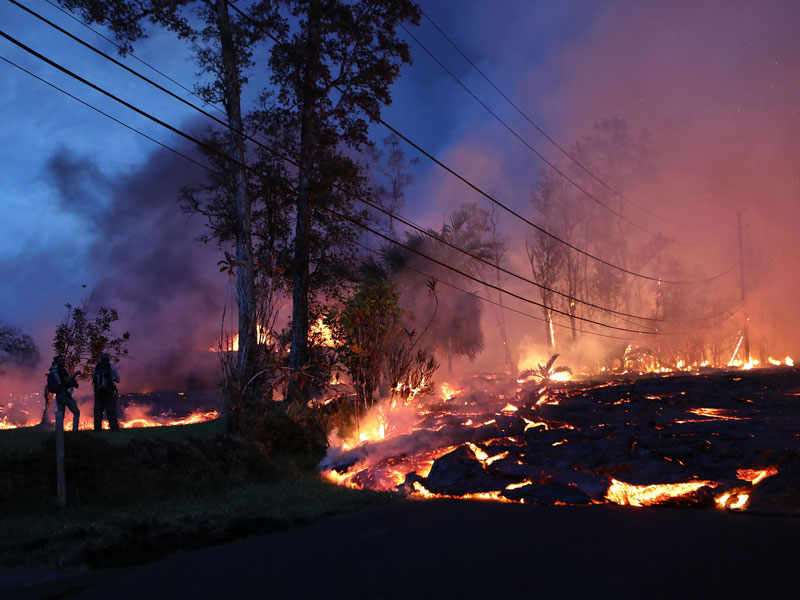 As a result of the eruption, 13.7 square miles of the island were covered by lava. Some 716 homes were destroyed and 324 hectares of new land created

In early December 2018, residents from Puna, the easternmost district of the Island of Hawaii, gathered to celebrate the reopening of Isaac Hale Beach Park. Those assembled on the volcanic sands offered blessings and ceremonial gifts – known locally as ho’okupu – in thanks for being able to use the beach once again. It was a sign things were returning to normality after a difficult few months in the US’ 50th state.

Volcanic eruptions are a fact of life in Hawaii – the archipelago owes its existence to volcanic activity – but last spring brought unexpected destruction. On May 3, 2018, following more than 250 earthquakes in the space of 24 hours, the Kīlauea volcano erupted.

While Kīlauea may have stopped erupting, longer-term damage to Hawaii’s reputation as a holiday destination is proving more difficult to overcome

While volcanoes in Hawaii don’t really stop erupting – some experts are reluctant to describe the events of May 2018 as a new eruption at all, viewing it as the latest stage of a larger eruption that began in 1983 – commentators tentatively declared the Kīlauea eruptive event to be over in December, after seismic activity and emissions reached a suitably low level. Unfortunately, the community’s recovery will take longer still.

In total, 13.7 square miles of the island were covered by lava – some by as much as 80 feet of molten rock. There were 716 homes destroyed and 324 hectares of new land created. Miles of roads were blocked and, as with Isaac Hale Beach Park, access to much-loved parts of the country was prohibited.

Tourism, a fundamental part of the Hawaiian economy, was negatively impacted as a result. Images of roads being torn apart and lava flowing relentlessly across the land were broadcast around the world – hardly the sort of thing that encourages people to book flights. So, while Kīlauea may have stopped erupting, long-term damage to Hawaii’s reputation as a holiday destination is proving more difficult to overcome.

A violent setback
Even though Hawaiians have learned to live with the threat of volcanic events, the eruption in May last year was unusually catastrophic. Kīlauea is the most active volcano in the world, with data collected from sensors installed around the crater and the surrounding area showing that the events leading up to the eruption were unprecedented; still, such an impact had rarely been witnessed before.

“At the present moment, the United States Geological Survey [is] still citing Kīlauea as one of the most dangerous volcanoes in the US,” Hollie Bailey, a freelance PR representative for travel firm Health and Fitness Travel, told Business Destinations. “Similar to the [Mount] Agung eruption in Bali during late 2017, thousands of people were evacuated out of the ‘red zone’ and tourists were warned to stay away.

“Tourism in Bali did fall for a couple of months after the release of the Agung gas cloud, but not to the same extent as Hawaii, where a drop of 50 percent occurred. Rivers of lava are definitely a scarier prospect than a vertically emitting gas cloud, which caused more of a panic and resulted in holidays cancelled.”

Although it is difficult to quantify the total financial impact, some estimates indicate the Kīlauea eruption may result in losses of over $200m in terms of visitor spending. One of the state’s biggest attractions, Hawaii Volcanoes National Park, had to close between May and September 2018, and a full restoration of damaged areas is likely to take years.

Despite the island reopening its attractions, visitors are taking their time in deciding whether to return. According to the Hawaii Tourism Authority, the average number of daily visitor arrivals to the Island of Hawaii in October 2018 was down 15.7 percent compared with the previous year. Visitor spending, meanwhile, fell by 11.4 percent.

Local businesses have felt the pinch, with hospitality firms and other companies that rely on tourism for income reporting a fall in customer numbers. Smaller businesses in particular can struggle to rebuild momentum after an enforced period of closure. But despite its destructive nature, volcanic activity is also one of the archipelago’s principal tourist attractions.

Stemming the flow
The worry for tourism officials is that the Kīlauea eruption will accelerate a longer-term decline in visitors. One of the main issues is that the now-solidified lava flows have permanently changed the volcano. Prior to the eruption last May, the inside of the Kīlauea crater – known as Halema’uma’u – was home to a flowing, active pool of lava.

A significant number of the 5,500 daily tourists who visited Hawaii Volcanoes National Park came to see the lake of molten rock at Kīlauea’s summit. It was a particular draw for night-time visitors, with the glow from the lava proving spectacular against the night sky. Currently, it is difficult to determine when – or if – Halema’uma’u’s lava lake will return. The last time the lake drained was in 1924, and it was not visible for another 85 years.

“It will not be the same park that it has been in the past,” Mike Nelson, Executive Director of the Volcano Art Centre, told local news broadcaster KITV. “Nor do we anticipate that the volume and revenues will be the same [as] in the past… but we’re not losing hope.”

Just as too much volcanic activity can keep tourists away, too little can detract from the archipelago’s allure. “The challenge for Hawaiian authorities is to balance curiosity with the safety of people on the island,” Bailey said. “Many of the tourists are families with children, and these groups are the most likely to stay away as a result of the current damage. However, another big chunk of this sector is adventure-seeking people in their 20s and 30s who would actually be attracted to this situation.”

Volcano tourism certainly contributes significant revenues for Hawaiian businesses, but there are obvious risks involved. This is the dilemma faced by the Hawaiian tourism industry.

Tourists take the mantle
While it would be unfair to blame tourist officials for the economic devastation wrought by natural disasters, there are other problems emerging within the domestic tourism sector. Although visitor numbers were steadily increasing before last year’s eruption, this had not resulted in the kind of industry growth many would expect.

“It’s been almost 30 years since tourism actually had a record year, by constant dollar tourism receipts,” said Paul Brewbaker, president of Hawaii-based consultancy firm TZ Economics. “Tourism today is the same economic size as it was in 1989.”

Part of the reason for such disappointing revenue figures is that tourist behaviour is changing. In 1955, the average stay in Hawaii was 25 days; today, the most popular vacation length is between six and eight days. Simply increasing visitor numbers, therefore, is not enough to boost Hawaii’s tourism industry: tourists need to be encouraged to stay longer and spend more.

The development of ecotourism could be one way of encouraging visitors to spend more money on the islands, while also helping to protect the state’s natural environment. Social media, which helped spread frightening images of Kīlauea ’s destructive powers, should now be used by local businesses to reassure prospective visitors. Internal issues at the Hawaii Tourism Authority, which has experienced a high turnover of staff since 2015, also need to be resolved.

Tourism is absolutely vital to Hawaii’s economy. Despite the damage caused by last year’s eruption, there remains much for visitors to enjoy. If the Halema’uma’u lava glow doesn’t return, then the local tourism authorities will need to adapt their marketing efforts to focus on other areas of interest. The state cannot afford to suffer a long-term decline in its tourism sector; it must do more to manage its response to natural disasters. After all, volcanic eruptions are part of Hawaii’s past, present and future.