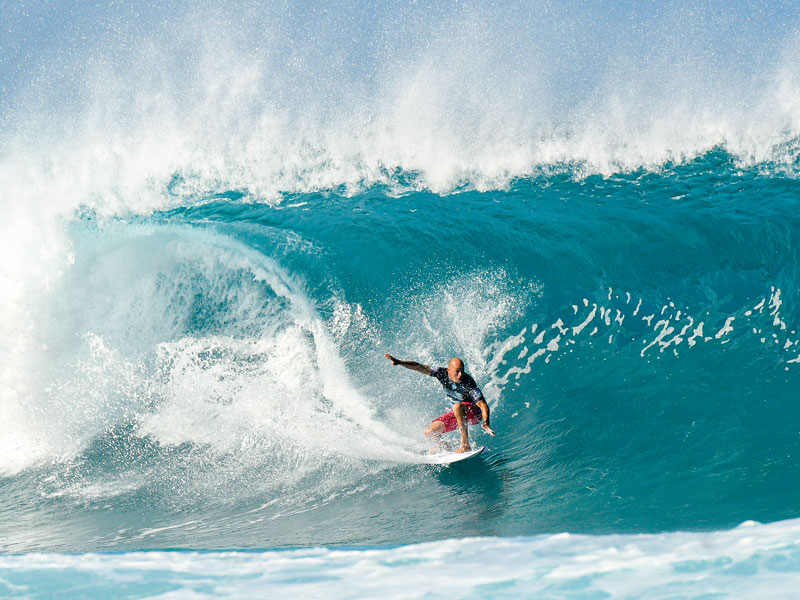 In September 2018, the world’s foremost surfers came together to see who could perform the best ‘alley-oops’, ‘rodeo flips’ and ‘tube rides’ at the Surf Ranch Pro event in California. So far, so ordinary: the West Coast has long been considered one of the world’s prime locations for waves and, as such, is a hotbed for surfing culture. Interestingly, however, the competition took place more than 100 miles from the Pacific Ocean, in the landlocked city of Lemoore.

In order to stage a professional surf event surrounded by farmland, Kelly Slater, an 11-time World Surf League men’s champion, created an artificial wave machine capable of producing competition-standard waves with unerring regularity. Apparently, there is no longer any need to submit to the whims of the ocean.

As more artificial wave machines are developed, surfing will be capable of reaching a far wider audience

But the predictability of Slater’s new machine has divided opinion. Some believe the ability to produce uniform waves at the press of a button detracts from the sport, whereas proponents claim naysayers are swimming against the tide of progress. One thing is hard to argue with: as more artificial wave machines are developed, the niche sport will be capable of reaching a far wider audience.

Hardly a shore thing
The debate surrounding the use of artificial waves at the Kelly Slater Surf Ranch is not purely a philosophical one between purists and modernisers: there are practical implications for surfers to consider as well.

In conventional competitions, choosing a wave is almost as important as what the surfer does with it. With a wave machine, however, uniformity can more or less be guaranteed. The World Surf League has claimed that subtle differences ensure every artificial wave is unique, but these variations do not replicate the unpredictability of na

tural waves – nor do they intend to. While this can make for a fairer competition, Arran Strong, a professional surfer from the UK, told Business Destinations that it also takes something away from the sport.

“It’s a different experience as there are not so many variables that need to be controlled at the same time, so it reduces the level of thought going into each wave,” Strong said. “You can more or less predict what the wave will do. Each surfer may set up with a different strategy but, in terms of a playing field, it’s overall a pretty fair one for all the competitors. There will always be a wave and they are all basically the same.”

Creating such uniformity is no easy feat – it’s something Slater and his team have been working on for some time. In fact, Adam Fincham, the lead engineer at the Kelly Slater Surf Ranch, first heard about Slater’s proposal for an artificial wave machine in 2006. For a number of years, the pair worked on trying to build a circular wave pool before technical challenges proved too much.

Eventually, Fincham and Slater settled on a linear wave pool and, in 2014, purchased 20 acres of land in Lemoore with the intention of turning their idea into reality. The following year, the wave pool was switched on for the first time. Since then, the Kelly Slater Wave Company (including the ranch) has been purchased by WSL Holdings, the World Surf League’s parent company. It was this acquisition that paved the way for artificial waves to be used on the professional circuit for the first time in September 2018.

Even after the purchase was completed, there was plenty of work to do before the ranch could be deemed competition-ready. Creating any wave in a 700-yard-long freshwater lagoon is difficult enough; creating waves reliably and to different specifications takes years of technical tweaking. It also requires a lot of water.

The method employed at the Surf Ranch uses hydrofoils to generate the waves – put simply, a metal blade is dragged through the water by cables. The bottom of the pool is equally important: scientists employed supercomputers to run weeks of simulations in order to precisely contour the shape needed to deliver high-quality waves.

Given the technical sophistication required, everything is monitored constantly to find areas for improvement. Reducing waste is a key focus for Fincham: if he can produce a wave with less spray, the water lost to evaporation can be reduced significantly. Currently, when temperatures are high, the lagoon can lose as much as 250,000 gallons of water in a single day.

Getting everyone on board
While the Surf Ranch may have proven itself worthy of a place on the professional circuit, its detractors remain. Removing the uncontrollable properties of natural waves may make things fairer, but it comes at a cost.

“There’s no doubt that it takes away from the whole idea of being in the ocean, searching for the right wave and being there at exactly the right time and place,” Strong said. “Surfing is a unique sport that can’t be replicated. I don’t think the Surf Ranch should be a stop on the tour. It is too artificial in comparison to the rest of the events.”

It is quite possible that more artificial wave machines will join the ranch on the professional circuit in the future. After all, it’s far from the only venue offering man-made surfing thrills: wave pools have been around for decades and recent technological developments have greatly improved the product on offer. As a result, more venues are popping up all the time.

“Hopefully [Slater’s] wave pool will be the only one used on the professional tour, but it already feels like it is getting more and more popular by the minute,” Strong said. “Investors will want to put money into these types of events, which will spoil the true spirit of surfing.”

The commercial opportunities presented by artificial wave machines are certainly not going unnoticed. Although Slater’s ranch isn’t open to the public, it still hopes to monetise its technology. Outside of professional competition, WSL Holdings harbours aspirations to build holiday parks that offer hotels, shops and attractions, as well as on-demand waves.

While WSL Holdings appears unwilling to divulge how much it costs to run the Surf Ranch, its profitability has already been questioned. According to Tom Lochtefeld, the founder of wave technology firm Wave Loch, the ranch would need to produce a wave every 10 seconds to make money. Similar venues that have opened their doors to the public claim they can produce waves every four seconds. Given the Surf Ranch is only being used for professional events, though, its wave production is likely to be much slower.

The Surf Ranch remains a work in progress. Given time, it’s plausible that costs will fall; even if they don’t, the World Surf League may be happy to take a short-term loss in exchange for the long-term growth of the sport. A 2017 study conducted by academics at the University of Oxford found that good waves are worth as much as $50bn annually. If artificial waves allow inland towns and cities to tap into this market, then the surfing world as a whole stands to benefit.

Open ocean
At present, only a small proportion of people can realistically get involved in surfing. Not only must they live near the sea, but the coastline must also experience the right wind speeds, have a predictable seabed and clean water. Even then, surf-friendly conditions may not be present throughout the year.

With this in mind, Strong conceded that artificial waves will encourage more people to take up the sport: “The development of artificial waves is happening gradually, but already people are starting [to surf] in artificial pools before the ocean, which is sad. But it is part of the sport’s evolution and it will give an opportunity to kids who don’t live close to the sea to experience a new sport.”

Many of the world’s best surfers currently hail from Australia, the US (particularly Hawaii) and Brazil, where optimum conditions can be found for long periods throughout the year. Artificial wave machines would broaden the field, opening the sport to new audiences. And while some professional surfers have criticised their experiences at the Surf Ranch, others have been more positive.

“It’s all new,” said Sage Erickson, an American surfer who finished eighth in the World Surf League’s 2017 Women’s Championship Tour rankings. “I never thought I’d love it this much.”

Surfing will also make its Olympic debut in Tokyo next year, with organisers insisting that events will take place in the ocean. If the sport becomes a permanent fixture at the Games, however, artificial wave machines are likely to become a part of any host city’s winning bid – especially if they are based in a country without access to high-quality natural waves.

It’s unlikely artificial wave machines will ever replace the thrill of being in the ocean and waiting patiently for the perfect wave. In December 2018, British surfer Tom Butler rode a swell estimated to be more than 100ft tall in Nazaré, Portugal, potentially breaking the world record for the highest wave ever surfed. Looking at the breathtaking footage of Butler’s ride, it’s easy to see why many surfers prefer real waves to artificial ones. But in the world of professional surfing, it looks as if there will be room for both.