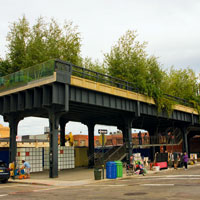 There is an exciting sense of the unconventional, something perhaps even mischievous about walking along the 1.6km-long High Line in Lower Manhattan. Maybe it’s the anarchic pieces of artwork that seem to spring unannounced from many of the industrial structure’s crevices, the spontaneous guerrilla-style gardening or just the fact that you would never usually square up to mottled brick buildings and classy glass condos from such a vantage point. The High Line is an exciting green belt of land that defies gravity and the ciy’s often restrictive grid system to weave amongst the metropolis as a bold symbol of urban regeneration that it seems only a city like New York could achieve with such grace.

The structure of the High Line began life as an elevated freight rail road called the West Side Line, for which construction began in 1925. The line fell into disuse and subsequent disrepair in the 1980s and while much was removed or demolished, the section from West 12th Street, in the Meatpacking District, up to 30th Street, through the neighbourhood of Chelsea to the West Side Yard, remained like a rusty splinter in the side of the city. Yet just as the area was reborn from industrial decay to become a trendy artists’ haven, it only seems fitting that it is this structure –such brazen folly– that ignites everyday banality into something so inspiring.

It was in 1999 that neighbourhood residents Robert Hammond and Joshua David created the community group Friends of the High Line, and thus the idea of turning the old railway structure into an elevated ‘greenway’, was born. Indeed, as architect of the project James Corner explained, the space had to integrate seamlessly – yet spontaneously – into the surrounding buildings. “The High Line had its own mythology long before we came along. In particular, the ‘Friends of the High Line’ were instrumental in creating this distinct image around the High Line – they established an aura that projected an idea that this was in fact a post-industrial artifact maintaining a sense of melancholy and other-worldliness”, he said.

The High Line was finally completed for public use in 2009 and has since become one of those hidden gems that residents of cosmopolitan metropolises love to flock to for a few moments of escapism, or simply for a more interesting commute to work. Today the innovative space continues to be used for performance pieces, art exhibitions and cultural events and has been attributed with spurring somewhat of a renaissance in the area, with 30 new building projects springing up in its midst and crime in the area at an all-time low.