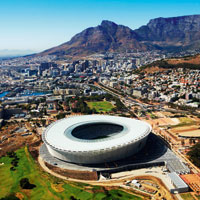 There are sunsets and then there are sunsets. But in my mind not much can beat lounging high up on a secluded deck overlooking the African bush, enjoying a sumptuous picnic dinner and local wines, as you watch the sun set beyond the wandering herds on the Savannah.

Spend a luxurious night up there and you’ll enjoy the sunrise too, looking out over the huge swathes of land that is the magnificent country of South Africa. Washed by the Atlantic and Indian oceans, South Africa is truly a paradise of natural history and so much more.

Whether camping out in the wilds is your thing or you’d rather enjoy the ultimate luxury while experiencing your African safari, the Kruger National Park has it all. The park has a selection of luxury private lodges where you won’t only be spoiled by excellent game viewing, but also by superb cuisine, world-class service and choice South African wines, and even pampering massages and reflexology.

A luxury Kruger safari doesn’t come cheap, but it’s worth every penny. The last thing you’ll be thinking about is money as you swim in the cool water of the pool or relax after a game drive in your lavish tent that’s a thousand miles from your memories of family camping trips as a kid.

All this and wildlife too! In the south of the park, towards the Sabie and Crocodile rivers you can hope to see the best of African flora and fauna such as the Big Five – herds of elephants, lions, leopards, rhinos, and buffalo wallowing in the refreshing water – as well as cheetah and many others. Meanwhile the northern part of the park is often referred as the birding paradise.

After a safari there’s nothing like getting back to civilisation, and the cosmopolitan city of Cape Town is the ideal spot. Filled with a wonderful selection of restaurants and an incredible array of local museums and galleries, there’s plenty to do even when the rain season hits the city.

No trip to Cape Town would be complete without a visit to its most famous landmark, Table Mountain. The cable car to the top is great fun and offers stunning views of the city, but nothing beats hiking the three kilometre trail uphill to the top of this dramatic sandstone plateau that dominates the metropolitan skyline with its distinctive shape that inspired many a myth and legend. The downhill’s a lot easier if you catch the last cable car back!

Having reached the end of the African continent, it would be wrong not to go all the way down to the Cape of Good Hope. Wander among the unique flora and fauna of the world-famous nature reserve, smile at the goofy penguin colony at Boulders, and look out to where oceans meet. Getting in the water can be a little hairy, but a cage dive allows you to get up close and personal to the great white in its own environment without ending up shark food.

Another good thing about Cape Town is that it’s just a stone’s throw from South Africa’s world-famous Cape Winelands around Stellenbosch, Paarl and Franschhoek. Drive three-quarters of an hour northeast to some of the most majestic scenery in the country where you can check out art galleries, stay at winery lodges and blend olive oil amid the vineyard scattered hills and mountains.

Heading out along the southern coast on a tour of the famous Garden Route will have you winding your way up a narrow stretch of South Africa’s eastern coast, pressed against the Indian Ocean by a protective line of rugged purple hued granite and sandstone mountains – the Langeberge (long mountains) and the Outeniqua Mountains. And even if your navigation skills leave something to be desired, the Garden Route is foolproof so there’s little chance of getting lost along the way from Mossel Bay to Port Elizabeth, leaving you plenty of chance to enjoy the ever-changing colours of the imposing mountains, scenic passes, rivers, vineyards and orchards, as well as the multitude of attractions.

A week exploring the Garden Route at a leisurely pace offers an unforgettable adventure. In season (July to December), you can simply sit on a bench and watch whales frolic from one of the most spectacular vantage points in the world at Walker Bay, then head off to be mesmerised by beautiful beaches and pristine forests, visit the Cango Caves and ogle the ostriches.

With all the diversity South Africa has to offer travellers, it’s been aptly nicknamed the Rainbow Nation. Its spectacular and varied land and its friendly people never fail to captivate those who venture this far south.