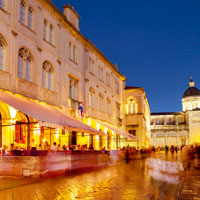 Visit World Heritage sites
When it comes to Croatia, the past associated with this destination offers traditions, monuments, and locales that span a 13-century long history. The country is home to six World Heritage sites that attract a wealth of visitors. Tourists may delight in checking out the old city of Dubrovnik, Plitvice Lakes, the historic complex of Split and the Palace of Diocletian, the historic city of Trogir, the historic centre of Porec and the Euphrasian Basilica complex, and the cathedral of St. Jacob in Sibenik.

Explore national parks
Croatia is filled with natural beauty as it offers access to eight national parks, most of which are positioned about the Adriatic coast. To catch a breath of fresh air and admire the great outdoors, tourists will also enjoy access to ten nature parks and two exciting reserves. For instance, named after the Krka River, you will find a national park situated in central Dalmatian, which is filled with several lakes and breathtaking waterfalls. With a history dating back to 1445, the Roman Catholic Visovac Monastery can also be found inside.

Enjoy a Beach
Whether you enjoy sunbathing or wish to dip your toes in cool and refreshing waters, the beaches of Croatia are often overlooked, but a paradise awaits those who wish to explore. At Krk Island, Baska offers more than 30 beaches filled with pebble-covered sand. Pag Island offers Novalja, which is a private beach providing clear waters with a white sandy bottom. Zlatni Rat can be found on Brac Island, where the local culture blossoms amidst beautiful sea surroundings.

Check out the town squares
Visiting the main-squares throughout a destination allows tourists to learn about the area they are vacationing at. In Zadar, the Forum is considered the pulse of the city that not only features a popular meeting place, but also offers access to a notable spread of Roman ruins. In Split, the Peristil is situated just inside of the Silver Gate. During the summer, a notable festival is held where well-known opera performances take place. In Pula, the Temple of Augustus can be found, which dates back to the second century and now serves as a museum.

Wine and dine
Exploring the cuisine associated with a destination is a great way to learn more about the culture. In Croatia, breakfast consists of fruit brandy, coffee, pieces of bread, and rolls. Around 10am, locals often dine on meals such as stuffed sour cabbage and goulash. Lunch is typically considered the main meal of the day, where a bowl of soup precedes an entree of vegetables, salad, roasted meat, noodles, potatoes, and dessert. This meal is eaten from 10am to the late afternoon.
When it comes time for dinner, a light meal of snack-type selections, such as spicy grilled sausage or smoked ham, is common. In Croatia, coffee enthusiasts will also find delight in their visit because drinking the beverage is viewed as a highly social event. Coffee houses are commonly found throughout the country, open at various times, day or night.