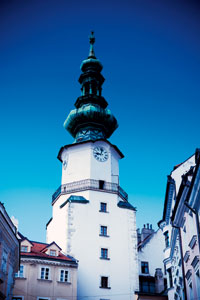 10th century
The Hungarians begin to impose their authority over what was then called the Carpathian Basin, a region in east-central Europe. What is currently Slovakia became incorporated into what would eventually become the Kingdom of Hungary.

13th century
In the late 13th century and early 14th, after a Mongol invasion, various powerful landowners began to vie for land, building castles and separating the population into divisions. Around eight individual territories were formed, governed by powerful aristocrats.

16th/17th century
The Ottoman Empire occupies the Kingdom of Hungary (roughly equal to modern day Hungary). One third of that kingdom – which today is Slovakia – resisted Turkish occupation and became part of the Austrian Habsburg Monarchy instead. Pressburg (the modern-day capital of Slovakia, Bratislava) became, for the period between 1536 to 1848, the capital and the coronation city of Royal Hungary.

18th century
Gradually, the Slovak National Movement began to come forward, partially in an effort to establish a concrete national identity among the Slovak people. The movement began as a largely religious one, but grew to become more all-encompassing over time. Towards the end of the 18th century, the first codification of a Slovak literary language was completed.

19th century
In the Hungarian Revolution of 1848, Slovak nationalist leaders attempted to break away from the Kingdom of Hungary by supporting the Austrians. Decades of division and land struggles followed. In 1896, the concept of Czecho-Slovak Mutuality came to the fore, and support for the secession of Slovaks from Hungary grew.

20th century
After World War I broke out, the Slovaks were more determined than ever to break away the ruling dual-monarchy and form an independent republic alongside the Czechs. Austria-Hungary dissolved at the end of the war. In October 1918, Czechoslovakia was officially formed. After the Velvet Revolution in 1989, which ended communist rule in Czechoslovakia, the state was dissolved and Czechs and Slovaks went their separate ways on January 1st 1993.

21st century
In March 2004 Slovakia became a member of NATO and, soon after, the European Union. Between 2006-2007 the country was elected to a two-year term on the UN Security Council and in 2009, Slovakia accepted the Euro as its national currency.