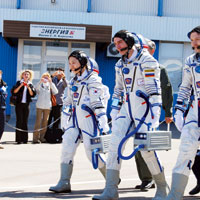 If you’ve ever dreamed of space travel, here is your chance. Journey into the secret world of the Russian Space programme with this one-of-a-kind travel experience pioneered and designed by MIR founder, Douglas Grimes. On this exclusive programme designed for a maximum of 20, guests journey outside of Moscow to Star City, the formerly-secret training facility for Soviet cosmonauts, where today space travellers from all over the world prepare for their flights. Here, travellers can explore the Mir Space Station Simulator, see the Hydrolab where Zero-G training takes place, view the largest centrifuge in the world, and experience the Soyuz – TMA Simulator. (Travellers may partake of optional Cosmonaut training experiences including a Zero-G flight, which Doug has personally taken on two occasions).

Next, participants fly to the steppe of Kazakhstan, to the site of the massive Baikonur Cosmodrome. At this Russian space launch facility, guests have the opportunity to witness the manned launch of the Soyuz spacecraft on its way to relieve the crew of the International Space Station (ISS). Back in Moscow, travellers take in the classic sights such as the Moscow Kremlin and the Terem Palace before witnessing the Soyuz – ISS docking at Mission Control Center, an event that very few have experienced in such a personal way. This once-in-a-lifetime 10-day trip is $13,995 and departs between September 20-29, 2012. Optional pre or post-tour extensions are available. Optional Cosmonaut Training experiences include:

Centrifuge
Experience up to 4Gs on a familiarisation ride on the world’s largest centrifuge, the TsF-18. Simply put, the centrifuge is a long arm with a capsule on one end where the cosmonaut trainee sits. Used for checking and improving cosmonauts’ G-load tolerance, the TsF-18 can be described as a gigantic amusement park ride.

Zero gravity flight
Take the ride of your life on a parabolic zero-G simulation flight. Float, soar, cartwheel and hang weightless in the padded cabin of an Ilyushin-76 military transport aircraft as crew members stand by to assist. One of the most exciting and enjoyable of the cosmonaut training exercises, the zero-G flight puts a huge smile on the faces of everyone involved. This activity requires a minimum of six participants.

Orlan space suit training
Don a Russian-engineered Orlan space suit, created especially for spacewalks. These are the suits used by cosmonauts when they leave the International Space Station to perform experiments or routine maintenance. The Orlan DMA has a rigid torso and flexible arms and is entered by a rear hatch in its backpack. Since it is designed for use in zero gravity, it is extremely heavy, so during cosmonaut training, the suit is suspended from a boom to simulate zero gravity. You will go through an actual training session that the current Cosmonauts and Astronauts perform. Learn to open and close hatches and complete a series of operations designed to simulate typical space tasks. The training will include explanations and preparations, donning an Orlan space suit, performing various tasks and maneuvers, and post-training discussion.

Days 1-2: Depart USA/Arrive Moscow
Depart USA. Arrive in Moscow, transfer to a deluxe hotel. Dine with a guest from the Gagarin Cosmonaut Training Center and admire Red Square at night.

Day 3: Moscow
Visit the Yuri Gagarin Cosmonaut Training Center (GCTC) in the once-classified Star City and now the premier training facility for Russian cosmonauts and foreign astronauts.
Explore the MIR Space Station simulator and visit the Soyuz-TMA integrated simulator and the ISS mock-up. At the massive hydro lab, learn how crews acquire the skills to walk in space. The world’s largest centrifuge, used for simulating G-loads, is on the programme as well. Visit the Star City Museum, containing space vehicles, simulators, space suits and a reproduction of Yuri Gagarin’s office.
Note: Upon arrival, a Star City physician will also conduct physical exams for those who have signed up for the next day’s optional cosmonaut training activities.

Day 4: Moscow/optional cosmonaut training day
Today, those taking part in optional cosmonaut training activities depart for GCTC again early in the morning. The others head outside of Moscow for a tour of the Monino Air Museum, a coveted stop for anyone interested in aviation. Admire the famous Tupelov Tu-95 – a huge Cold War bomber called the “Bear” – plenty of MiGs and Yaks and the largest helicopter in the world, the Mil M-12. Returning to the city, visit the Cold War Museum Bunker, built to withstand a nuclear attack. Enjoy an evening lecture.

Day 5: Moscow/fly to Baikonur
Transfer to Chkalovsky Air Base to board the special flight for launch participants and witnesses going to Baikonur Cosmodrome, on the Kazakh steppe. This evening enjoy a lecture. The giant Soyuz rocket, ferrying astronauts and cosmonauts to the International Space Station, is launched here. Stay at the Hotel Sputnik or similar lodgings.

Day 6: Baikonur
Observe the early morning roll-out of the Soyuz Rocket. Follow the Soyuz to the launch pad site together with the press, military personnel, cosmonauts and their relatives. View the main launch pad, the Gagarin Start, where the Sputnik launches took place, and mingle with the press and other guests. Visit the Baikonur Museum, the Gagarin and Korolev living apartments, and the monument to the dawning of the Space Age.

Day 7: Baikonur
Tour the Buran hangar where the rockets are assembled, and visit the Energia and Proton launch pads. This afternoon enjoy VIP seating at the ISS Crew Press Conference at the Cosmonaut Hotel. Here is your chance to ask any burning questions you may have of the next ISS crew.

Day 8: Baikonur/Launch date of the Soyuz/fly to Moscow
Today is the day of the manned launch of the Soyuz to the International Space Station. Witness the process before, during and after the launch. Experience behind-the-scenes events, including the send-off from the Cosmonaut Hotel, and the Space Crew ready-to-go official report. Then proceed to the special VIP viewing area to witness the power of the launch while rubbing shoulders with generals, cosmonauts, celebrities and journalists. After celebrating the launch, transfer to the airport for the flight back to Moscow.
NOTE: The order of events for all of the days in Baikonur may be moved around to coincide with the launch-time window)

Day 9: Moscow
Begin with a special visit to the Kremlin and Armory Museum, including tickets for a look inside the Diamond Fund. Inside the Kremlin’s fortress walls are palaces, cathedrals, government buildings and the Armory Museum, which houses Russia’s national treasures. The Diamond Fund, by special arrangement, is an exclusive collection of “crown valuables,” jewellery pieces made for the czars and the royal court, including imperial regalia such as crowns and bejeweled scepters.

After lunch, visit the UNESCO-listed Novodevichy Convent and Cemetery. Such luminaries as Gogol, Chekhov, Prokofiev, Eisenstein and Khrushchev are buried here, as well as a number of cosmonauts.

Day 10: Moscow/mission control
Today transfer to Korolev and gather in a VIP seating gallery at Mission Control Center for the live satellite feed of the Soyuz docking. This afternoon – or this morning, depending on the docking schedule – visit the Energia Space Museum, displaying Yuri Gagarin’s original landing module, the spacecraft from which Alexei Leonov took the world’s first space walk, and a full-scale mock-up of the Soyuz-Apollo spacecraft. Celebrate your exploration into the Russian Space programme tonight with a gala farewell dinner.

Day 11: Depart Moscow
The tour concludes this morning with transfers to the airport for flights back to the US. An optional extension to St. Petersburg is also available for those wishing to explore the city. n

More information about this one-off exclusive trip can be obtained at www.mircorp.com