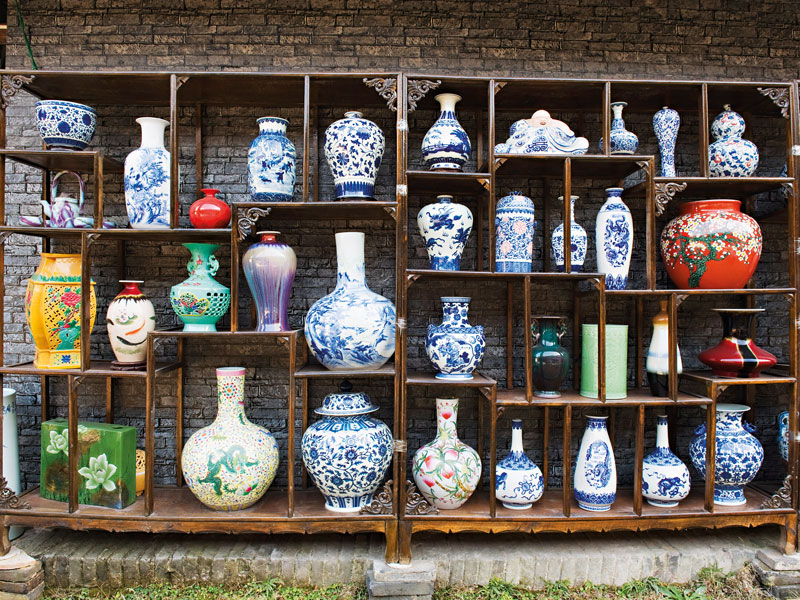 At the height of the Qing dynasty, the phrase ‘made in China’ had very different connotations to today. For many centuries, these words conjured images of illustrious goods like silk, cashmere and porcelain, marked with a deep respect for craftsmanship and heritage.

The global trade of high-class goods has been intertwined with China ever since silk production put the country at the heart of what was the beginning of the luxury industry. For centuries, western merchants would travel the Silk Road in search of Chinese fineries.

In the 16th century, Europeans placed such a high value on Chinese porcelain that Chinese imports came to be known as white gold. Foreigners were in such awe of the product that they would speculate as to how Chinese porcelain achieved its characteristic shell-like shine. Many assumed that sea shells were somehow involved as a secret ingredient. In fact, the name ‘porcelain’ comes from the Italian porcellana, meaning ‘cowry shell’.

Luxury leader to mass manufacturer
The Chinese authority on matters of luxury was demonstrated best in the 18th century, when the first British envoy embarked on a diplomatic mission to persuade the emperor to open up trade to the West.

The envoy, George Macartney, presented the Chinese emperor with gifts designed to show off the finest of what Britain could produce. The emperor was not impressed, however, and the products were snubbed with a letter to King George III, which read: “Our celestial empire possesses all things in prolific abundance and lacks no product within its borders.” The letter came with the clear message that the West could offer China no items worth trading.

In the 16th century, Europeans placed such a high value on Chinese porcelain that Chinese imports came to be known as white gold

In more recent times, a few decades of selling low-cost vendibles have fast-tracked China to economic power, but have also generated a reputation for poor-quality produce. Instead of craftsmanship and heritage, ‘made in China’ has become synonymous with ‘cheaply made’ and ‘disposable’.

This reputation seems to have been absorbed into the Chinese psyche too: in 2014, the South China Morning Post asked more than 200 middle and upper-class Chinese consumers to name their top five luxury brands in order to grasp their taste in lavish goods. More than 95 percent omitted to mention a single Chinese brand, instead opting for big European names like Chanel, Louis Vuitton and Dior.

Maotai, the world’s most valuable liquor company, which is often seen as the most established of Chinese luxury brands, was mentioned by less than one percent of respondents.

A new look
The current climate in the luxury industry prompts the question of whether a homegrown Chinese brand will ever rival established western brands. The answer, according to Giana Eckhardt, Professor of Marketing at Royal Holloway University, may lie with Shang Xia, a Chinese lifestyle brand that is questioning the dominance of European brands by celebrating China’s history as an epicentre of refined design. Its raison d’être is to take on the task of reviving the reputation of Chinese craftsmanship.

Founded in 2008, Shang Xia has expanded gradually and now owns boutiques across China’s major cities. While owned in part by Hermès, the brand distances itself from Hermès’ European roots by celebrating the fact that its products are designed and crafted in China.

“Note it is not called Shang Xia by Hermès, a name that would imply it is a brand extension of Hermès, and the products are not sold in Hermès stores,” Eckhardt said. Taken literally, the brand’s name means ‘up and down’. It was inspired by the phrase ‘inherit the past, build the future’, which influences every product sold.

Customers entering one of the minimalist and understated shops are offered tea from eggshell-thin porcelain cups and are invited to browse a selection of products inspired by China’s cultural history. Items on sale range from clothes and furniture to art pieces, and feature high-end materials such as cashmere, porcelain and silk, the very same products traded by merchants on the Silk Road centuries ago.

Each of the brand’s products harks back to an element of Chinese history and utilises a craft with a rich heritage. “One of the goals of the brand is to preserve Chinese forms of craftsmanship that are in danger of dying, reflected in the bamboo furniture lines, for example,” said Eckhardt.

The process of crafting porcelain bowls, for instance, is a closely guarded secret that dates back more than 1,000 years. Prices vary from expensive » to extravagant, with Ming dynasty-style chairs selling for an eye-watering $5,000.

A new cultural revolution
The idea taps into a wider movement of celebrating Chinese craftsmanship, much of which was played down during the Cultural Revolution of 1966, during which traditional elements of Chinese culture were purged.

Jiang Qiong’er, who founded Shang Xia, was quoted by The Business of Fashion as saying: “There is a new trend that started in the last five years, a new cultural phenomenon, allowing a project like Shang Xia to be born. If Shang Xia was born 10 years ago, it was too early. More and more, the young people, due to globalisation, want a cultural Chinese identity that is contemporary and modern.”

Eckhardt expanded on this notion: “The brand is an investment in the proposition that Chinese consumers will invest in luxury products that represent who they are culturally; an investment in the rise of China as a global leader, aesthetically as well as economically.”

The spirit of the craft
The movement towards resurrecting ancient production techniques goes wider than just one brand. Last year, China’s top brass officially promoted the concept of ‘craftsman’s sprit’, known locally as gongjiangjingshen, by prioritising it in the government’s widely publicised annual work report. Chinese Premier Li Keqiang said that enterprises should work to “foster a craftsmanship spirit of striving for the best”.

The process of crafting porcelain bowls is a closely guarded secret that dates back more than 1,000 years

The official promotion of the spirit of craftsmanship has generated an enthusiastic reaction in manufacturing circles, but has also caught on among the public. The word ‘craftsmanship’ has started cropping up in Chinese media reports, advertisements and internet posts, and has also been the subject of viral videos. Literary magazine Yaowen Jiaozi even included the term on its list of the country’s top 10 buzzwords in 2016.

What’s more, the government has developed a plan aimed at arming artisans with the economic tools needed to turn their craftsmanship into commercial success.

It encourages companies and craftspeople to protect their secrets by furthering their understanding of intellectual property rights and encouraging them to apply for trademarks. Policymakers have also set out to establish a national catalogue of traditional crafts, while also providing grants to those keeping ancient crafts alive.

Xue Jiang of the Central Academy of Fine Arts under China’s Ministry of Education was quoted in The Straits Times as saying: “Since the reform and opening up [in the late 1970s], the focus has been on mass production. Speed and efficiency are of the essence. We’ve since forgotten the old skills of carefully selecting materials, meticulous production and attention to details… We need to return to our roots and promote those traditional skills that have been passed from generation to generation over thousands of years.”

The ‘bling dynasty’
Heritage and craftsmanship are at the heart of almost all global luxury brands, such as Dior and Chanel, but the challenge for homegrown Chinese brands is to forge a link between Chinese crafts and the concept of luxury for China’s consumers.

The Chinese tradition of gift making, combined with new and rising disposable incomes, has made China a huge market for luxury goods. It now accounts for about one third of global sales, and consumes more luxury goods than any other country. Its dominance as a luxury market even granted it the nickname ‘bling dynasty’ from Erwan Rambourg, HSBC Hong Kong’s Managing Director.

Capturing the hearts of Chinese consumers is the first step in the creation of a global brand with a clear cultural identity. “While Shang Xia does have aspirations to become a global luxury brand, it is targeting the Chinese market first.

This is a new approach for Chinese brands; typically they seek to become established as a global brand first,” Eckhardt said. The movement to revive Chinese craftsmanship and to guard trade secrets can only add momentum to this approach.

China already has more examples of ‘intangible cultural heritage’, meaning traditional practices, knowledge and skills, on UNESCO’s official list than any other country. If Shang Xia’s approach is successful, they may rewrite the modern understanding of the words ‘made in China’.