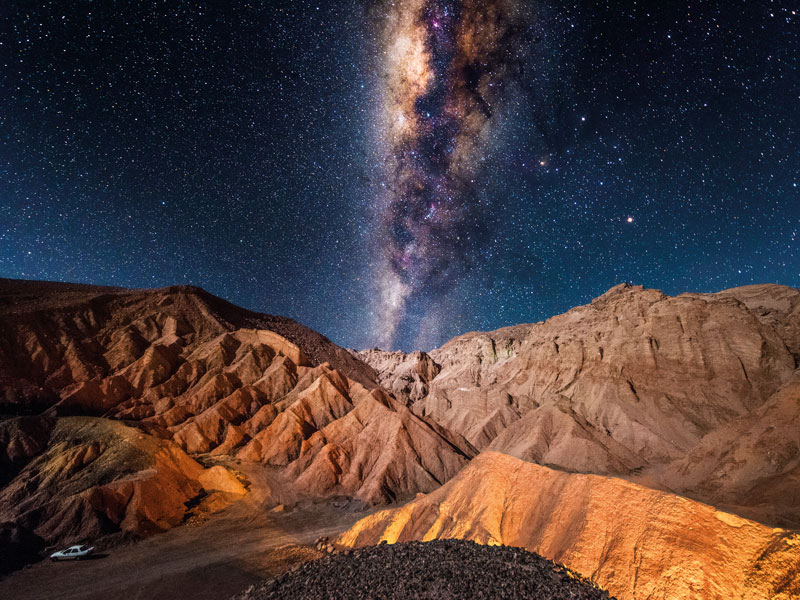 The Milky Way, as seen from the Valley of Death, San Pedro de Atacama, Chile

“Astronomy compels the soul to look upward, and leads us from this world to another,” said the philosopher Plato in his seminal work, The Republic. For thousands of years, the heavens above have inspired awe. As Plato wrote in 381 BC, there is a whole other world up there. Its brilliant shimmer and celestial quality can dazzle any spectator, regardless of age, background, scientific understanding, or lack thereof.

Thanks to today’s super-advanced telescopes, together with the development of infrastructure, more and more people are choosing to travel far and wide to witness nature’s very own light show. And while trips to Norway and Iceland in search of the Aurora Borealis have been popular for some time now, there is another type of astrotourism – as it has now become known – that is fast gaining traction. And at the epicentre of this movement is the sweeping landscape of the Elqui Valley in northern Chile.

Stellar sights
There are certain areas on Earth from which it’s far easier to see the stars than others. Numerous factors come into play for this to be the case, including altitude, location and light pollution. In Northern Chile, and the Elqui Valley in particular, all of these determinants come together to create ideal viewing conditions. At an altitude of some 2,900m and with a temperate climate, the fourth region of Chile, in which this valley can be found, provides the perfect setting for extraordinarily clear skies.

The skies at night are so perfect, in fact, that it’s more than just stars that spectators can witness. “The planets can be seen clearly – even with the naked eye,” said Cristian Ballesta, founder of Astronomical Tourism Chile, the country’s leading point of information on the subject.

“Depending on the time of year, it’s easier to observe Jupiter or Venus. Mars, and Saturn with its rings, can also be seen, but instrumentation is needed,” he explained. “As for the constellations, they are almost all visible except the [Ursa Major], which can only be seen in the Northern Hemisphere.”

Recent developments have raised its profile even further: in August 2015, the site in which it’s located was recognised as the world’s first International Dark Sky Sanctuary. The site was named after the valley’s most renowned former resident, Gabriela Mistral. Mistral was the first Spanish-American writer to be awarded the Nobel Prize in Literature, and her work expresses a deep adoration for these particular skies.

Stretching across more than 90,000 acres, the sanctuary is now classified as one of “the rarest and most fragile dark places left on the planet”, as Dr John Barentine, Programme Manager for the International Dark-Sky Association, was quoted saying in a press release for the National Optical Astronomy Observatory.

Other major research facilities on the site include the Cerro Tololo Inter-American Observatory, the Gemini South telescope, which is one of two optical/infrared telescopes that make up the Gemini Observatory (Gemini North can be found in Hawaii), and the Southern Astrophysical Research Telescope.

Another is soon to be added to the list: the $665m Large Synoptic Survey Telescope, a first of its kind, will produce more light from faint astronomical articles than any other optical telescope on the planet.

Such technological advancements are prompting greater numbers of people to travel to Chile on their own galactic quests. “Great discoveries made by great telescopes are making people more interested in seeing the universe with their own eyes,” Ballesta told Business Destinations. “There has also been more dissemination of astronomical events, such as star showers or eclipses, which produces a greater interest in people.”

Altitude of the Elqui Valley

Sleeping under the stars
In addition to being a global hub for astronomical research, the Elqui Valley also hosts several tourist observatories for novice stargazers. The oldest, Mamalluca Observatory, which opened in 1998, provides one of the most popular expeditions in the valley.

The guided two-hour tour includes an introductory lecture about astronomy, followed by the chance for tourists to observe various planets and constellations with their own eyes. Visitors can also look through a 12-inch telescope so as to see objects in space more clearly.

Naturally, astro-themed hotels are emerging to capture mounting public interest. The Elqui Domos, which underwent a reconstruction in 2011, serves as a perfect example. The hotel boasts nine dome-shaped structures with ceilings that can be removed to reveal the skies above.

As such, guests can sleep under the stars in the comfort of their beds and feel truly connected to nature. Like other hotels nearby, the Elqui Domos also provides sophisticated telescopes for guests to use, as well as tours to the local observatories and talks on astronomy.

Other activities on offer in the area include night treks, horseback riding and culinary tastings under the stars. In the daytime, travellers can visit one of several distilleries in the area to watch Pisco, the region’s world-famous brandy, being made.

Catch-22
According to Ballesta, in the past year alone, more than 430,000 people have participated in some kind of astrotourism activity in Chile, the majority being domestic tourists. As the number of individuals partaking in astrotourism increases, so does the positive impact on the local economy and on the funding of further research and new equipment.

There is a reason why the Elqui Valley is one of the best places on the planet for stargazing – its remoteness is a significant factor, its darkness another. However, electricity is starting to threaten the ease with which constellations can be seen with the naked eye.

Specifically, the fluorescent lights of Vicuña, the small urban centre of the Elqui Valley, have been creeping into the darkness. The population growth of the Coquimbo region, which has seen the number of residents increase by some 200,000 people over the past two decades, only adds to the threat.

In a bid to stop the usual pattern of events, the Chilean Government, with the help of AURA, has issued a series of regulations to control light emissions across the area. For instance, there are power limits to public lighting, and street lamps must be covered to face away from the sky.

After considerable research, energy-efficient light bulbs, tinted to make them less harmful to observation, were introduced, making Vicuña the first municipality in Chile to alter its lighting systems for the purposes of reducing light pollution. New rules were implemented in 2013 to shield neon signs, billboards and LED and plasma screens from the night sky; stricter guidelines for recreational facilities have also been enforced.

The introduction of the new International Dark Sky Sanctuary category in 2015 has further highlighted the need to protect the Gabriela Mistral from electric light pollution. “Night skies are a resource that belongs to all Chileans as an important part of their heritage,” said Dr Malcolm Smith, Director of the AURA Observatory, at the time of the announcement. The move was instrumental in that it also provided a model for astronomical facilities in other parts of the world.

The sky’s the limit
As indicated by the growing number of companies that request to appear on the Astronomical Tourism Chile web portal, the demand for astrotourism is certainly on the rise. Undoubtedly, its burgeoning appeal is part of a wider trend of experience-based travel; the desire to see something completely different and learn something new is becoming more prevalent.

Ballesta agreed: “This type of tourism in special interests is in full development. There are great expectations of growth since in Chile the skies are more suitable for astronomical observation than anywhere else in the world.” It is also expected that, by 2020, the country will host around 70 percent of all astronomical infrastructure on the planet. Consequently, the number of people wishing to witness Chile’s spectacular skies is only set to increase.

And what a wonderful natural resource its skies are – they are a matter of international prestige, an enchanting attraction that lures travellers from near and far, and a platform for economic development.

But as beguiling as Chile’s nighttime treasures are, the government must persevere with its current course of light protection if it is to retain this wonder – not just for the country, but the entire planet. As the world’s most famous astrophysicist, Stephen Hawking, once said: “To confine our attention to terrestrial matters would be to limit the human spirit.”