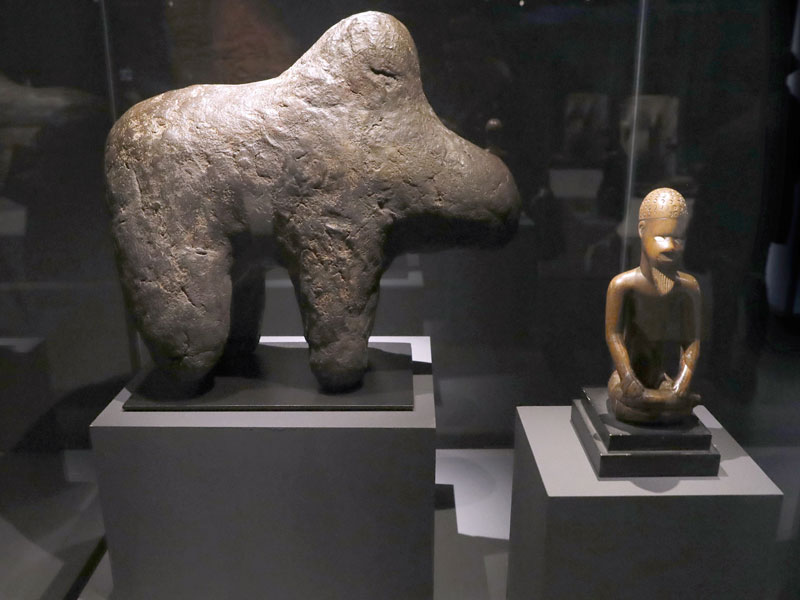 The people of Africa are used to hearing grand speeches from French presidents. In 2007, they had to listen to Nicholas Sarkozy declare that “the African has not fully entered into history”, while François Hollande struck a less antagonistic tone in his 2012 address.

On November 28, 2017, Emmanuel Macron stood in front of a group of students at the University of Ouagadougou – the principal university in Burkina Faso’s capital city – to present his vision for his country’s future relationship with Francophone Africa.

Given Macron’s image as a political outsider, there may have been an expectation that his address would stand apart from those made by his predecessors, but there was still surprise when he announced his commitment to cultural repatriation.

“I cannot accept that a large part of cultural heritage from several African countries is in France,” he said. “African heritage must be highlighted in Paris, but also in Dakar, in Lagos, in Cotonou. In the next five years, I want the conditions to be met for the temporary or permanent restitution of African heritage to Africa.”

While Macron’s pledge has been praised in many quarters, its vagueness has created further questions regarding the process of cultural restitution and what it means for the many artefacts around the world that no longer reside in their countries of origin.

Finders keepers
Visitors to Burkina Faso’s National Museum are treated to a diverse collection of ethnographic and archaeological objects, including ancestral statues, ceremonial masks and traditional costumes. But there are also many items missing. Over the years, objects made by the Nuna, Winiama and Bobo tribes have been stolen.

Many of these artefacts are difficult to trace, concealed in private collections or changing hands on the black market. Others, however, are hiding in plain sight, displayed in the Louvre, the Musée du quai Branly and many other cultural institutions across France.

At its peak, the French colonial empire extended across vast swathes of Africa, including Senegal, the Ivory Coast, Cameroon and Burkina Faso. When French explorers, state officials and soldiers arrived in these countries, they soon discovered a cultural heritage far removed from their own and those of Western Europe.

Like other colonial powers, France claimed many of these exotic treasures for its own, and it’s now estimated that more than 4,500 artefacts of African heritage could be held within the French state.

Specifically, the 1566 Edict of Moulins maintains that objects claimed by the French state will be held in perpetuity. This centuries-old ruling was invoked as recently as December 2016, when the then-French Minister of Foreign Affairs denied a restitution request issued by the Benin Government.

“History is more complicated than the simple Manichean vision that some try to impose,” Debie said. “Few works in museums or private collections come from a war or a punitive expedition. In keeping with the laws as they stand, they cannot be seized and are subject to the principles of inalienability and imprescriptibility. To allow for restitutions, it would either be necessary to change the French code du patrimoine, which I doubt the French authorities will do, or to make exceptional laws on a case-by-case basis.”

Benin’s rejected claim centred on a number of Ghézo, Glélé and Béhanzin treasures that were taken by the French Army when it ransacked royal palaces in the city of Abomey in 1892.

Interestingly, if the artefacts had been seized in 1992 instead, it is highly unlikely France would have denied the request for restitution. But it seems the passage of time is enough to make the looting of another country’s cultural heritage palatable. Indeed, the legal basis for a restitution claim depends heavily on when the item in question was taken.

The UNESCO 1970 Convention on the Means of Prohibiting and Preventing the Illicit Import, Export and Transfer of Ownership of Cultural Property was the first international treaty dedicated to preserving a nation’s cultural property rights.

One of the convention’s main pillars concerns restitution but, as the UN’s operational guidelines point out, it has no retroactive power: “In accordance with the provisions of the 1970 convention… a state party can seek the recovery and return of any illegally exported, illegally removed or stolen cultural property imported into another state party only after the entry into force of this convention in both states concerned.”

Given that many cultural artefacts were taken during the height of colonialism, a period of history long before the UNESCO treaty came into force, the convention offers little help to the states in Africa and elsewhere that are trying to reclaim the heritage they feel has been illegally seized.

Of course, moral values during the colonial period were certainly different to those held today, but that doesn’t make it any less galling when a Burkinabé or Beninese sees their country’s greatest works permanently stored overseas.

All the world in one place
A trip to the Louvre or the British Museum allows visitors to see magnificent exhibits from all over the world. Many of the objects on display will have been acquired through loans or legitimate purchases, but others have a more dubious background.

Still, there is a view that these so-called ‘encyclopaedic museums’ play a vital role in educating and informing their visitors. Works from different places, times and cultures can all be viewed in proximity to one another, allowing them to be compared, contrasted and appreciated in a global context.

Certainly, Debie believes a move to strip encyclopaedic museums of non-national assets would be to the detriment of the entire industry. “Museums that only show local productions, even historical ones, would lose their universal vocation,” he said. “At the Louvre or at the British Museum, it is the genius of humanity that is put in the spotlight and not only local peculiarities.”

Estimated number of African artefacts held by the French state

The Louvre’s visitor numbers in 2017

Certainly, a 19th-century wooden mask made by the Baga people will draw more spectators if it is stored in the Louvre than, say, a museum in West Africa. However, if Africa had access to some of its most famous works, perhaps that would provide a tourism boost to the countries concerned.

Although the premise of encyclopaedic museums may be a good one, their various locations present problems. Invariably, the institutions with the most wealth and the greatest collections of global artefacts are located in Europe and North America. Debie believes that “art must be understood as the heritage of mankind”, but if that view is to be truly embraced, encyclopaedic museums cannot be limited to the West alone.

Returns policy
If Emmanuel Macron is to be respected in Francophone Africa, he will need to show that he is more than just talk. The return of cultural artefacts will have to be handled delicately if he is to avoid criticism both at home and abroad, but there are successful examples for him to follow.

By looking at each repatriation request on a case-by-case basis, objects of historical importance could be more evenly distributed

In 2005, the Italian Government returned the Obelisk of Axum to the people of Ethiopia after possessing it for almost 70 years. Talks are also underway to create a permanent display for the Benin Bronzes in Nigeria.

Encyclopaedic museums are not going to return every object to its place of origin – such a decision would cause too much damage to their own cultural standing – but they could do more to support institutions in parts of the world that have had their heritage looted by colonial powers.

Developing a more extensive trade programme – one that allows museums in Africa to not only display historic artefacts originating from within their own borders, but from elsewhere too – should be a priority.

Security fears are often used in arguments against cultural repatriation but, once again, museums in the West can help alleviate this problem. If France was to assist with curation, object storage and security in its former African colonies, institutions would have greater confidence that repatriated objects were being left in safe hands.

Debie agrees the best way to ensure African people have access to their cultural heritage is to create a stronger partnership network between museums in different parts of the world. Then, by looking at each repatriation request on a case-by-case basis, objects of historical importance could be more evenly distributed.

“Each request is different and must be examined differently,” Debie explained. “But above all, it is collaboration between museums that should give the populations of the countries of origin access to their history, and not restitutions.”

Perhaps the most likely way for African countries to reclaim their lost treasures is reminding former colonial powers of the importance these objects hold to the lands they were taken from. They may just be museum pieces to tourists armed with smartphones and selfie sticks, but to the people who have been robbed of them, they represent their history, culture and identity.