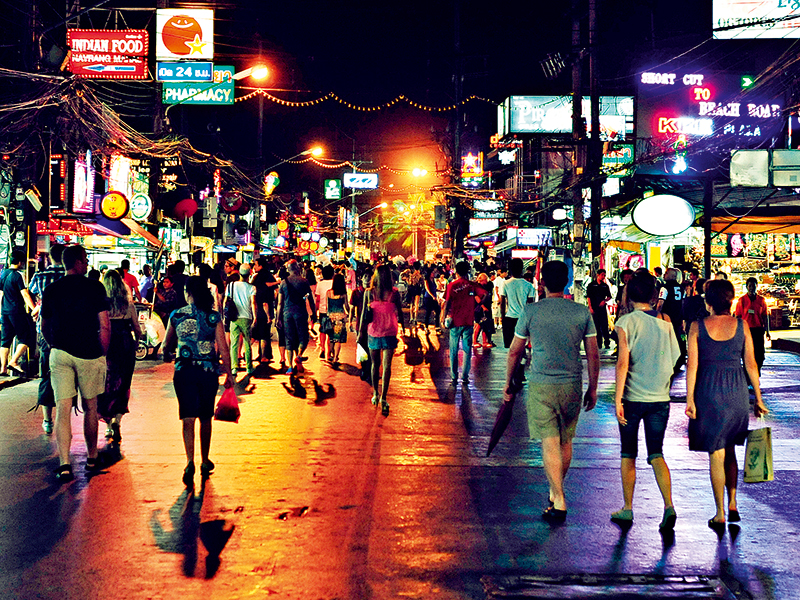 From a vibrant parade through the streets of Bangkok celebrating the launch of ‘Discover Thainess’ to the rollout of a huge television advertising campaign promoting the idea that ‘it’s more fun in the Philippines’, it seems that every tourism board in Asia is launching an initiative to showcase their rich cultures and encourage holidaymakers to visit in 2015. Even China, which already finds itself nestled comfortably in the top five most popular tourist destinations in the world, has kicked off a year of promotions aimed at attracting visitors to its Silk Road; the ancient trade route that links the country with dozens of others across the Euro-Asian continent.

And while the region is likely to see record-breaking visitor levels in 2015 and beyond, its potential stretches even further. However, such promise could remain unfulfilled unless it receives the infrastructure funding boost that it so desperately needs: McKinsey & Company says that the deterioration of housing, energy, transport, communications and water facilities has restricted economic growth by between three and four percent of GDP per year since the early 1990s. The Asian Infrastructure Investment Bank (AIIB), set to rival the IMF and World Bank, is due to begin operations this year and will hopefully bring about noticeable change where it is needed most in the region; with countries such as India, Thailand, Vietnam and the Philippines set to be the main beneficiaries. However, while providing a useful boost, the AIIB’s initial capital of just $50bn will hardly make a dent in the $8trn that the Asian Development Bank (ADB) claims is required over the next decade to bring the region’s infrastructure up to standard.

Untapped potential
There’s never been a better time to snap up the vast opportunities that the continent has to offer. The ADB predicts that Asia will account for half of all global GDP by 2050, and the growth rate achieved by many emerging markets in the region in recent years certainly is extraordinary. Domestic developments, which have been largely brought about by major structural reforms in many of the area’s nations, are likely to offset any negative impact of monetary tightening in the US and stagnation in the eurozone in 2015. Plus, economic growth aside, constantly improving airline connectivity (particularly with regards to a sharp rise in low-cost carriers) and a burgeoning Asian middle class are further contributing factors to a tourism boom in the region.

This explosion has, of course, not gone unnoticed by investors, as drastic improvements to basic infrastructure in these nations are desperately needed to accommodate the growing number of visitors. Rapid urbanisation facilitated by a combination of governmental funding and private investors is taking place, with the Qatar Investment Authority (QIA) as a leading provider of funding to Southeast Asian tourism infrastructure – but in many of these nations, it’s just not enough to keep up with ballooning demand.

Infrastructural shortfalls aside, the World Travel & Tourism Council (WTTC) warned of a ‘talent crisis’ in October 2014, suggesting that many Asian economies have failed to take investment in human capital seriously enough. While the travel and tourism industry is set to create a total of 16 million additional jobs across Asia over the next 10 years, the WTTC is concerned that governments have been too preoccupied with physical infrastructure and therefore neglected the development of talent. In a tertiary industry like travel and tourism, where quality people are absolutely crucial to delivering a quality product, this could be detrimental to its growth. “The region has a shortage of talent to occupy all the job vacancies available in tourism at the moment, and with the expected growth over the coming years, this situation will not improve”, says Mario Hardy, CEO of Pacific Asia Travel Association (PATA).

However, the ASEAN Economic Community (due to come into effect later in 2015) could provide some relief: loosely modelled on the European Union, the panel will be a single market comprised of ten member states, and will, among other roles, allow citizens to move freely between borders without the need to obtain a visa. “ASEAN will present an opportunity for talent to work across borders, and assist with the expected growth”, adds Hardy.

The Golden Land
A 2010 general election brought five decades of military junta rule and isolation to an end in Myanmar (also known as Burma). Since then, various efforts have been undertaken to reconnect the Southeast Asian country with the rest of the world. Its government and tourism board are both keen to demonstrate that Myanmar’s days of forced labour and gross human rights abuse are behind it, and to instead show the world what the richly cultured nation has to offer: beautifully intricate architecture in the form of its famed ancient pagodas and Buddhist shrines, exotic and flavoursome foods, and its diverse and welcoming people.

Aside from a variety of economic and political reforms that have helped make the country a more attractive destination for tourism and investment, the unveiling of its Tourism Master Plan 2013-2020 two years ago – which outlines a total of 38 development projects valued at almost $500m – has brought about significant positive changes. The master plan is aimed at increasing Myanmar’s tourism competitiveness with other nations, protecting environmentally important areas, and safeguarding ethnic communities. Funded by the ADB and the Norwegian government, the scheme’s success so far can be measured by a record-breaking three million foreign visitors in 2014 – a huge 50 percent rise from the previous year. The Southeast Asian Games were held in the capital Naypyidaw in December for the first time in 44 years, and by 2020 seven million international travellers are forecast to have entered the country.

Myanmar’s tourism industry is going into overdrive to keep up with the various wants and needs of its new guests. Many young entrepreneurs are now stepping up to take advantage of the gaping hole in the market, while endless opportunities present themselves to investors and businesspeople alike, as the country still lacks much of the basic infrastructure required to support a bustling tourism industry: public transport can be unreliable and dated, and according to statistics produced by World Internet Stats, just one percent of the population had access to the internet in 2012 – one of the lowest rates in the world.

Further investment opportunities in Myanmar include the development of tourist sites and financial infrastructure – in particular ATMs, which are integral to increasing the footfall of tourists.

“Tourism has played a vital role in Myanmar by reducing poverty, enabling employment opportunities, balancing social and economic development, and implementing political reforms”, reports the Ministry of Hotels and Tourism in its national plan. Nyaung Shwe, a northern town in the Inle Lake region that is celebrated for its immense tranquillity, has seen more than 50 hotels spring up over the past two years, with many more already planned. This is a familiar scene across the country known by many as the Golden Land – and, while this is good news for modernisation and stimulation of the economy, environmental groups have voiced concerns over the impact that a bustling tourism industry and all that comes with it will have on the country’s natural resources. These groups are concerned that Myanmar will not learn from Thailand’s mistakes in its attitude to tourism, which many feel has had a detrimental impact on its cultural heritage and traditions; not to mention its natural landscape.

Maintaining the balance
Pru Goudie, General Manager of On the Go Tours – a travel operator that provides tailor-made tours and packages to professionals and early retirees – says that many of the Southeast Asian destinations offered are slow burners, as demand for hotels continues to outstrip supply, despite seemingly constant construction. The worst affected are Myanmar, Vietnam, Laos and Cambodia, all of which have become increasingly popular destinations in recent years. “Myanmar in particular is massively over-subscribed, and hotels are the central issue. We would undoubtedly be able to sell more packages if there were more places to sleep people”, she adds. Hardy says that Indonesia and Malaysia are particularly hot locations among international tourists at present.

However, finding the balance between urbanisation and authenticity is imperative to maintaining the appeal of the region to international visitors. Goudie says that while her clientele are by no means looking for budget holidays, they are more interested in authentic experiences than five-star hotels and Michelin-star food: taking part in a cooking lesson, or receiving a guided tour from an experienced local, are both increasingly popular activities. “For us it’s more about the cultural experience. While it’s nice to have a soft landing at night, we never go the whole five-star route, because it’s not really what our clients are interested in.”

While perhaps not the first place that springs to mind when summoning thoughts of rapid economic progress, Vietnam is in fact one of the fastest-growing economies in the world. According to World Bank, real income has grown 7.3 percent per year over the past decade, and in the fourth quarter of 2014 the country achieved an admirable 6.19 percent of GDP growth. And while it has long been a popular destination for backpackers, tourism in the 13th most densely inhabited country in the world has exploded in recent years. In 2014, 7.9 million international travellers visited the country – in 2000 that number stood at just 2.1 million. This influx of visitors has seen it gradually metamorphose into a more mainstream destination for older, wealthier travellers seeking a more luxurious holiday experience; presenting opportunities aplenty for high-end hotel and restaurant owners.

Strategic location
Commercial tourism is not the only industry undergoing a period of rapid transformation in the region. Worldwide growth in the MICE sector is strongest in Asia, having grown by 133 percent over the past six years, according to the MICE Agency, compared with the global market rate of 19.9 percent. Strategically located on several trade routes that conveniently connect it with Europe and beyond, the Asia Pacific region – and Southeast Asia in particular – is an increasingly attractive location for MICE events. At present, Indonesia is ahead of the crowd in terms of growth, with popular tourist destinations Bali and Jakarta being particular favourites. The country ranked 37th in the International Congress & Convention Association’s (ICCA) 2013 rankings, ahead of many significantly more developed countries. Meanwhile, the Philippines and Vietnam placed 49th and 50th respectively.

In that same year, MICE tourism contributed 40 percent of total foreign tourism in Indonesia, and IndoMice 2015 – scheduled to take place in May – is likely to stoke significant interest in what the country has to offer. With a goal to reach 20-25 million international tourists by 2019, the Indonesian Tourism Protection Board is placing a heightened focus on developing the MICE tourism sector. And, as an increasing number of countries in the region recognise the potential generated by their opportune location, more events of its kind are emerging.

The inaugural MICE Asia Pacific Exhibition 2014 drew significant interest into the region, from trade professionals and corporate buyers alike. Ultimately, the biggest problem facing MICE growth in Asia at present is the lack of accurate and consistent data. If this was available, both the government and its developers could correctly identify the needs of the market and progress accordingly.

Despite the gap in tourism infrastructure, Southeast Asia’s breathtaking scenery, varied climate and diverse and exciting cultures continue to attract record numbers of tourists. With these figures only set to increase as facilities improve, it’s clear that regional competition has only just begun.