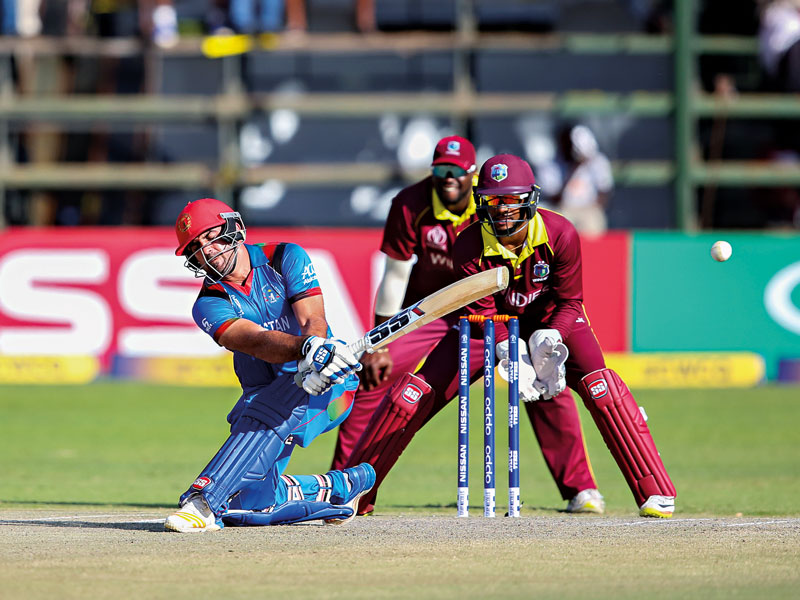 Cricket is not the most accessible of sports even for the casual observer; at the highest level, it is nigh on impenetrable. Until a few months ago, in fact, only 10 countries had ever played Test match cricket – the longest and most challenging form of the game.

Despite being the second most popular sport in the world, according to World Atlas, and possessing origins stretching back into the late 16th century, cricket – particularly the Test arena – has long been an exclusive club.

However, in May, Ireland became the 11th nation to pull on its whites. Afghanistan joined them the following month, playing its first Test match against India in Bangalore. For the Central Asian country, achieving Test status represents the high point of a remarkable, and rapid, rise.

Early on, Afghanistan often had to rely on kit donated by English county teams – but this adversity created a determined streak within the players

Prior to the 1980s, cricket was little known in Afghanistan and, even as recently as 2008, the country’s One Day International (ODI) team was competing against the likes of Jersey and Vanuatu in an ultimately unsuccessful attempt to qualify for the 2011 Cricket World Cup. Today, Afghanistan stands alongside a select group of cricketing nations; the citizens of this war-torn country can be hugely proud of a team that has truly upset the odds.

On the up
The story of Afghanistan’s cricketing rise begins in difficult circumstances. The Soviet-Afghan War of the 1980s resulted in more than 500,000 civilian deaths and the displacement of millions more. Across the decade, in fact, more than half of all the world’s refugees were Afghans.

Surprisingly, the genesis of Afghanistan’s cricketing success occurred during these dire times. Many of the people displaced by the war fled across the country’s eastern border, ending up in Pakistani refugee camps. Nihar Suthar, author of The Corridor of Uncertainty: How Cricket Mended a Torn Nation, told Business Destinations that it was here that many Afghans fell in love with the game.

“Refugee camps were incredibly important to introducing Afghans to the sport,” Suthar explained. “Approximately 3.3 million Afghans relocated to Pakistan in the late 1980s and early 1990s due to the violence in their country. Many of these Afghans were in refugee camps. As a result, when Pakistan won the Cricket World Cup in 1992, the craze affected all the Afghans in the refugee camps, and cricket took off.”

From these small beginnings, the Afghanistan cricket team has gone from strength to strength. A national cricket federation was eventually founded in 1995; in the years since, the national side has qualified for two Cricket World Cups and three World Twenty20s. Along the way, there have certainly been difficult moments – early on, Afghanistan often had to rely on kit donated by English county teams – but this adversity created a determined streak within the players.

“The only motivation that the Afghan cricket players ever had in the early days of their team was playing for passion,” Suthar said. “They had no money. In fact, they had to make several sacrifices to play cricket. When teams face extreme uncertainties and play purely for passion, they can indeed accomplish amazing things.”

Becoming just the 12th nation to play Test match cricket in more than 140 years would be noteworthy for any team. However, considering the many challenges the people of Afghanistan have faced recently, it is truly extraordinary.

While some nations have been playing cricket for years without making much impact on the world stage, the Afghan team has reached the upper echelons of the sport in just over two decades. What it might ultimately achieve depends only on maintaining the same determination that has got it this far.

No place like home
One of the factors standing in the way of Afghanistan continuing its meteoric rise is the country’s ongoing security problem. Although the situation may not be as hopeless as it was during the height of the US invasion, terrorist attacks remain a part of daily life in the country. The capital, Kabul, saw more than 100 people killed as a result of terrorist attacks across March and April this year alone. Cricket has found that it is not immune to such atrocities.

The number of nations with Test match status

On May 19 this year, as hundreds gathered within the Spinghar Cricket Ground in Jalalabad, a deafening sound erupted – one that is all too familiar to the Afghan people. Three bombs had exploded shortly after one another, resulting in eight deaths and injuring at least 45 others. One of those killed was Hedayatullah Zahir, a respected figure in the local community and the match’s organiser. He had hoped to use cricket as a way to “demolish insurgency darkness with peace”.

Unfortunately, the attack is not the first time security issues have blighted cricket’s growth in the country: back in 2013, local thugs demanding a ransom of $2m kidnapped the father of Mohammad Nabi, the then-captain of Afghanistan’s ODI team. These incidents are not only distressing for the individuals involved, they make it hugely difficult for cricket to develop further in the country.

When Ireland played its inaugural match against Pakistan in May, it did so in front of a small but enthusiastic crowd in Malahide, a town just north of Dublin. For Afghanistan’s first match against India, the current security situation stipulated that the game had to played away from home. In fact, there is little prospect of Afghanistan playing a game in front of its own fans for the foreseeable future.

The situation mirrors that of Pakistan, whose cricket team has been unable to play home matches since 2009, following a terrorist attack on the visiting Sri Lankan team. Instead, Pakistan has been forced to set up a temporary home in the United Arab Emirates. The team’s exile has come at a great cost – both emotional and financial – with the Pakistan Cricket Federation having to pay $50,000 a day to rent stadiums in the UAE any time the team plays a match, according to The Telegraph.

Although it is plausible that international cricket may return to Pakistan in the not too distant future – a World XI did play a Twenty20 series in Lahore last year – such prospects do not exist in Afghanistan. The Taliban retains control over large sections of the country and hostilities between the Islamist group and government forces are commonplace. In such a climate, no international cricket team would consider touring the country.

Being unable to play games at home may seem trivial compared with the adversity the team has already overcome and, as Suthar notes, India, where Afghanistan’s ‘home’ matches are likely to be played, “is close enough for some Afghans to still be able to go and support the national team”. Still, the situation is far from ideal and leaves the cricket team cut off from passionate support, while local people are separated from the sport that they love.

Building a partnership
Afghanistan’s first Test match against India may have been a celebration of the team’s progress, but events on the pitch showed how much more work there is to be done. The match was barely a contest: it was over in less than two days, with Afghanistan losing by an innings and 262 runs.

Playing more Test matches will help bridge the gap between the Afghan team and the world’s best – although this will present its own challenge. Afghanistan is currently scheduled to play 13 Tests between now and 2023, far fewer than the likes of Australia, England and the rest of the sport’s biggest nations. The Afghanistan cricket team is being asked to play catch-up by playing less.

India, however, has shown a willingness to support Afghanistan. As well as agreeing to host the country’s first Test match, it has also offered financial assistance to the neighbouring country. In February, the Indian Government committed to investing $1.7m in the development of cricket infrastructure in three Afghan provinces: Logar, Kandahar and Balkh. The money will not only help with the game’s growth; by providing a path away from crime and terrorist insurgency, it could also improve regional stability.

Greater investment is not the only thing Afghanistan needs if it wants to improve its prospects against the sport’s best. According to Nihar, improving the team’s consistency is essential. “Sometimes, they will pull off miracle victories,” he said. “Other times, they will play like they are still a Division Five team. I think the consistency of how they perform has to continue to improve if they want to be a top powerhouse contender.”

Sporting bodies could also work harder to ensure that cricket reaches more Afghans: despite the game’s popularity, it is predominantly played by the country’s Pashtun community. Reaching out to minority groups, such as Hazaras and Tajiks, should be a priority if cricket is to become a truly national sport. Women too must be empowered to play the game without fearing reprisal from conservative religious groups.

If the Afghanistan Cricket Board can continue to develop the game and broaden its support, there is no reason why cricket cannot act as a unifying force in the country. For a nation that has been racked by division over the last 30 years, that would be a true sporting success story.