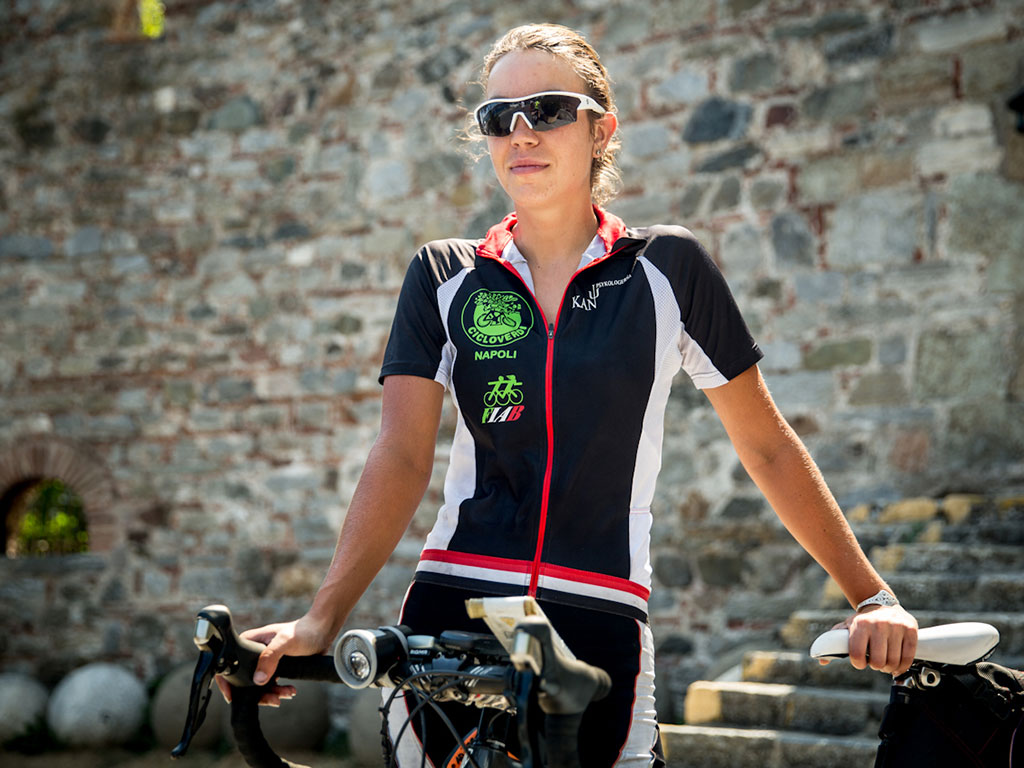 Guinness World Record holder for the Fastest Circumnavigation of the World by Bicycle, Juliana Buhring

The first woman to cycle around the world and author of an internationally bestselling book, Juliana Buhring is an inspirational figure. In 2012, Buhring cycled 29,064km, covering four continents and 19 countries. Of the 152 days it took her to set the Guinness World Record for the Fastest Circumnavigation of the World by Bicycle, 144 days were spent pedalling.

Prior to her decision to circumnavigate the world, Buhring barely cycled. Despite resounding discouragement from those around her, she trained for eight months on an ordinary bike, immersing herself in the world of fitness and endurance. She was not a professional athlete, but she was determined. Wanting to test – and prove – that ordinary people are capable of great things, Buhring set out without sponsorship, financial backing, or technical and medical support, on a basic road bike.

“I’m a very normal person. I don’t think [what I’ve done] is amazing. I think everyone has the ability to do a lot of things and they just don’t; most people never find out what they’re capable of. It’s fear of failure of fear of consequences,” said Buhring.

The challenge to cycle around the world
In order to qualify for the title, Guinness World Records requires the rider to cover 28,970km – the world’s circumference – by bike, passing through two antipodal points. The ride must commence and end in the same location and must not deviate more than five degrees off course. The same bicycle must be used throughout and the clock does not stop on any occasion.

Her endeavour was financed only by the online donations of friends and supporters. Despite almost running out of money along the way, as well as being chased by a pack of dogs, attacked by magpies and encircled by an Indian mob, Buhring was determined to complete her goal. From a broken gear shifter, 29 flat tires, six broken spokes, four serious falls, and a broken pedal, to a smashed iPhone and nearly freezing to death in a New Zealand mountain pass, Buhring came to know the meaning of ‘endurance’.

Yet some of the endurance was more mental than physical. Talking about her cycle through the Australian desert, Buhring said: “It was the most mind-numbing part of the cycle. It’s the world’s longest straight road and there are no trees.”

“I didn’t know there was a border you pass through right in the middle of the Nullarbor. So I had brought this pack of fresh oranges to take with me through,” Burhing added.

“There was this big woman just waiting [at the border] and she was like, ‘You’re not bringing those oranges through my border.’ She took my oranges. I knew they were like gold out there and she was having them for lunch, so I took them right back from her and I was like, ‘Fine! I’m eating them right now!’ And I stood in front of her, peeled and ate all of them while she glowered over me. It was great!”

After the Guinness World Record
In 2013, Buhring hit the road once again, this time in the Quick Energy Transcontinental Race. Considered Europe’s longest and most difficult unsupported bicycle race, it spans from London, through the Alps, finishing in Buhring’s favourite cycling location, Istanbul. Buhring was the sole female cyclist in a host of 31 riders.

The competitors are required to cycle alone, reliant on what they can carry or access from publicly available services along the way. They are not permitted to arrange any support prior to the race and must pass through several checkpoints. Additionally, the participants are permitted to choose their resting points, if they decide to rest at all.

In another triumphant feat, Buhring placed ninth, cycling 2,420km in just 12 days and two hours. When asked where she gets her rushes from now, Buhring recounted the similarity between meditation and endurance cycling. She also enjoys archery and sea kayaking off the coast of Italy. As for her next destination, it has to be Mongolia, exploring the entire country by bike, foot or horseback.

A born fighter
Born in Greece to members of the Christian cult the Children of God (now known as The Family International), Buhring spent her childhood moving from country to country, often on the run and without formal education or healthcare. Escaping ‘The Family’ at the age of 23, Buhring found her feet in the wider world.

She attributes her zeal to growing up in such unconventional circumstances. After adapting to life in open society, she hopes other children with similar upbringings will realise their own capabilities. She is on the board of directors for the Safe Passage Foundation, a charity for children suffering abuse at the hands of cults. In circumnavigating the globe, Buhring hoped to raise awareness and funds for the charity, which she continues to support in all her endeavours.

Buhring wrote the international bestseller, Not Without My Sister, with sisters Kristina and Celeste Jones. Together, they tell their tales of childhood suffering in the infamous cult. The book, published in 2007, has been translated into nine languages, including French, German and Dutch.

But Juliana Buhring does not want to be defined by her past; she hates to be characterised as a ‘cult-survivor’ or ‘damaged’ purely because of the environment she was born into. On the contrary, she believes she is stronger and more able to cope with the challenges of life because of her difficult childhood. Her incredible achievements prove exactly that.