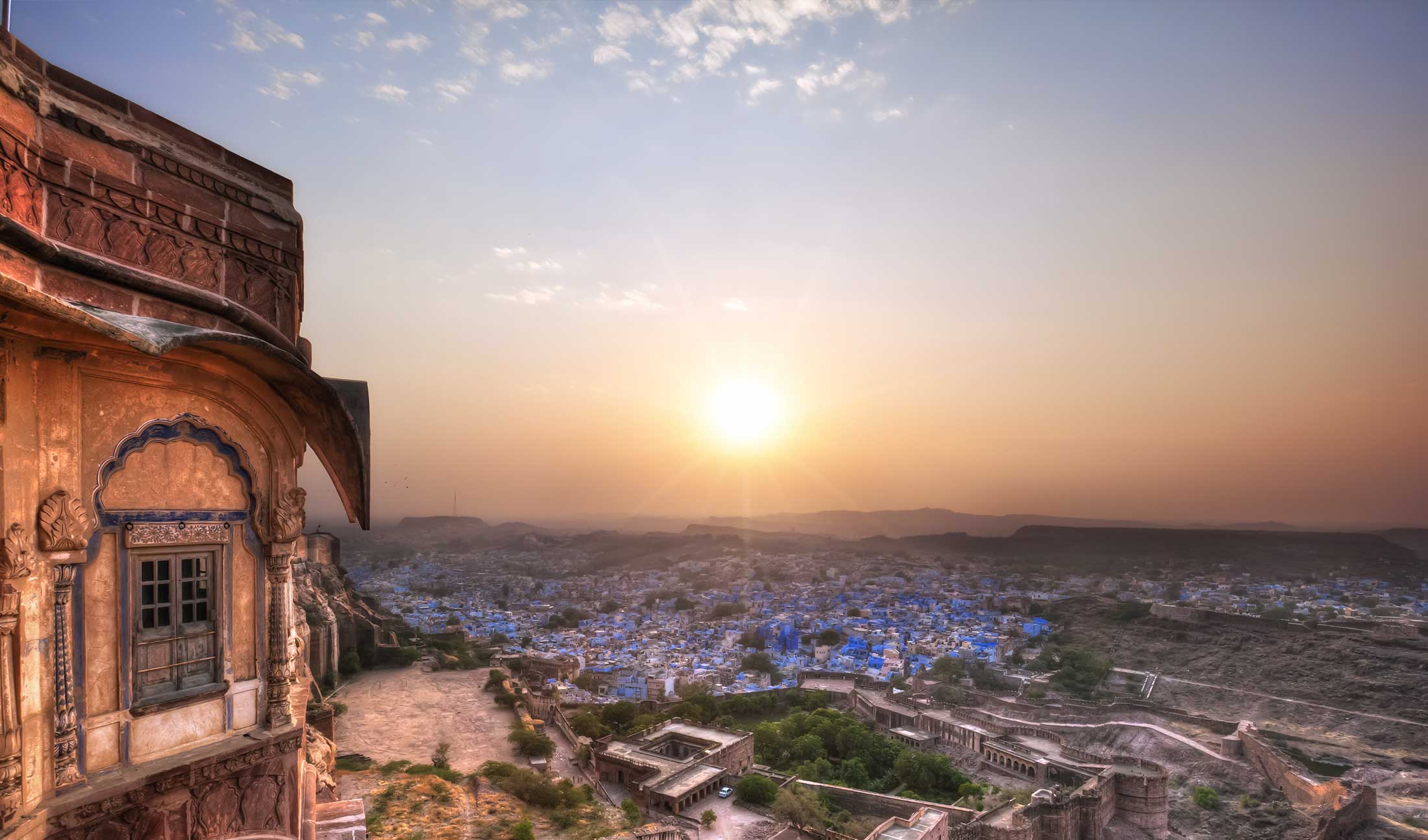 A country as large and diverse as India offers travellers so many different experiences that you could never fit them all into one visit. While all India enthusiasts passionately promote their favourite region as the first port of call, no area epitomises India’s rich cultural and natural tapestry as well as Rajasthan.

The largest state in the country, Rajasthan is known as the Land of the Kings, on account of the many Maharajahs that ruled the city-states within its borders. It encompasses barren deserts, sumptuous palaces, lush rainforests, vast lakes, and soaring mountains. Discounting beaches, every category of dream scenery is covered.

Found to the northwest of the country, it’s a short trip from the capital of Delhi, as well as India’s most famous landmark, the Taj Mahal, in the nearby city of Agra. A trip to either of these sites should include a jaunt around the country’s most spectacular state.

The ideal time to visit is after the baking summer months and before the onset of the monsoons. November to May can get very busy with tourists, but there is enough to see to avoid being swamped by foreign visitors. Getting around Rajasthan could not be easier, with all manners of transport options. The most lavish is undoubtedly the Palace on Wheels train service, which offers visitors their own luxurious cabins, traditional food, and impeccable views of the surrounding landscapes. It is the best way to get to the following essential destinations for anyone wishing to visit this culturally abundant land.

Jaipur: The Pink City
Dubbed The Pink City thanks to its uniquely painted architecture, Jaipur is the capital of Rajasthan and the state’s largest city. Built in the eighteenth century as India’s first planned metropolis, Jaipur is one of the country’s most visited tourist destinations and part of the so-called Golden Triangle, alongside Delhi and Agra. In the northeast of the state, it is just over four hours from Delhi by train. Once there, the usual swarm of auto-rickshaws will do battle for your business, although more comfortable – and reliable – taxis are also widely available.

Few regions boast both remote desert landscape and lush jungle, but Rajasthan has just that in the form of Ranthambore National Park

Littered with historical sites, including the lavish City Palace, Govind Dev Ji Temple, Birla Mandir Temple and the Vidhan Sabha. The city is also home to a number of notable Rajput forts. The magnificent walls around the older city of Jaipur were built in 1727 and encase many of the sites tourists travel to see. Inside the city walls lies the bustling Parkota Market, which fuels the local economy and provides visitors with all manner of trinkets.

It has been written in law since 1876 that residents in the old city must keep buildings painted pink to emulate the red sandstone of traditional Mughal architecture. However, Jaipur spreads far beyond the walls of the old city. Business hotels are springing up to cater for the multiplying tourists; many hotels overlook the nearby Jal Mahal Palace that sits in the Man Sagar Lake.

When you reach Jaipur, look to stay at one of the numerous heritage hotels, rather than a modern build. Leading the way is the nineteenth-century Naila Bagh Palace, which is surrounded by sprawling gardens and was once home to the Prime Minister of Jaipur.

Another popular site is the nearby Amer Fort (also known as the Amber Palace), a stunning red sandstone and marble palace sitting high up on a hill just under seven miles from Jaipur. Lived in by the Rajput Maharajas, the palace is now open to the public and receives around 5,000 visitors each day.

Jodhpur: The Blue City
The dazzling blue rooftops of Rajasthan’s second-largest city, and its location on the edge of the Thar Desert, earn it the dual monikers The Blue City and the Gateway to Thar. Also one of the state’s oldest cities, it was founded in 1459 by Rajputs as the capital to the state of Marwar.

The blue painted houses give the city a distinct and beautiful presence in relatively barren landscape. As with many of Rajasthan’s cities, Jodphur has historic forts and palaces winding up its hills. The largest and most prominent is the Mehrangarh Fort, which the city was built around. In its entire 500-year history the fort was never taken by force, in part due to the 150m-high hill it sits atop.

Within the walls of the fort are many spectacular sites, including the pearl-covered Moti Mahal hall whose stained glass windows bathe the interiors in a spectrum of coloured light. A similarly breathtaking site is the Sheesh Mahal, a hall covered in mirrors. The Zenana Deodi Chowk is a courtyard that lies inside the central part of the palace, with staggeringly detailed sandstone carvings in the walls. Spectacular views of the city can be found at the top of the fort, providing the perfect photograph tourists. Just one kilometre downhill from the Mehrangarh Fort is the Jaswant Thada, a royal cenotaph built entirely of marble and situated on the banks of a lake.

As in Jaipur, there are typical business hotels and expensive international brands. However, looking a little deeper will unveil a number of hotels that occupy once-grand havelis – the private mansions of the region’s wealthiest families. One of the most lavish is the Hotel Madho Vilas, which was built in the early 1940s from red and pink sandstone. Another is the Water Habitat Retreat, by Kayalana Lake. The owners are committed to helping local Marwar villages source safe drinking water through the Jal Bhagirathi Foundation.

Udaipur and Octopussy
Famous as the spectacular location of 1980s Bond film Octopussy, Udaipur boasts one of the most stunning sites in India. Lying in the middle of Lake Pichola is the dazzling white marbled Jag Niwas, a palace that has now been converted into the Taj Lake Palace Hotel. Voted the most romantic hotel in India, the building can only be reached by boat from a small jetty on the side of lake. Now owned by the Taj Group, the palace is not a cheap stay, but the cost is justified by the unique setting. Rooms are situated around a central courtyard that houses a huge lily pond and is covered in orange trees and jasmine, while exterior rooms benefit from direct views of the lake.

As with many of Rajasthan’s cities, Jodphur has historic forts and palaces winding up its hills

Located towards the south of Rajasthan, Udaipur is roughly 350 miles from Jaipur. Easily reached by land and rail, Udaipur’s airport has also recently been upgraded to international status, offering flights from outside the country. As well as the usual throng of auto-rickshaw drivers, private taxis ferry people all over the city, although its small size means walking Udaipur’s winding backstreets is an ideal way of discovering its secrets.

Such has been Octopussy’s effect on tourism, that many bars and restaurants frequently show the film. However, there is more to the city than its lake palace and James Bond trivia. The City Palace, on the shore of Lake Pichola, was built in 1559 and houses most of the city’s historical artifacts. There is also the Jagdish Temple, a notable example of Indo-Aryan architecture from the fifteenth century. Another island on the lake is the Jag Mandir, built during the sixteenth century as a summer resort. It has also been used as a refuge for asylum seekers, but now houses a restaurant and luxurious spa. The short trip up a nearby hill leads to the Monsoon Palace, a resort used by the Maharajahs during the blistering summer months. It also offers excellent views of the city and surrounding countryside.

Jaisalmer’s desert pursuits
Far out in the west of Rajasthan is the desert town of Jaisalmer, known as The Golden City on account of its yellow sandstone architecture and fort, which still houses much of the city’s population. Right in the middle of the remote Thar Desert, the city has a population of nearly 80,000 and is the closest in the state to the border with Pakistan.

Founded in 1156, Jaisalmer has been occupied by many different groups, notably during medieval times when it was conquered by Mughal invaders. As a result, it has a diverse mix of Muslim and Hindu cultural heritage. One of the last regions to sign a treaty with the British, Jaisalmer enjoyed a long history of trade due to its desert location. However, since partition in 1947, the rise in prominence of Mumbai, and the closure of trade routes into Pakistan, it has become somewhat isolated.

The fort is the only remaining ‘working fort’ in India, with plenty of people living and trading there. The crumbling buildings within have undergone extensive renovation in recent years, with many of the intricately decorated Jain temples being restored to their former glory. The primary source of income for the city, however, is tourism, and within the fort’s walls a number of havelis offer accommodation, although there are a good deal of larger – and more comfortable – hotels on the outskirts of Jaisalmer. Access to the city is slightly trickier than for others in Rajasthan, although a dedicated airport is due to open soon.

Nowadays, Jaisalmer provides tourists with the perfect location from which to venture out into the surrounding desert on the back of a camel. Trips can be arranged to vast sand dunes, and camel safaris can last as long as you like. Sleeping under stars in the desert is popular, and a plethora of operators provide accommodation and activities. This can include dune bashing, parasailing and a Rajasthani cultural evening that takes in singing, dancing and a fire-cooked feast.

Ranthambore’s wildlife
Few regions boast both remote desert landscape and lush jungle, but Rajasthan has just that in the form of Ranthambore National Park. Ranthambore is famed for its tiger reserve and wildlife sanctuary and is around 160km from Jaipur, which is where the nearest airport can be found.

Officially a national park since the mid-1950s, it is one of the best places in the whole of India to see tigers roaming the forests. The park is also home to a wide variety of other wildlife, including leopards, wild boar, the sloth bear, hyenas, as well as many reptiles and plants. To discover these marvels of nature, visitors can take part in twice-daily safari rides, which can be booked through one of the region’s many tour operators but, as the park is split into five zones, you might find yourself on numerous safaris to take in the entire range of natural sites it has to offer.

Any trip to Rajasthan would be incomplete without a visit to a local fort, and the Ranthambore Fort is an archetypal example. Built in the tenth century, it sits 700ft above the plains of the national park, and includes beautiful temples dedicated to the gods Shiva, Ganesh and Ramlalji. At the heart of the park lies the vast Padam Talao Lake, and on its banks sits India’s largest banyan tree.

The ideal time to visit is either November or May, when the forests are most lush. Bordered by the Banas River to the north and the Chambal River in the south, it is a far cry from the dusty deserts in the eastern parts of Rajasthan. Plenty of guesthouses and resorts can be found on the outskirts of the park, varying from the basic to the more luxurious, of which the Nahargarh Ranthambhore hotel offers the most high-end rooms.