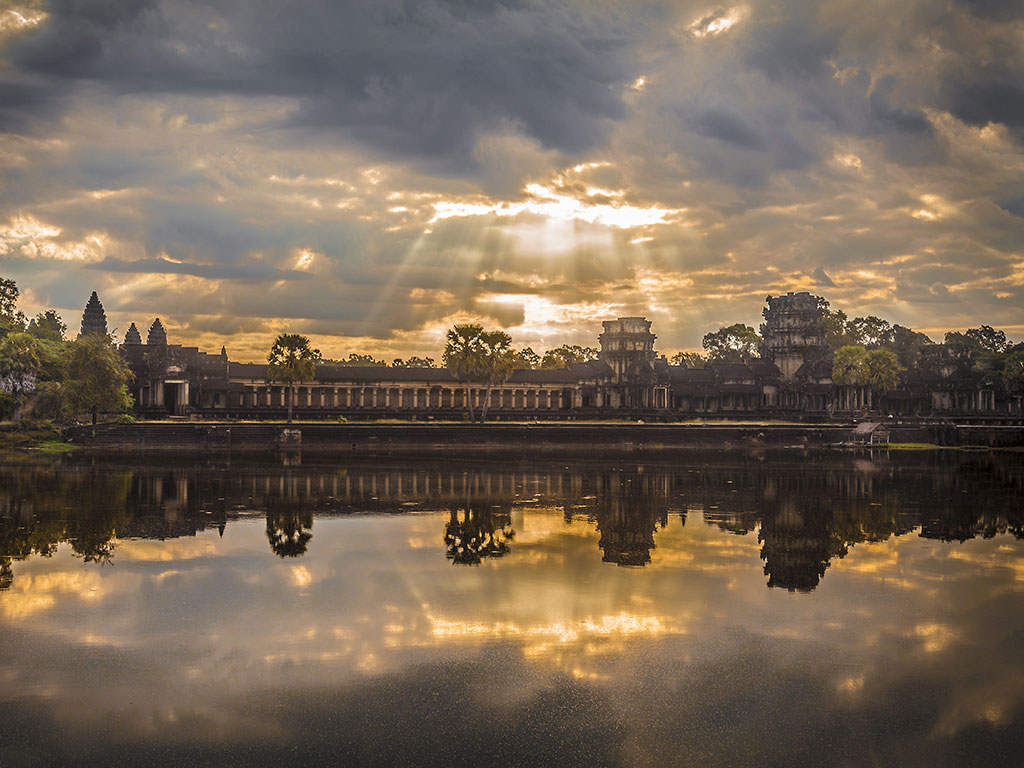 UNESCO World Heritage site Angkor Wat at sunrise. Cambodia is home to many hidden historical treasures, yet is struggling to shake off its reputation as an unsafe tourist destination

A country with such a rich cultural history and diverse natural landscape should have tourists flocking to its shores, but Cambodia has struggled to attract great attention from holidaymakers. Despite possessing stunning tropical locations, affluent tourists visiting southeast Asia have tended to shun Cambodian beaches in favour of the supposedly safer and more developed Thai resorts.

With the horrors of the Khmer Rouge regime still fresh in many people’s minds, it seems travellers to the region believe Cambodia still possesses the dangers apparent during that period and the years following their ousting. If tourists do venture into the country, it is usually just to see the admittedly breathtaking forest temples of Angkor Wat. However, they should not be deterred by such safety concerns, as Cambodia’s beaches, and the resorts near them, offer a beautiful and cheaper alternative to Thailand’s overcrowded options.

Many of the tourists that do visit Cambodia are more often than not the offspring of wealthy westerners, recently released from the clutches of school and undertaking a misguided attempt at spiritual enlightenment. Such trips of discovery usually include the morally questionable acts of firing assault rifles on shooting ranges without a licence and lounging around on beaches in a drunken stupor.

Ready and waiting
Nonetheless, there are plenty of attractions for more mature travellers with a serious interest in the cultural heritage of Cambodia – as well as the crucially important tropical beaches.

Perhaps southeast Asia’s greatest architectural site, Angkor Wat served as the seat of the Khmer Empire that ruled between the ninth and fifteenth centuries. In 2007, the colossal site was proven, through the use of satellite photographs, to be the world’s largest preindustrial city, stretching more than 1,000sq km. Now covered by thick rainforest, Angkor Wat is home to a vast network intricately decorated ruins and is an UNESCO World Heritage site. It is one of the most spectacular marriages of human achievement and natural beauty.

The ruins are located by the modern city of Siem Reap, which is where most of the hotels and resorts can be found. The gateway to the Angkor region, its main purpose is providing accommodation and a base for the many tourists that go to see the nearby ruins. Lacking its own character, it is little more than a jump-off point for the adventures found in the nearby forests.

Not a typical holiday pastime, for mollycoddled westerners eager for a bit of danger in their lives, one of the main attractions Cambodia has to offer is a large number of shooting ranges. Tourists can, for surprisingly small fees, pretend they’re getting ready for battle by firing a vast arsenal of weapons – from handguns to assault rifles, heavy-duty machine guns to grenades. Some places even offer the opportunity to fire a rocket launcher.

The country has a number of tropical beaches that rival any found in Thailand and Vietnam. Comparatively underdeveloped, you’ll still find the comforts that tourists require. The most developed resort at Sihanoukville was built in the 1950s and enjoyed a roaring trade until the late-1970s. Other less developed, but equally beautiful, beaches can be found along the coast, such as Koh Tonsay, Koh Rong, and Kampot.

Remembering the past
For anyone visiting Cambodia, it would be remiss not to visit the sites of some of the worst crimes against humanity in the last century. In the capital of Phnom Penh, one of the starkest examples of this brutality is found at the Toul Sleng Genocide Museum, which was formerly Security Prison 21 under the Khmer Rouge regime.

The site was once a high school, but was used as a prison, interrogation and execution centre by the regime. It is thought that as many as 20,000 people were held there between 1975 and 1979. The barbaric conditions led to all manner of diseases for its inhabitants, and many died as a result. Nowadays, the prison has been transformed into a museum and kept as a reminder of the horrors of the period. The cramped cells have been preserved, with photos of some of the unfortunate victims on the walls as a tribute. While not a happy place to peruse, it does offer tourists a dramatic and informative insight into the country’s past.

Even grimmer reminders of the period are the many mass burial sites around the country that have been dubbed the Killing Fields. The most obvious example is found at the village of Choeung Ek, where mounds of skulls have been collected in a Buddhist monument tower.

Corruption on the border
One of the problems facing the tourism industry in Cambodia is the country’s high level of bribery and corruption. Border crossings in and out of the country often come with hidden costs from unscrupulous officials; stamping out such practices has proven difficult for the authorities, and often deters visitors.

Encouraging investment into the country’s tourism – certainly that outside of Angkor Wat – will be difficult for the government unless it addresses corruption and improves its infrastructure. Shockingly bad roads mean driving cross-country or accessing the beaches are often very uncomfortable affairs. The country also needs to do more to dissuade the international tourist community that it is comparatively lawless and a destination for people not welcome in their home countries.

While progress has been made – visitors jumped from just under 120,000 in 1993 to 2.9 million in 2012 – more needs to be done to properly rival the sorts of numbers that neighbouring Thailand and Vietnam enjoy. For years an ignored blot on the Indochina peninsula, Cambodia is now ready to reap the benefits that tourism can bring to its economy.