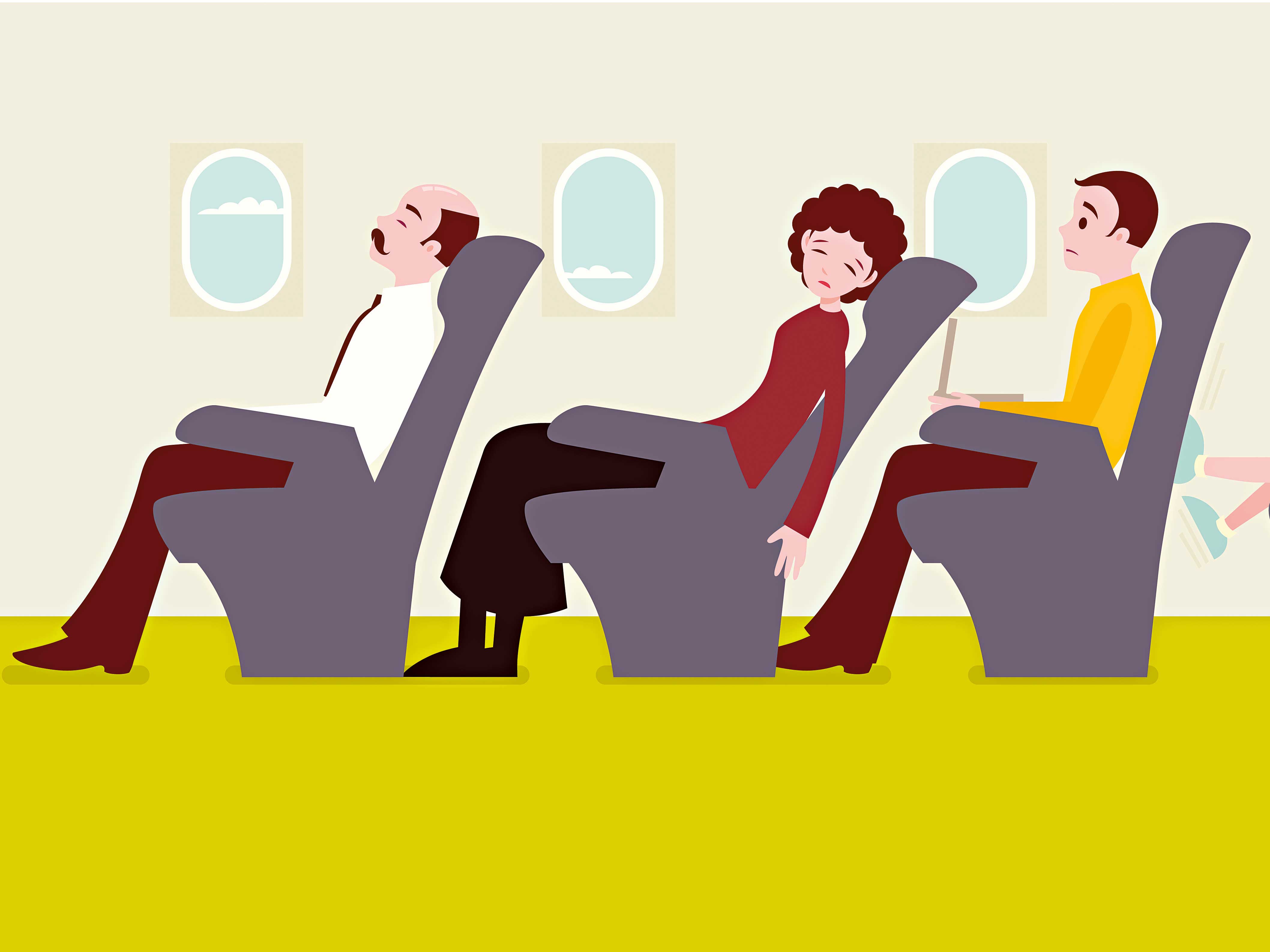 Spending eight hours in a tightly packed, stuffy aircraft cabin is a testing experience for even the most tranquil traveller. We all have our own coping mechanisms, whether it’s an early-morning alcoholic tipple or an escapist scroll through the lacklustre collection of inflight films. And yet, as most of us settle down to quietly make the best of a bad situation, others are making themselves a little bit too comfortable.

As the seatbelt sign turns off, it appears, so do some people’s manners. Carrying around 300 passengers per transatlantic flight, aeroplanes are very public spaces, but certain passengers feel content to make themselves entirely at home. In an apparent attempt to recreate their own living rooms at 35,000ft, passengers can often be found in various stages of undress, loudly munching on snacks and conducting animated cross-aisle conversations with other members of their party. While this behaviour might be considered unacceptable on other forms of public transport, in the air, it seems, anything goes.

No room for feet

Passengers who appear level headed and reasonable at sea level can find themselves overcome with rage when confronted with a mid-flight recliner.

Perhaps these antisocial activities could be forgiven if they weren’t accompanied by the single most offensive inflight occurrence: an unclad foot. These days, air travellers seem to have developed a curious aversion to socks and shoes, brazenly displaying their bare feet to the rest of the cabin.

On recent flights, I have been subjected to naked toes poking through the gaps between seats, appearing at eye level as if from nowhere. I’ve seen bare feet resting on the headrest of the unsuspecting chair in front, and I’ve seen them stretched out needlessly into the aisle. Even when I can’t see the offending foot, I can certainly smell it.

To recline, or not to recline
Of course, any discussion of inflight etiquette is incomplete without mention of the age-old reclining debate. For some weary travellers, reclining is an inflight right, whereas others see it as an unforgivable act of rudeness and personal space invasion. Passengers who appear level headed and reasonable at sea level can find themselves overcome with rage when confronted with a mid-flight recliner.

With more people flying than ever before, inflight feuds over reclining etiquette are certainly not uncommon, with airlines often forced to deal with escalating arguments between passengers. In 2014, brawls over seat reclining saw three US flights diverted in just one week, while four Chinese women were jailed in 2015 after such a row turned ugly.

If the debate wasn’t intense enough, the invention of the Knee Defender has only acted to heighten inflight tensions. The passive-aggressive product is aimed at victims of reclining, and helps to defend their precious legroom. Long-legged passengers need only clip the Knee Defender to their lowered table, and the device will prevent the flier in front from reclining their seat. While the device may have helped passengers to reclaim their legroom, it has come at a cost: flying has never been a more conflict-ridden affair.

With most of us only subjected to these mile-high conflicts a few times a year, it might seem trivial to analyse these behavioural quirks. And yet, our inflight etiquette speaks volumes about the way we have come to regard public space. Instead of respecting the public nature of shared spaces, we have started to convert them into our own private territories.

As we turn our plane seats into our own personal dens, we are resolutely rejecting the ‘in this together’ mantra and are choosing selfishness over solidarity. In order to reverse this sad trend, we must make more of an effort to respect the boundary between public and private. Quite simply, if your comfort makes someone else uncomfortable, then save it for your hotel suite.