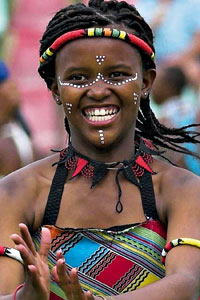 With panoramic views of the azure Indian Ocean, the East London International Convention Centre (ELICC) has placed East London and the Buffalo City region in South Africa’s beautiful Eastern Cape on a firm footing as a competitive conference and incentives destination.

In addition, the conference centre’s proximity to both the new Premier Hotel EL ICC and Premier Hotel Regent mean conference goers have on-site accommodation and top class hotel facilities to make for a seamless conference experience. With a geographic grandeur, the area presents a great travel escape after the meetings are over as the Eastern Cape province is filled with historical depth (it is the birthplace of former President Nelson Mandela), contains a variety of cultures and presents a landscape that traverses semi-desert plains and mountains to rain-forests and long, golden beaches.

The country’s only river port, East London itself is set on the estuary of the Buffalo River which begins its journey in the forested Amathole Mountains and cuts an eastward path across an attractive coastal plateau into the Indian Ocean.

Centrally situated in South Africa, several well-preserved examples of 19th-century architecture enhance East London’s ambiance with traffic snarls and overcrowded city streets an exception rather than the rule while jazz and great cuisine make for a generous nightlife. Along with its sub-tropical weather and sweeping golden beaches, East London is a charming access point to the tourist corridors of the Sunshine Coast and the Wild Coast.

Feet in the Sea
Positioned on East London’s Esplanade, the ELICC has magical views of the Indian Ocean and is only a 15 minute drive from East London Airport, the Industrial Development Zone and all major industries, presenting a fresh alternative to conferencing in South Africa.

Within less than 12 months, the ELICC has won an award as Best Conference Venue in the Eastern Cape, has hosted a boxing world title fight and major conferences from medicine to telecommunications and annual corporate conferences.

Managed by the Premier Hotels group, facilities at the state-of-the-art ELICC include a 600-seater auditorium, an exhibition floor of 1900sq m  and a major hall capable of seating 850 ball-room style and 2,100 cinema-style as well as board-rooms, restaurants and kitchens. The ELICC’s specialised services incorporate a range of technical services including state-of-the-art audio visual equipment, drop down screens, crestron touch panel interfaces, IT services and digital signage.

Interior décor and an award-winning architectural design, meanwhile, reflect both an African sense of place and the cosmopolitan style of international convention centres while a professional team will tailor-make packages specific to any conference, convention, exhibition or even a wedding. Fully secure, the complex also includes undercover parking and adjacent hotels. “In being connected to both the Premier Hotel Regent and the new Premier Hotel EL ICC, I believe the ELICC makes East London a highly competitive and desirable convention & exhibition destination,” adds Samuel Nassimov.

Next door to the ELICC, with panoramic views of the coastline – from sweeping beaches and forested dunes to the pier from which ships emerge from the Buffalo River into the Indian Ocean – the new luxury Premier Hotel EL ICC, has prime position on East London’s Esplanade.

Decorated in a contemporary style, the spacious hotel rooms – from Deluxe rooms to one-bedroom suites with their own lounges – offer unsurpassed sea views.

Apart from its own dedicated boardrooms and fully equipped business centre, the hotel  – and adjacent Premier Hotel Regent – present  themselves as the accommodation of choice for delegates attending conventions at the East London International Convention Centre.

And if relaxing at the hotel isn’t enough, guests can take a breath of air down to the nearby beaches or enjoying a round on superb golf courses, while museums, game reserves and spectacular scenery present an opportunity to explore both the un-crowded Sunshine and Wild Coasts like never before.

South Africa’s eco tourism destination
The success of the Eastern Cape’s Tourism sector as a happening international tourist destination have also seen it pitching to align its ‘Big 5’ game reserves with popular Cape Town and the self-drive Garden Route, affording visitors an African wildlife experience without having to fly to Kwazulu-Natal or Mpumlanga, traditionally the country’s wildlife destinations.

Only 30km from East London, the Mpongo Private Game Reserve is a luxurious and eco-friendly piece of Africa that has remained authentic, idyllic and wild. The malaria-free reserve is named after the Umpongo River, which has played an important part in Xhosa history and is also well known for its hippo tales, being close to where the world’s most famous wandering hippo, Huberta, ended her days after walking hundreds of kilometres down the coast in 1928-1931.

Apart from today’s free-roaming hippo, elephant, buffalo and leopard (lion are kept in a separate area) the reserve also contains giraffe, antelope, wart-hogs and all manner of African wildlife including significant bird sightings. With its rolling hills, plateaus and river valleys, the 3,500ha reserve appeals to the keenest eco-tourist and, being so close to the coast, offers a complete beach and bush experience in the Eastern Cape.

Indeed, Mpongo’s game rangers are expertly familiar with the breathtaking habitat, allowing close contact with the wide array of game on the reserve, taking guest on unforgettable nature drives, walks and horse-rides into the heart of the bush.

On the lodging side, Mpongo’s luxury accommodation offers various chalets and lodges, all equipped with private fireplaces, en-suite facilities, African décor and world-class service while guests are able to see even big game from their lodge decks, thanks to the new conservation-friendly boundaries the park has introduced.

“Our size as a group determines flexibility along with an ability to be very customer-orientated and is something, I believe, which makes Premier Hotels a force to be reckoned with. I believe the hotel & conferencing industry in South Africa is due to undergo unprecedented growth in 2011 and beyond,” adds Samuel Nassimov. As they say in the Eastern Cape: Wamkelekele. You’re welcome.