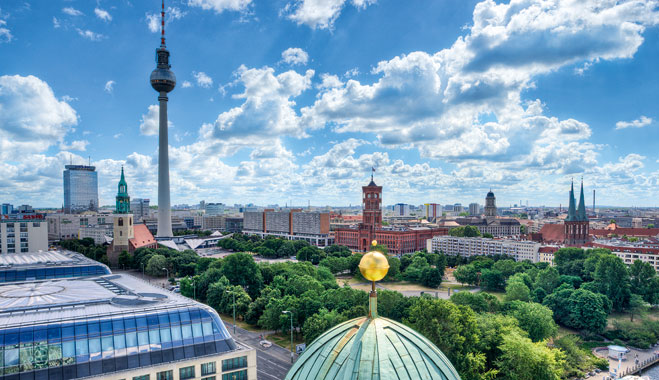 Steeped in its evocative history and the rapid changes that have taken place over the past two decades, Berlin today exerts its own particular fascination. More than twenty years after the fall of the Wall and the reunification of Germany, the capital projects itself as a young, dynamic and cosmopolitan city at the heart of Europe which is constantly re-inventing itself. Boasting everything from art exhibitions to theatre productions the city is also home to three opera houses, around 180 museums and 150 theatres and stages. All in all, more than 1,500 events are staged each day.

Variety is guaranteed, but visitors also come for rest and relaxation. Whether in Tiergarten or on the field of former Tempelhof airport – every district has its ‘green oasis’, which improves the quality of living and allows guests to take a short break.

International event planners especially appreciate the offerings as a convention destination. Berlin boasts Europe’s most up-to-date hotel landscape, excellent travel connections and good value for money. And the city is always changing; railway stations are turned into museums, wall remains into an open air gallery and old factories into multifunctional venues. The choice of special locations ranges from the 368-metre-high television tower to the hangar of former Tempelhof Airport accommodating 5,000 guests. To put it in a nutshell: the German capital convinces as a perfect meeting and convention host.

The congress city
The Berlin Convention Office of visitBerlin is initiator of the congress statistics. This initiative was launched in 2001 as a pilot project and has since provided sound data on the development of the meeting and convention market Berlin. On a half-yearly basis the data is collected and evaluated by an independent market research company in order to serve as a basis for future planning. The specialised collection of all Berlin convention and meeting business data shows excellent event and participant numbers for 2011. A total of 115,700 events took place in the metropolis on the River Spree (+2%). These attracted 9.7 million guests to Berlin (+7%).

Berlin’s hotel landscape convinces through an excellent service quality and high quality standards. This is particularly appreciated by meeting and convention participants and 6.05 million room nights from this group of Berlin guests were counted in 2011. This corresponds to a nine percent increase versus the comparable prior year period. The role of the meeting hotels of the German capital remains strong. A total of 101,000 events were staged (+6%) and 5.9 million participants were catered for (+7%).

On a worldwide level Germany’s capital is amongst the four major locations for association meetings. This is confirmed by the statistics of the International Congress & Convention Association (ICCA) for 2010. With 138 events of international associations the German capital left metropolises like Singapore, London and Sidney behind. The leading destinations in the ranking are Vienna (154), Barcelona (148) and Paris (147).

Future-proof event location
The new Berlin Brandenburg Airport (BER) will be opening on 3rd June 2012. From this day onwards, the entire air traffic for the capital city region will be concentrated in the southeast of Berlin. The new capital city airport is located in the heart of Europe. A starting capacity of up to 27 million passengers per year is planned, but depending on how things develop, the airport can be expanded to cater for as many as 45 million passengers. BER will provide Berlin with many new nonstop connections to destinations within Europe and also worldwide. Lufthansa, for example, plans to increase the number of its nonstop flights from Berlin to 38 from June 2012 – including new direct routes to Birmingham, Manchester, Valencia, Bologna and Geneva. The new airport will provide airberlin with a new home. With its partners, the airline will be offering around 70 nonstop flights and up to 9,500 departures per day from BER Airport, including five long haul connections to the USA and Asia.

The airport’s infrastructure is characterised by the principle of short distances: this means that the six-storey terminal is located centrally between the launch runway and the landing runway; and the railway station is located directly under the terminal building. Using public transport, the journey to Berlin city-centre takes 30 minutes. As well as S-Bahn (tram) services every 10 minutes and regional train connections, Deutsche Bahn (German Railways) will be offering various long distance connections from day one. Bus connections and a dedicated junction on the A113 Motorway guarantee rapid access.

The German capital also continues to gain in attractiveness as a location for large-scale events. By the end of 2013 a new congress and trade fair centre – the CityCube Berlin – will be built on the site of the former Deutschland Halle. Between 2014 and 2016 it will replace the International Congress Centrum ICC Berlin, which will be completely closed and refurbished during that time. With the re-opening of the ICC Berlin, Messe Berlin will then have almost the double convention capacities. At present more than 438 events with around 161,250 participants per year are taking place in the congress area of Messe Berlin.

Berlin Convention Office
During the past eleven years the Berlin Convention Office (BCO) of visitBerlin has offered competent support at the organisation of conventions, meetings and incentives. Customers benefit from the experienced team, a broad network of contacts and the free-of-charge agency in addition to reservation services for hotel allotments.

Being a member of international associations and organisations is a successful way of promoting Berlin and having access to up-to-date data on the worldwide congress market. Therefore the BCO is networked with the International Congress and Convention Association (ICCA), MPI (Meeting Professionals International), Site global, European Cities Marketing, the leading British trade organization EVENTIA and the German Convention Bureau.