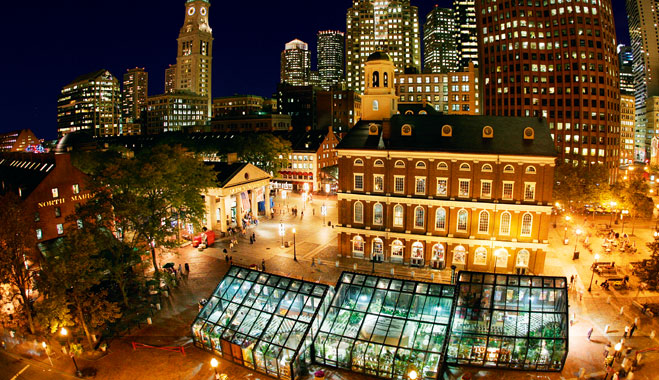 From the downtown core to the outlying neighbourhoods, visitors find that Boston is a city of intriguing diversity. With a mix of colonial charm and urban sophistication, the city is rich in history with great dining and nightlife, extraordinary shopping, championship professional and college sports teams, and a vibrant arts and cultural community, making it a dynamic meeting and convention destination.

Logan International Airport is just three miles from the city and has completed its $4bn modernisation project, including new terminals, new roadways, and a new harbour tunnel that connects the airport to the city centre. In addition, once in Boston, delegates find that the city has excellent access to air, rail, and bus connections. Its two convention centres feature the fastest airport-to-convention centres in the country.

Boston is known as America’s Walking City, but when you can’t get around by foot, the city is easily accessible by the ‘T’, Boston’s public transportation system. And what’s more, planners and delegates find that Boston is a very safe city to move around in.

Culture of excellence
Boston is also a world centre for education, technology and life sciences.

Known also as the “Athens of America,” Boston’s medical and educational institutions have helped to make it an international centre of learning and intellectual activity. The metropolitan area’s 35 hospitals and more than 60 colleges and universities can be a vast resource for your meeting or group. Groups also have access to world-renowned financial and biotech institutions located in the Greater Boston area as well.

Boston & Cambridge offer upscale, international, and eclectic options for the taste buds, and each unique neighbourhood is home to a whole different dining scene. Great new restaurants join the mix on a regular basis, keeping things fresh and cutting-edge. And the area boasts a variety of hotel products to suit the needs of any group – from five-star boutique properties to independent lodgings, to all of the major domestic and international chains – Boston can offer something for everyone.

Breaking with convention
The Greater Boston Convention & Visitors Bureau (GBCVB) strives to continually position Boston as a world-class destination for meeting planners, delegates and leisure visitors. By offering exceptional, award-winning customer service, the staff and the community are able to offer an inspiring and sustainable experience for clients and visitors.

And now, the award-winning GBCVB makes it easier than ever for meeting professionals to meet in the Greater Boston area. No one knows more about the region than the staff at the GBCVB. From assisting with putting together RFPs to sending it out through an online system that distributes the RFP directly to hotels, attractions, transportation companies and more than 1,200 GBCVB members that planners select, the GBCVB sales department will ensure that all of a planners needs are met.

The GBCVB staff can assist planners with: complimentary RFPs for all of your meeting needs, site inspection assistance, attendance building promotions, (including participating in your convention one year prior). Destination collateral, housing services and a concierge and restaurant services desk are also available during your convention

The campaign for international meetings includes participation in major tradeshows such as IMEX, EIBTM, AIBTM and IMEX America, as well as the coordination of sales missions and other marketing and public relations activities. These serve to build awareness for Boston as a meetings destination and help expand overseas air service. These efforts have not only resulted in an increased number of meetings over the past few years, but also an increase in international air services to Boston, including the first-ever none-stop service from Tokyo to Boston that launched in April, 2012.

Two of the major international events that will be held in Boston in 2012 include BIO, the world’s largest annual gathering of the biotechnology industry, which is expected to bring 26,000 delegates from around the world. And in July, Boston will play host to the Global Business Travel Association’s Annual Meeting, providing an opportunity showcase its attributes to corporate meeting planners and travel managers from around the world.

Sustainable commitment
The cities of Boston and Cambridge have invested millions of dollars in cross-sector conservation initiatives that involve massive energy efficiency implementation throughout both cities. Working in tandem with the Cities of Boston, Cambridge and the Commonwealth of Massachusetts, the Greater Boston Convention & Visitors Bureau is committed to sustainable practices. As a result, the GBCVB are able to promote the sustainable efforts of area hotels, restaurants and convention centres making the region very green.

Other highlights of sustainability practices include working with the MBTA (T) to promote the use of public transportation to and from events, as well as the commitment to providing digital and online resources for delegates and planners, thereby reducing printing costs.

For example, the GBCVB now offers an iPhone app for as the Official Visitors Guide to Boston, allowing users to find Great Deals, search the Event Calendar and purchase tickets to many Boston attractions. To help visitors and convention delegates connect with local events, deals and discounts, this iPhone app showcases Boston-area attractions and allows meeting attendees to search “what to do” while they are in town, as well as have the ability to purchase tickets in advance to many of Boston’s great tours, cruises, excursions, museums, the Red Sox and more using their handheld devices.  Delegates can purchase tickets on their mobile device and simply show the page for electronic entry to a number of attractions.

It’s clear that this American city has it all. Whether it’s great dining, world-class shopping, or the vibrant arts and cultural community, it’s easy to see why Boston is the ideal place for any meeting or event.