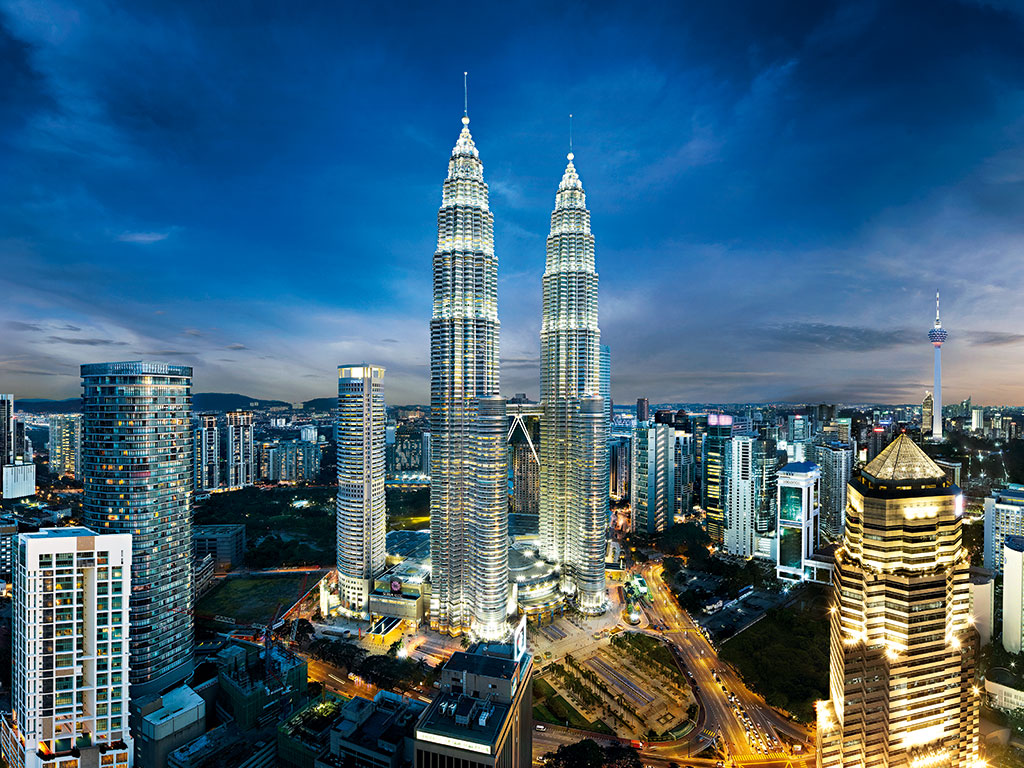 The Petronas Towers in Kuala Lumpur light up the city centre at night. Kuala Lumpur has long been a popular destination for conferences and conventions, but other cities in Malaysia such as Penang are attracting more and more visitors

Diversified, world-class, hospitable and inspirational – these are some of the words frequently used to describe Malaysia as a destination for business events. The country is home to a vibrant mix of cultures and a wide range of natural resources, and is Business Destinations’ Best Destination for MICE, Asia, 2014.

There are many reasons why Malaysia is attractive to international meeting planners and business events delegates. Apart from its strategic location at the centre of south-east Asia, between the booming economies of India, China and the Middle East, arrivals into Malaysia are boosted by easy access into the country. Over 60 airlines provide direct access to Malaysia, from over 100 destinations worldwide. International airport hubs in Malaysia include Penang, Langkawi, Kota Kinabalu and Kuching, with the Kuala Lumpur International Airport providing the main gateway, alongside 15 domestic airports.

Meeting in Malaysia
All around the country, Malaysia is equipped with purpose-built convention centres and meeting venues. The Kuala Lumpur Convention Centre has a perfect fit with a 3,000-seat plenary hall, 22,659sq m exhibit space and ample breakout rooms. It is also undergoing further expansion to cater to a growing demand, with an additional 12,500sq m of meeting space, which is due for completion in 2017.

Malaysia is known for its world-class meeting venues, event spaces and accommodation

Another world-class convention centre is the Borneo Convention Centre Kuching (BCCK). BCCK, which is located in the eco-friendly state of Sarawak, can accommodate up to 5,000 delegates.

Soon to be completed are the Subterranean Penang International Convention and Exhibition Centre and the Penang Waterfront Convention Centre. Both located in the state of Penang, north of Malaysia, it is a sign of the steady growth in business events around the country.

The KL Metropolis development is also in the pipeline. Visionary and designed to support one of south-east Asia’s most iconic developments, KL Metropolis will be located in the upscale Duta area of Kuala Lumpur. The project comprises 22 offices, residential and hotel towers, as well as a landmark tower. Also planned are two retail centres and an exhibition centre. The new MATRADE Exhibition Centre, which is scheduled for completion by 2015, will be the largest exhibition centre with a well-developed floor space of over 90,000sq m.

Alongside its modern convention centres, Malaysia is also known for its world-class meeting venues, event spaces and accommodation facilities, equipped with up-to-date business events technology. According to the Travel and Tourism Competitive Index by the World Economic Forum, Malaysia was the fifth most price-competitive country in the world for travel in 2012, which translates to a wide range of competitively priced accommodation and facilities.

Local brand hotels include the Sunway Resort and Spa, Royale Chulan, The Majestic Hotel, Berjaya Hotels and Swiss Garden Hotels. New properties are also in the pipeline – among them, the six-star St Regis, which is set to open in 2014, Four Seasons Hotel and the world’s first Harrods Hotel. Apart from the capital, other key destinations nationwide such as Langkawi, Penang, Sabah and Sarawak (Borneo) also provide a selection of luxury accommodation options.

Landmark events
As a gateway into Asia, many have chosen Malaysia to conduct their successful conferences and meetings. A number of high-profile events and conferences have been hosted, cementing Malaysia’s status as a world-class destination for business events. One such event was the highly successful World Gas Conference (WGC) 2012.

WGC 2012 was touted as the Olympics of the Gas industry, the theme chosen for WGC in Malaysia was ‘Gas: sustaining future global growth’ and gathered global gas and energy leaders from around the world. The conference attracted 5,299 delegates from 90 countries. The five-day event also recorded 13,803 visitors to the exhibition, including exhibitors from 43 countries.

Malaysia is also well known for its highly developed healthcare policies. This was recently demonstrated when Malaysia hosted the Women Deliver (WD) third global conference 2013 and the seventh IAS Conference on HIV Pathogenesis, Treatment and Prevention. Being conducted in Asia for the first time, both conferences received overwhelming responses. WD 2013 welcomed more than 4,500 delegates and advocates representing more than 2,200 organisations and 149 countries – the highest attendance of leaders and media members for the conference so far.

IAS 2013 was the world’s largest open scientific conference on HIV and AIDS. It was attended by leading scientists, clinicians, public health experts, medical students and community leaders from around the world. The conference gathered 5,220 participants representing 127 countries.

Gracious hospitality
For corporates choosing Malaysia for incentive purposes, an array of unique programmes and activities gives participants the opportunity to experience the whole of Asia in one single destination. With its vibrant blend of Malay, Chinese, Indian and indigenous cultures, reflected in its diversity of food, language, architecture, festivals and lifestyle, it is often said that Malaysia is the perfect blend of Asia. Colourful, festive, and with gracious hospitality, it is a true microcosm of Asia.

Taking great pride in this truly diverse and unique overture, the country is also blessed with awe-inspiring tropical rainforest, as well as some of Asia’s oldest mountains and idyllic tropical islands. Malaysia also possesses historical treasures such as the UNESCO World Cultural Heritage sites and of course the pulsing metropolis of city life. It is no surprise that for the third time running, the United Nations World Trade Organisations (UNWTO) Tourism Highlights has ranked Malaysia as the world’s ninth-most visited country.

Warm Asian hospitality, world-class luxury resorts, hotels and delectable cuisines – with a long historical background contributing to its heritage and traditions, the modern Malaysia has succeeded in incorporating the best of both worlds guaranteed to make business events more memorable and successful than ever. Malaysia is the perfect destination for impactful events at unique venues, which will not just inspire, but significantly add to an experience that is truly Asian.