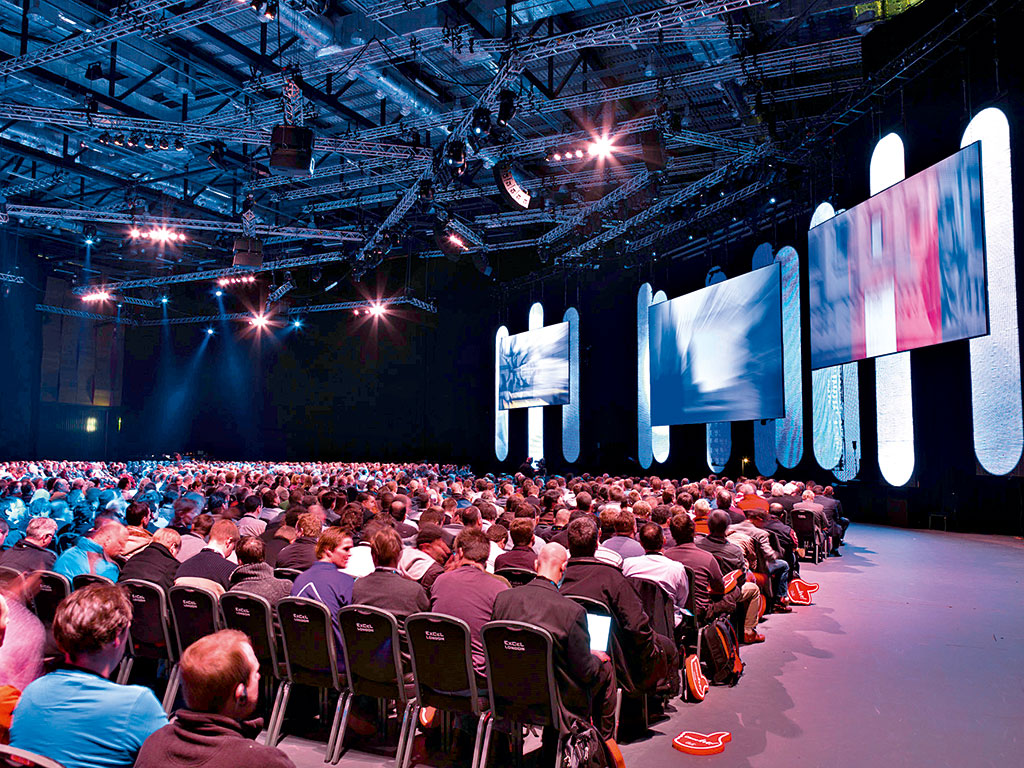 ExCeL London has enormous potential as an events venue, and has played host to

ExCeL London is an exciting and dynamic environment, playing host to more than 4,100 events since it opened in 2000. Visitors from almost 200 countries have experienced everything from sporting events, award ceremonies and conferences, to some of the UK’s leading exhibitions. These have included household names such as Grand Designs Live and World Travel Market as well as events for world-renowned brands such as Cisco and Adobe, government organisations, and trade associations. During 2014 ExCeL London will welcome its 20 millionth visitor.

[I]t is estimated that ExCeL London supports in excess of 31,000 jobs

The venue can host any event, big or small. It has been challenged to showcase helicopters and boats, as well as creating intimate spaces for university and professional institute exams. The ExCeL London site also boasts more than 40 bars and restaurants, seven hotels and a host of additional services.

The venue
ExCeL London is a £560m international venue located on a 100-acre waterside site in Royal Victoria Dock. It is the largest and most versatile venue in London, with an impressive 100,000sq m of multipurpose space. Event organisers are presented with two large halls, two conference centres, 45 meeting rooms and the UK’s largest, fully flexible auditorium.

It’s also home to the capital’s only International Convention Centre (ICC), ICC London, which includes a huge, flexible auditorium and London’s largest banqueting room, the ICC Capital Hall, which can host over 3,000 for a formal dinner. A conference room – the ICC Capital Suite – is also on offer, comprising 17 individual meeting rooms with the flexibility to host breakout sessions for 50 to 1,200 delegates, alongside reception and
registration areas.

Hosting events here is made incredibly convenient by the seven onsite hotels (providing 1,500 bedrooms, ranging in price from budget to four-star, and including a new luxury super yacht hotel); 3,700 car parking spaces; and three DLR stations linking visitors to the London Underground Jubilee line. Only five minutes away, London City Airport offers over 350 flights a day from more than 40 European destinations, as well as New York.

The venue has the additional accolade of being at the forefront of London’s Thames Gateway regeneration and was the most complex venue in the history of the modern Olympic Games when it played host to seven events and six Paralympic events during the 2012 Olympic Games, welcoming 1.5 million visitors.

ExCeL’s green credentials have also come to the fore in the last few years. Developments include an onsite Materials Recycling Facility (MRF) and colour-coded bins for all events. The venue has the UK’s only commercial wormery, which recycles all types of food waste. In 2013, ExCeL sent zero waste to landfill – a first for the venue. Early in 2013, the venue also signed a deal with Cofely to become an energy provider for east London’s businesses and homes. It has also installed Philips LED lights, reducing electricity consumption by 60 percent.

Recent developments
A number of new facilities, upgrades and projects took place in 2012 and 2013. Europcar is now the official mobility partner of ExCeL, giving exhibitors and visitors a hub to either hire or drop off vans, as well as access to chauffeur-driven cars and shuttle buses to and from the venue. The centre also upgraded its 1,100 capacity conference hall – the Platinum Suite – overlooking the spectacular boulevard, to provide clients with a refurbished, flexible space to host a variety of conferences, AGMs and product launches.

ExCeL London understands the growing demands of visitors, organisers and exhibitors for state-of-the-art infrastructure to host a range of emerging technologies that enhance a face-to-face event.

There is free wi-fi across the whole venue. It has four times better coverage and less interference than other wi-fi networks as a result of the Ruckus smart technology that ExCeL introduced in to the building. ExCeL has invested significantly in its IT infrastructure to enhance events with a superior quality of connection and uninterrupted service for cabled connections.

Capital promotion
ExCeL London is popular with both the exhibitions industry and the conference and events market. Part of ExCeL London’s compelling proposition as a venue is the ExCeL Supporters Club. This is a unique collection of complementary businesses such as bars, restaurants, galleries, museums and transport providers, who enable the events teams to concierge the visitor experience by offering a range of activities beyond the conference or exhibition.

ExCeL promotes London as a premier destination for conferences and events. Working in conjunction with our local partners enables us to showcase our city as a world-class destination for face-to-face events. These events in turn generate significant revenue to London and it is estimated that ExCeL London supports in excess of 31,000 jobs.

1855
The Royal Victoria Dock site, now home to ExCeL London, is opened by Prince Albert as a working dock

1981
The dock finally closes for business

1994
The London Docklands Development Corporation launches an international competition to appoint a preferred developer, which is won by the ExCeL London team

2000
ExCeL London opens to the public in November, officially marking one of Europe’s largest regeneration projects

2008
ExCeL London announces plans to increase its event space by 50 percent and include a convention centre with a 5,000-capacity auditorium

2009
London’s first International Convention Centre is commissioned and endorsed by the Mayor of London, Boris Johnson, and promoter Visit London

2010
In May, ICC London ExCeL opens to the public – on time and on budget