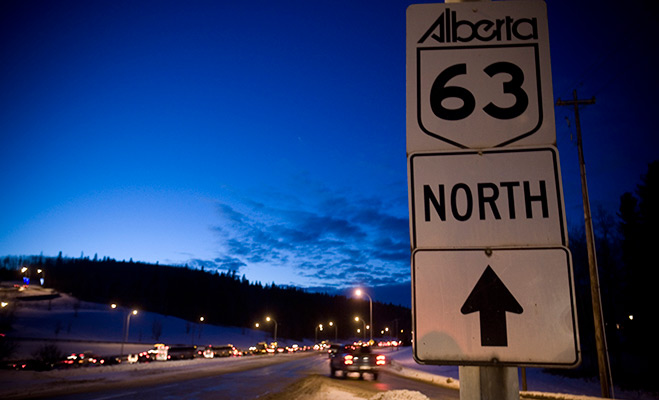 Fort McMurray sits nestled in the northern boreal forests of the Canadian province of Alberta. This oil-boom town, at the convergence of the Clearwater and Athabasca rivers, has a population of over 61,000, which has soared by 26 percent since 2006, as people and businesses flock to the region for opportunities in the petroleum industry. It is located far from any major city, with the provincial capital Edmonton and economic centre Calgary situated around 500km and 800km away respectively. The growth in Alberta’s oil industry has provided huge benefits but has also presented unique challenges to the province and the city, which was first established in 1870 as a Hudson Bay Company trading post.

Petro dollars
Alberta boasts some 171 billion barrels of the world’s remaining oil reserves, about 13 percent of the global total. Only Saudi Arabia and Venezuela are known to have more of the black gold. Most of these reserves need to be extracted from oil sands, a naturally occurring mixture of sand, clay and water, saturated with a dense and viscous form of petroleum. The extraction process is difficult and costly when compared to other forms of oil. According to The Economist, most firms claim the oil extracted requires a market price of about $75 per barrel to break even, although Shell now says new developments have lowered this amount to $50.

Still, with oil prices recovering from their 2009 collapse and an ever-increasing global demand, companies are eager to invest in the province’s vast reserves. According to the Government of Alberta, capital investment in the oil sands between the years 2000 and 2010 reached $116bn and another $218bn is expected over the next 25 years. As of April 2012, there were 101 active oil sands projects with approximately 151,000 Albertans – one in every 14 – employed in the sector.

Alberta has benefited immensely; the government estimates that every $1 of investment yields $7.50 of economic activity. As the province owns natural resources, the Canadian Energy Research Institute also expects Alberta to earn some $350bn in royalties and another $122bn in provincial and municipal tax revenue over the next 25 years. With a population of 3.8 million, it is little surprise that Alberta has the highest GDP per capita of any North American state or province, at $78,000. Taken as a nation state, this would rank it fourth in the world, behind only Qatar, Liechtenstein and Luxembourg.

As such, business is booming. The province registered a GDP growth rate of 5.1 percent in 2011 despite the ongoing global economic malaise. By contrast, total Canadian GDP growth in the same year was only 2.4 percent. Companies have also been attracted to the province by its low personal and corporate tax rate, as well as a lack of general sales and payroll taxes. Labour productivity is the highest in Canada at $47 real GDP per hour worked, compared to a $38.20 national average, making relocation very attractive.

The Southern city of Calgary is already home to the highest concentration of corporate head offices per capita in the country and houses the Toronto Stock Exchange’s Venture Exchange. Canada finances 15 percent of world oil exploration, largely through Calgary, despite it being responsible for only five percent of global production. The Economist Intelligence Unit named Calgary the world’s fifth most liveable city in 2011, while Forbes named it the world’s cleanest city in 2007.

Back in Fort McMurray, residents have an affluent average income of $130,000 per year and 67 percent of homes are owner-occupied. The population is also distinctly youthful, with less than three percent above the age of 64. According to the World Health Organisation, the Regional Municipality of Wood Buffalo, where Fort McMurray is the main city, has been designated as a safe community, a distinction only shared with six other Canadian locations. The city also has an ambitious, well-educated population with 64 percent of residents over the age of 25 holding a post-secondary degree, certificate or diploma.

An inconvenient location
There are many challenges however. Fort McMurray’s isolated location means that transportation links are poor. A single carriageway, Highway 63, connects it to the Calgary-Edmonton corridor where the majority of Albertans live. A series of high profile accidents in recent years have earned it a reputation for danger. While traffic levels aren’t among the highest in the province, the road is traversed by wide trucks, often slowing down other vehicles. Reckless attempts to overtake such vehicles by motorists in a rush to cut through the wilderness could result in deadly, head-on collisions. It can take emergency crews over an hour to arrive at the scene of the crash.

This inspired the Government of Alberta to twin the highway in 2006, giving the area the type of road worthy of its economic clout. In excess of $1bn has been spent on road construction since 2005, including the twinning project, a new five-lane bridge and two interchanges in Fort McMurray itself. Albeit, the project is moving at a snail’s pace, with only 69km of road due to be twinned by the autumn of 2013. Residents have already held protests about the perceived lack of urgency following yet another deadly crash that claimed seven lives.

To make things somewhat easier, Fort McMurray does have an airport where the majority of flights have historically gone to Calgary and Edmonton. And as the economy grows, a greater destination range has become available. Planes now fly to Toronto, Denver and even Puerto Vallarta, Mexico. Private corporate jets have also become a common sight on an increasingly busy runway. Designed originally for 250,000 passengers a year, airport traffic has taken off in the last ten years with numbers increasing by over 900 percent between 1995 and 2011; they were last recorded at 707,907. Luckily for residents and businesses alike, the airport has been given the go-ahead on expansion plans, parts of which have already been completed.

Environmental backlash
Before Alberta’s oil can be utilised it must be transported via pipeline to special coking facilities. Currently, the only significant outlets are in the US Midwest. With strong demand and rising investment, production is bound to outstrip available coking capacity in the near future, risking the formation of an oil bottleneck. Calgary-based firm TransCanada is trying to alleviate the problem with a » new $7bn pipeline to refineries in Texas. The project, Keystone XL, would enable the transportation of 510,000 barrels of oil per day, but political wrangling is hindering its progress. TransCanada expects US President Barack Obama to approve the project in the first quarter of 2013 but it has faced a strong backlash from environmentalists and indigenous people.

Another pipeline project dubbed Northern Gateway is also being proposed by Enbridge Inc and would transport oil from Northern Alberta to the shores of neighbouring British Columbia, before being shipped by tanker to Asian markets. Like the Keystone XL project, Northern Gateway has been subject to many political problems, with the governments of British Columbia and Alberta yet to see eye-to-eye on profit sharing. Indigenous groups also oppose the project, which would cut through their territory. They believe spills would be inevitable and have negative effects on their traditional way of life.

The problems don’t end at pipelines, with the entire oil sands project deemed an environmental catastrophe by green activists. They claim it releases large amounts of greenhouse gases into the atmosphere, seriously harming the natural ecosystems, as well as both animal and human inhabitants. Companies operate large open-pit mines to get at the reserves, creating toxic ponds known as ‘tailings’ in the process. This poisons wildlife and turns the natural landscape into a barren wasteland. Canadian researchers have also found that levels of cancer-causing agents in the surrounding lakes are well beyond natural levels. All this has prompted environmental critics to start a ‘Rethink Alberta’ campaign, encouraging potential visitors to stay away until the government suspends oil sands expansion.

But oil companies and their supporters have hit back. They emphasise that water use in the industry is significantly lower than that of Alberta’s southern farmers, and that the companies are committed to ensuring that land used for mining will eventually be reclaimed. One firm, Suncor, has promised to give $1.2bn to deal with toxic tailings and to work with other companies to clean up the environment. The Royal Society of Canada has also published a report claiming the risk of cancer in communities downstream from the area is supported by “no credible evidence”, despite the increased levels of carcinogens found by other researchers. Controversially, prominent pro-oil sands activists have now launched a campaign promoting ethical oil, arguing production in Alberta is preferable to buying oil from Middle Eastern regimes with questionable human rights records, nuclear ambitions or a history
of supporting terrorism.

A profitable province
For now, Alberta continues to profit from its natural resource wealth but an overreliance on a single economic sector may be cause for concern. Information from Statistics Canada and the Alberta Ministry of Enterprise and Advanced Education says that 23.4 percent of the province’s GDP in 2009 came from the energy sector. On the other hand, this is down from 36.1 percent in 1985, suggesting increased diversification in the economy despite rapid investment in the oil sands. Four non-energy sectors registered the strongest expansion in this period: finance and real estate, business and commercial services, construction, and tourism and consumer services. The combined contribution of these sectors grew from 27 percent of economic output to 40. Overall investment also remains high with per capita rates standing at $18,930 in 2010, nearly double the Canadian average.

Alberta’s government has been keen to promote the advantages of doing business in the province, billing itself as a place with low tax rates, high growth and a skilled workforce. The province’s cultural and touristic profile has also been rising. Calgary hosted the 1988 Olympic Winter Games, and its annual Calgary Stampede – a tribute to the city’s western heritage and cowboy culture featuring bull riding, country music and a carnival – has become one of Canada’s biggest tourist attractions. Residents are likely to point out that unlike the moonscapes of mining in the Northern oil sands, the province’s Banff and Jasper national parks, part of a UNESCO World Heritage Site, are home to breathtakingly picturesque landscapes. At less than a few hours’ drive from many company headquarters in Calgary or Edmonton, a well-deserved break is never far away.