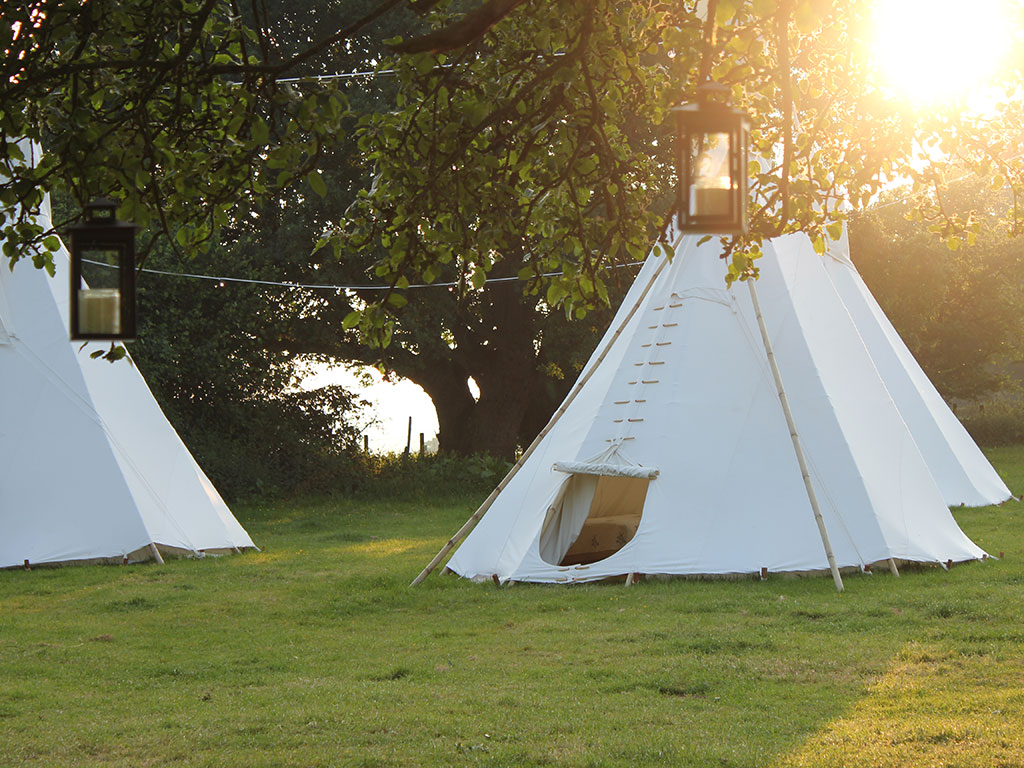 ‘Camping holiday’ connotes a 1970s family adventure in a small field in the middle of nowhere, sleeping in a cramped, basic triangular tent while eating poorly cooked marshmallows and lots of service-station crisps. The idea behind a camping break is to experience the great outdoors, leaving behind the indoor comforts of everyday life.

However, for some – this writer especially – there are certain requirements (or basic living standards) that traditional camping holidays cannot provide, fully functional bathrooms and fresh linen being merely the start of the list. The thought of struggling to rest in a cheap polyester sleeping bag, in a suffocatingly airtight tent, while the rain beats an inevitable hole through the canvas and onto my forehead, is enough to make me never want to leave the comfort of my four-walled home again.

Introducing glamping: A comfortable compromise
Fortunately, camping has evolved since the seventies. It doesn’t have to be the uncomfortable and basic experience it once was. ‘Glamping’ – glamorous camping – companies are sprouting up all over the world, offering luxurious living with the promise of an outdoor experience. Whether in the English countryside, on an African safari, in the barren Jordanian desert, or the beaches of India, glamping holidays can provide an adventurous and unique experience without forfeiting five-star comfort.

The English have embraced the idea of ‘glamping’ with great enthusiasm

In place of budget tents, glamping offers kitted-out versions of pointed tipis or circular yurts – both varieties of tent used by nomadic tribes for many centuries. Most come adorned with traditional decorations, comfortable bedding and adjacent bathrooms. The advantages of glamping over hotels are many. Costs tend to be much lower than in a hotel, and luxury campsites often provide just as much comfort as their four-walled counterparts. Add to this the unique experience of sleeping outdoors and the closer proximity to the natural wonders visitors have come to see. They are also almost certainly more eco-friendly than staying in a normal hotel.

Posh camping holidays are popular throughout Europe, with sites on offer in places including the Pyrenees, Normandy and Brittany in France; Andalucia, Alicante and the Canary Islands in Spain; across Portugal’s Algarve region; and even in the colder Scandinavian countries of northern Europe. Elsewhere, adventurous tourists across Latin America, Asia and Africa often choose to stay in luxury tents when visiting some of nature’s great sites, as opposed to hiking back to a soulless, uniform hotel nearby. These can include the River Kwai in Thailand, the Granite Belt wine region of Australia, the deserts of Morocco, or Panama’s Red Frog Beach.

Safari sanctuary
If lying under the stars while the roars of lions surround you is your thing, then hire a luxurious tent at the Onguma Tented Camp in Namibia. Situated in the heart of the Onguma Game Reserve, the camp is the ideal setting for adventurers that require home comforts after a long day’s safari, while also offering an environment as close to nature as possible. A watering hole just 60m from the seven tents is where many of the reserve’s most exotic animals come to bathe and drink.

At night, full-sized beds can be rolled out under the clear skies to enjoy falling asleep to views of the solar system. All tents also benefit from electricity, so guests can relax in the knowledge that their iPhones will be charged in preparation for the following day’s safari and inevitable sending of smug holiday photos to less fortunate friends back home. Each tent also comes with a lavish bathroom, including a full-sized bath.

Glamping at festivals
The English have embraced the idea of ‘glamping’ with great enthusiasm, which could say more about the unpredictable conditions in the country than its people’s aptitude for roughing it outdoors. A particular hotbed of posh camping sites is around the many annual summer music festivals. Long the preserve of teenagers with barely enough change to afford a basic tent and sleeping bag, festivals now tend to be populated with affluent, middle-aged families whose idea of roughing it is a far cry from a cheaply made polyester sweatbox and a jumper for a pillow.

The king of the UK’s festival scene, Glastonbury, is where many extravagant camping experiences have sprung up. One of the most comfortable is Pennard Orchard, which sits atop a hill overlooking the festival site. Large tipis sleep up to four people in well-maintained beds, while spotless showers and bathrooms are nearby. Food is provided by one of London’s best cafes, The Breakfast Club, including heart-stopping fried food to fill guests up for the day ahead, as well as an impressively long cocktail list that will get music lovers in the mood for a day of fun. The camp has also been known to arrange golf buggies to ferry guests to and from the main gate, averting the need for an often-treacherous late-night walk up the hill.

Desert retreats
Throughout the barren deserts of the Middle East, many travellers sleep under the stars in traditional Bedouin tents. There is no better place for this than the Wadi Rum desert in the south of Jordan. Bedouin tribes have used this area as a trading route between Jordan and Saudi Arabia for centuries. Nowadays, tourists visit to see the location of TE Lawrence’s escapades at the beginning of the last century, while taking in the stunning rock formations and sand-swept landscapes.

Many operators have their own Bedouin camps within Wadi Rum, varying from the quite basic to lavishly decorated. After a hot day of trekking on the back of a camel, visitors return to their camps to find a traditional Bedouin feast. They can while away the evening around a fire drinking sweet Arabic tea, or lie under the unspoilt sky, looking up at the stars.